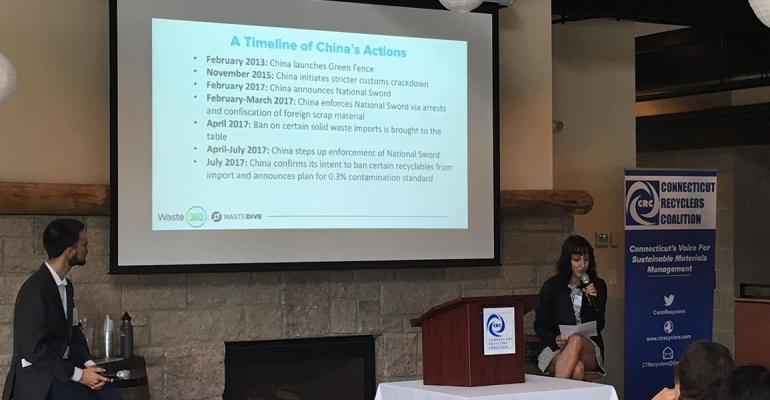 Waste360 and Waste Dive discuss China, glass recycling issues and other challenges in the waste and recycling industry during the Connecticut Recyclers Coalition annual meeting.

China’s National Sword, challenges surrounding glass recycling and other obstacles in the waste and recycling industry were some of the topics discussed during the Connecticut Recyclers Coalition (CRC) annual meeting on September 14.

CRC held the meeting at Stony Creek Brewery in Branford, Conn., and the group invited Waste360 Editorial Director Mallory Szczepanski and Waste Dive Senior Editor Cole Rosengren to address the state of our recycling markets. Szczepanski kicked off the presentation with a timeline of what’s been going on with China over the years—starting with China’s launch of Green Fence and ending with a look of where we stand today. 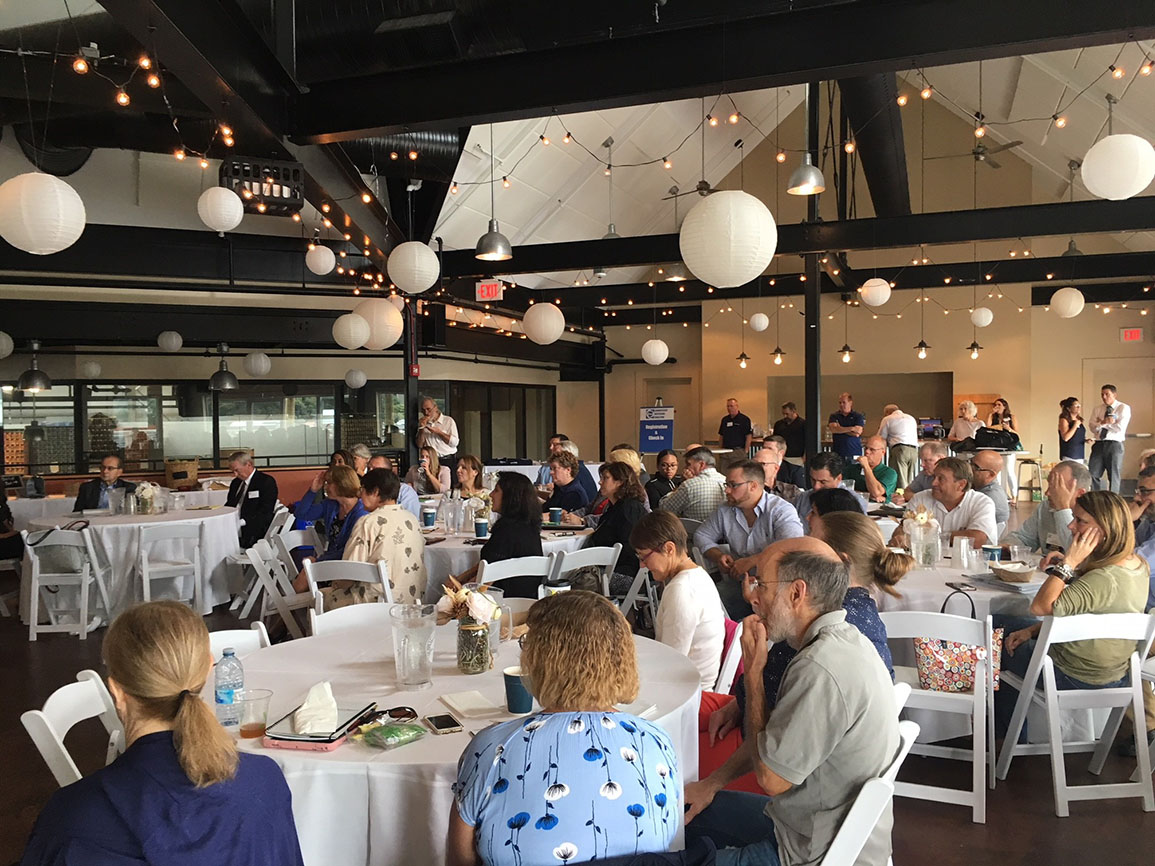 Here’s a recap of what’s been going on with China, as well as some other highlights from CRC’s meeting.

Rosengren noted that last fall, Waste Dive contacted every state agency across the country to compile a list of how individual states were handling the new regulations. At that time, he said about a third of the states reported having issues, but that has since changed.

“In our view, 13 states were feeling this heavily—meaning canceling programs widespread and big disruptions,” said Rosengren. “When we started doing research, we found that a lot of states don’t have policies in place like Connecticut does … We have started seeing a fair amount of restrictions mainly in smaller cities and towns, but we have seen them in larger cities as well. Some cities were saying they would cancel programs, but they get a lot of pushback.”

“The good news is there is work happening,” he continued. “There are organizations—like ISRI [Institute of Scrap Recycling Industries] and SWANA [Solid Waste Association of North America]—engaging frequently with the EPA [U.S. Environmental Protection Agency] and officials, urging some action. But it ultimately falls with the states to deal with this.”

The biggest takeaway that Szczepanski recalled from industry events and earnings calls is: Recycling is not dead.

“We are currently facing a lot of challenges, but we’ve gotten through challenges in the past and we will get through them again,” noted Szczepanski. “I think the main thing is a lot of people see China as a crisis, but some people also see it as an opportunity for domestic infrastructure, more recycling or new best practices to be put in place. I think this is an opportunity for us to get more people involved and more residents excited about doing the right thing—and recycling is the right thing. Right now, there are some challenges, especially with some end markets no longer being there, but I think there is a lot of opportunity to come. I think the important thing now is to not give up on recycling. It’s still the good thing to do. It’s still the right thing to do. And there is still opportunity there.”

She added other challenges that the industry is facing, including labor and mechanic shortages and safety issues. Szczepanski stressed the importance of reaching out to people and letting them know that going to a trade school rather than a college or university is OK.

“There are opportunities here for you,” she said. “Even if you don’t have a background or know the industry, you can learn. The great thing about this industry is people are willing to give you hands-on opportunities to learn and grow.”

Each year, the industry continues to make the top 10 list of the most dangerous jobs in the U.S. But Szczepanski pointed out that the industry has been taking steps to reduce injuries and fatalities—mainly via technology.

And contamination is still the big ongoing issue. Szczepanski suggested that local municipalities conduct waste audits to determine what residents are still having trouble with when it comes to recycling properly.

“They just might not know,” she explained. “If you’re seeing a lot of contamination with plastic bags, for example, set up drop-off centers where the bags can be brought to be recycled and reused. The key to reducing the contamination in the bins is knowing what materials are contaminating the bins and all of your waste reduction, recycling and reuse options.”

During the event, attendees expressed concerns about the challenges that come with recycling glass. They asked Szczepanski and Rosengren what trends they were seeing in the glass recycling market.

“As far as I know, there is not much of a demand for glass in the Northeast at the moment,” said Rosengren. “The best solution we’re seeing so far are construction-aggregated solutions. For the most part, you don’t want to transport glass too far. Right now, we’re seeing glass getting dropped in a lot of places. On the flip side, we’re not seeing glass getting dropped yet from any state policy. Massachusetts, for example, just came out with a new state standard. They had seven or eight of the state MRFs [materials recovery facilities] asking if the state could take glass off the list, and Massachusetts said ‘no, the state was not willing to budge on that.’ And that’s the case in a lot of states right now.” 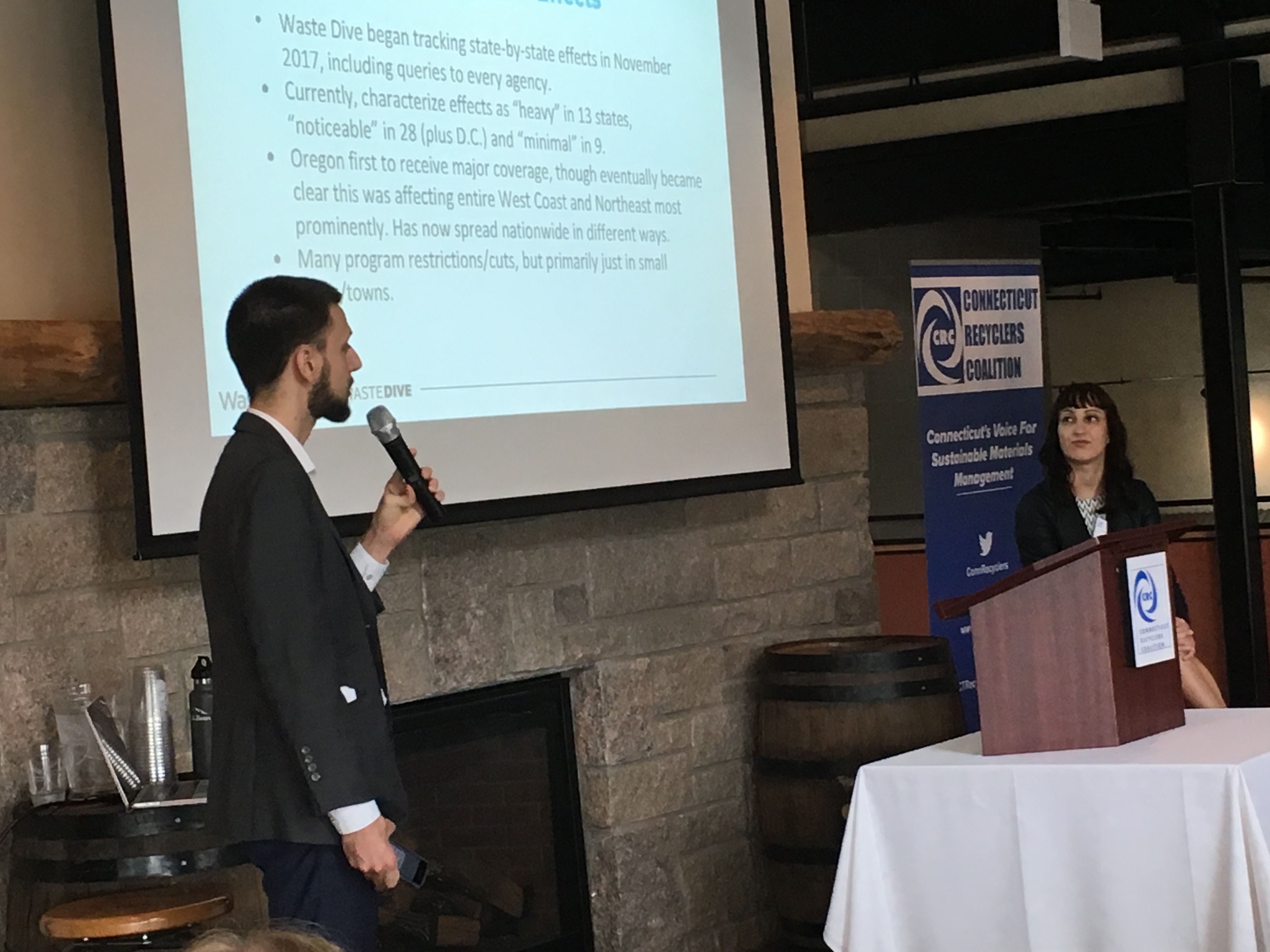 One attendee, who is also a representative for Republic Services in Connecticut, stressed that recycling is not going away.

“It’s still going to be a critical part of the services we deliver to communities, but the difference is the economics and willing to pay,” he explained. “In this part of the country, it’s not going to be more expensive than waste, but it’s not going to be less expensive than waste either. It’s just similar, and the whole problem is the fact that, for decades, this industry was set up on an economic model where the value of the material paid for everything and then maybe had something left over for the partners in that investment, and that’s just not the case.”

“Now, material is moving, but I think there are two things communities can do: they have to understand the economics of recycling and the quality of material coming out of the residential stream; there’s a tremendous need for education,” he added. “There’s a lot of aspirational recycling going on out there. Residents really want it to be recyclable and they really believe it should be, but it makes the whole process unproductive and inefficient and, quite frankly, it shuts facilities down periodically.”

“I think a lot of people have given up on glass recently, and it’s something that does need to be taken care of,” explained Szczepanski. “I think right now a lot of people see glass as a commodity that’s not valuable, so they don’t want to put a lot of money into it because they aren’t getting profit back. It’s also a safety hazard for people picking things out of the stream. Right now, we are just in the early stages of utilizing technology in the industry. I do think there are opportunities for glass recycling, but I just don’t think there’s enough information from pilot programs or research to prove that there's a technology out there that everyone should be using to handle glass. I do think there is an opportunity there in the future, however.”

Rosengren added that it will come down to how glass impacts the value of OCC (old corrugated cardboard), other fibers and MRF operations. “That’s the problem with glass right now. It could impact the value of other materials but has a low value itself,” he said.

And when moving toward zero waste efforts, one attendee asked if there are increasing efforts for design for the environment and design for the facility so that material doesn’t end up in the trash.

“We are seeing and having conversations with people and businesses that think about end of life during the design process,” said Szczepanski. “Product designers and manufacturers should be thinking about this in the beginning of the design process, and there are a lot of steps people are taking to do just that. Furniture companies like Steelcase and Herman Miller and vehicle manufacturers like General Motors are just a few examples.”

Szczepanski also stressed that major players like Amazon need to step it up when it comes to improvements in packaging and waste reduction.

Closing out the keynote session, Rosengren and Szczepanski discussed market development, education and communication trends and what the future may have in store for the industry.

"Based on conversations I've had with members of the industry, I think we will see more domestic infrastructure, new possible end markets and advancements in technology," stated Szczepanski. "This is an ever-changing industry, and there is always room for improvement."