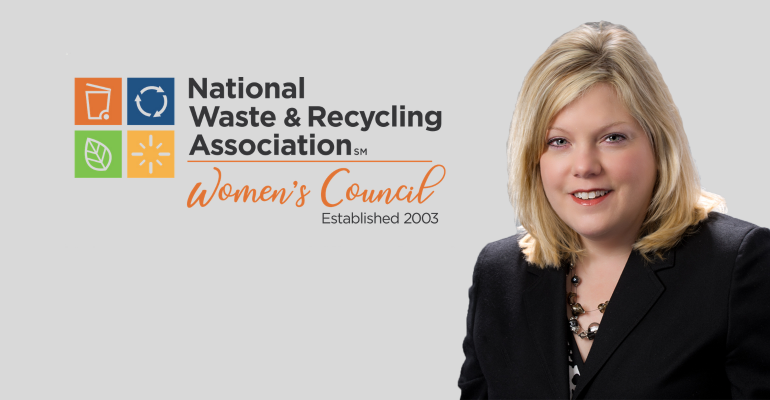 When Lisa Disbrow was deciding what she would major in at college she opted for political science instead of history because she said it sounded like it had more career opportunities. But little did she know that it would only take one to kick start a career with Waste Management that has lasted more than 20 years and counting.

While in college, Disbrow’s roommate’s sister was working for Waste Management and encouraged her to apply to their newly established government affairs department thinking her political science degree and her own interests would make her a good fit. Now, more than 20 years later, Disbrow still works for Waste Management and she is now the Director of Government and Public Affairs for the Illinois, Missouri Valley area – a five-state region that includes Illinois, Missouri, Kansas, Iowa, and Nebraska.

Disbrow also became involved with the National Waste & Recycling Association (NWRA) early on in her career as a representative of Waste Management.

“When I started working for waste management, as part of the government affairs team, I started with the Illinois chapter. That was the first chapter that I attended a meeting and went on behalf of the company and became involved. I’ve been involved in several state chapters as a representative of Waste Management,” said Disbrow.

In 2019, Disbrow was named as the first woman to serve on the NWRA Board of Trustees and she was appointed as Chair of the Services Board of Governors – another first for women in that position.

When she was appointed, Ben Harvey, president of E.L. Harvey and Sons and chair of the NWRA Board of Trustees said, “Lisa is a tremendous asset to the association and industry. She is a strong advocate for the waste and recycling industry, and I know that will continue as she serves on the Board of Trustees. I welcome our new members and alternates to the board. The diversity of our board helps make NWRA a stronger advocate for the waste and recycling industry.”

NWRA President and CEO Darrell Smith said in a statement, “Lisa has a wealth of knowledge and experience in the waste and recycling industry. At a time when we are trying to encourage more women to join the industry, I am proud to have Lisa on the board.”

“I’ve been on the Services Board of Governors for quite a while and it’s really an honor to be elected as the chairperson,” said Disbrow. “The board is comprised of representatives from the individual state chapters. They’re elected by the state chapter to represent on the National Board of Governors that brings together industry leaders from all different states and different companies. It really allows us as an industry to talk about issues that are impacting our industry and discuss and share ideas and best practices.”

A great example, she said, was the Slow Down to Get Around legislative initiative. “I’m not sure where that idea started but I think it started in one of the state chapters and then it was shared and it’s an initiative that all of us are concerned about and it kind of launched from there,” she said.

Today, more than 30 states have passed Slow Down to Get Around laws including the five states Disbrow oversees for Waste Management. She said working with the state of Kansas and some others to pass this legislation is some of the work she is most proud of and brings the biggest sense of accomplishment.

Disbrow said another project she was proud to work on was  from 2018 when “the Illinois chapter of NWRA reached out to the Solid Waste Association of North America (SWANA) Illinois chapter to form a working group to address recycling contamination and to work with our local government partners to help drive an education message to the community so that we were in-sync in our messaging on contamination.”

“There’s been a lot of good synergy that has come from that effort,” she said.

In addition to large, collaborative projects, Disbrow also manages state-level government affairs and communications which is both internal and external communications, she said.

“In this industry, you walk into your office and you think you know what project you’re working on, or what you’re going to be doing that day and then you can answer the phone and you’ll go in a totally different direction. This is how the industry works. And why it makes it an exciting industry to be part of,” said Disbrow. “I work a lot more with other lines of business so there’s a lot of collaboration with my colleagues both from operations and sales and also several of my corporate colleagues as we work as a team across the company to work on enterprise-wide initiatives.”

One of the latest projects they’ve been working on she said, is a new app for Waste Management employees that helps employees access information about their benefits, company news and other information. She said it’s come in handy during the COVID-19 pandemic.

As for the future, Disbrow said she thinks safety will continue to be a core issue for the industry and recruitment. She said there should be more highlighting of the opportunities in the waste industry showing the next generation that there are a lot of different career paths in the waste and recycling industry.

“I think sustainability, environmental sustainability, will be a key piece. One of the things that I was really lucky to be part of early in my career, is that the U.S. Environmental Protection Agency (EPA) subtitle D regulations for landfills was adopted and finalized in 1992. So, I was really able to participate a little in the implementation of those regulations when they were put in place, and really help educate the public on what that means, what those regulations really mean and how the landfills that are built today are engineered. And, not you know, the facilities that your grandparents or great-grandparents might recall from their childhood. Big difference,” said Disbrow.

When she started her career more than 20 years ago, Disbrow said there were some women in the industry at the time but now there’s just a lot more and in different roles.

“There’s just a lot more women that have joined this industry and it’s really cool to see. You know, we have women drivers, technicians, along with engineers and VPs,” she said. “Throughout this entire industry, one of the things that I always thought was really cool when I started at Waste Management, was that you would meet people that started as a driver and they’ve worked their way up to become the vice president in the organization. It’s a very dynamic industry that allows you to grow and to advance your career.”

Considering Disbrow has worked for Waste Management for more than 20 years she could say she is an example of that.

“There are a lot of greater examples, I guess I would say, but it’s been a lot of fun. It’s always been a really engaging job,” she said.