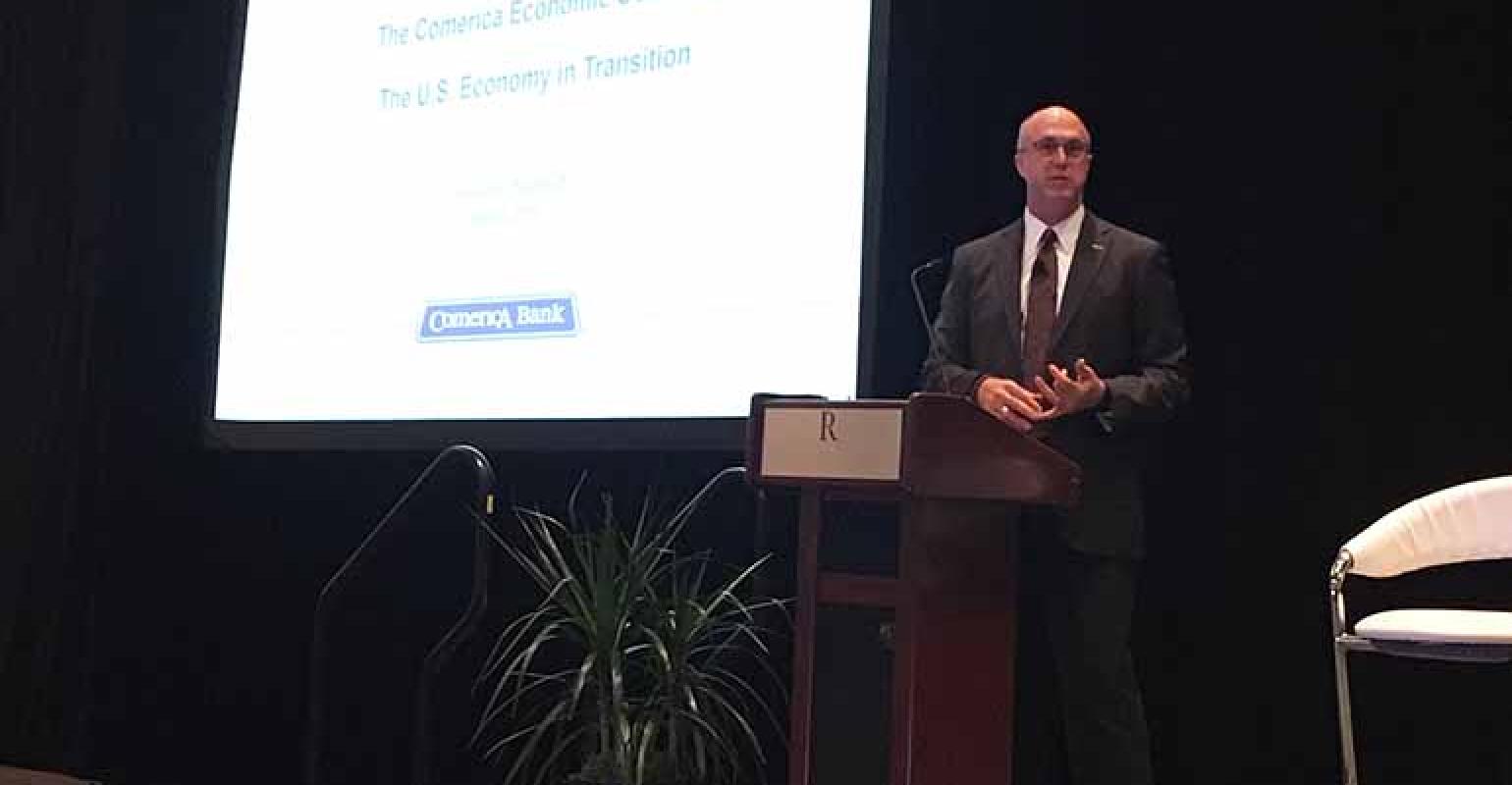 Here are some of the key highlights from the May 8 Waste360 Business Growth Forum at WasteExpo 2019.

During the new Waste360 Business Growth Forum (BGF) at WasteExpo 2019, hosted by Comerica and designed for small and midsized environmental services companies looking for business and financial strategies that go beyond day-to-day operations, Robert Dye, chief economist for Comerica Bank, told attendees that the economy is cyclical and always in transition, meaning neither the same recession nor the same expansion will happen twice.

“The economy revs up and down rather than operating at a steady state for long periods of time,” he explained. “Time doesn’t cause recessions. But time allows the imbalances to build up that cause recessions.”

When thinking about how the current state of the economy is impacting waste business operations, Dye explained there is a low unemployment rate and tight labor market, making it more difficult to recruit workers.

“If you’re looking to hire someone for your business, you’ve got to do it the old-fashioned way: you have to steal them from someone else, which means you have to pay them more money,” he said. “And that’s about three-quarters of operating cost for most businesses.”

The downside, he explained, is economic risk factors increased late last year. The lack of a trade deal between China and the U.S. has impacted China’s economy, and Europe—amid Brexit—also is cooling down and nearly skirted a recession in 2018.

In the U.S., the housing market typically pushes the economy forward, but it hasn’t done that. It has been trailing the economy, added Dye, with new and existing home sales looking weak.

“We have a lot of millennials who are saddled with student debt and have not been able to get into the housing market,” he explained. 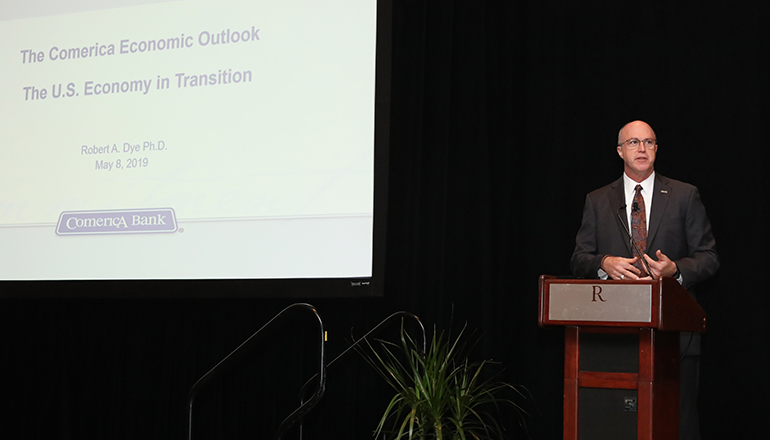 Another risk factor to keep an eye on is the wind down from last year’s tax reform in the U.S.

“We have the potential for a fiscal cliff,” noted Dye. “By that I mean the way budget laws are written in Washington. Going into fiscal year 2020, there is a mandatory drop on federal government discretionary spending. We had the half percent boost in 2018 because of tax reform, but we are getting ready to eat it all up in 2020.”

“If there is a weak link in the U.S. economy right now, it is the corporate sector,” he added. “It was a household and housing combination last time around. Wages are going up because the labor market is so tight. Capital costs are going up, and you’re paying more in loans right now. So, costs are going up, and at the same time, inflation has been fairly steady. You don’t have a lot of pricing power and something is getting squeezed in the middle, and that’s your margin. We often see a corporate profit squeeze at the end of the business cycle. I just want you to keep this in the back of your mind.”

Dye explained that moving forward, he will be watching the corporate state of the economy extensively. The rule of thumb is it takes three big events to push the U.S. economy into a recession—that may be one of them, he said.

“When unemployment is high, wages tend to be low. We are seeing that effect now, and you are all seeing that,” he reiterated. “When wages are low, companies are making profits. When wages go up, your margins are squeezed and you’re not making profits. It’s something to watch out for the back half of this year into early 2020.”

Here are some additional highlights from the May 8 BGF:

During a panel session on “Success Stories,” moderator Matt Breight, senior vice president and group manager for Comerica Bank, spoke with panelists Charlie Appleby, chairman of Integrated Waste Solutions; Joe Winters, chairman and CEO of Winters Bros. Waste Systems; Scott Earl, founder and CEO of County Waste Virginia; Bart Powell, founder of Right Away Disposal; and Robert Michalik, managing director of Kinderhook Industries, about some of the key factors that have attributed to their companies’ success. 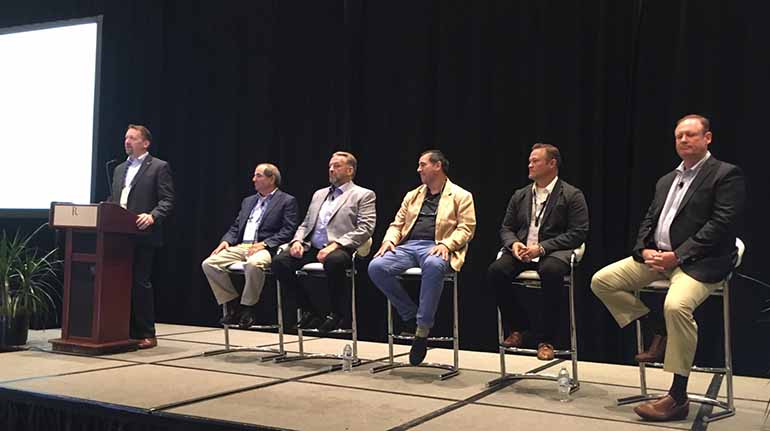 Winters also noted the importance of having the right people around. He added that communication within the organization is extremely important.

“At Kinderhook, the philosophy has always been you need to run companies like you’re going to own them,” Michalik pointed out. “Build your enterprise like you want to own it. Think about your business as something you will maximize. The best companies get bought at the best values.”

During a panel session on “Organic Growth,” a panel of experts discussed the process of organically growing their waste businesses. Moderator John Shegerian, co-founder and executive chairman of Electronic Recyclers International (ERI), spoke with panelists Kevin Atkinson, owner of Texas Pride Disposal; Jason Haus, CEO of Dem-Con Companies; Tom Vaughn, chief operating officer of DTG Enterprises; and BJ Harvey, president of E.L. Harvey & Sons, about some of the best practices for finding growth in the business. 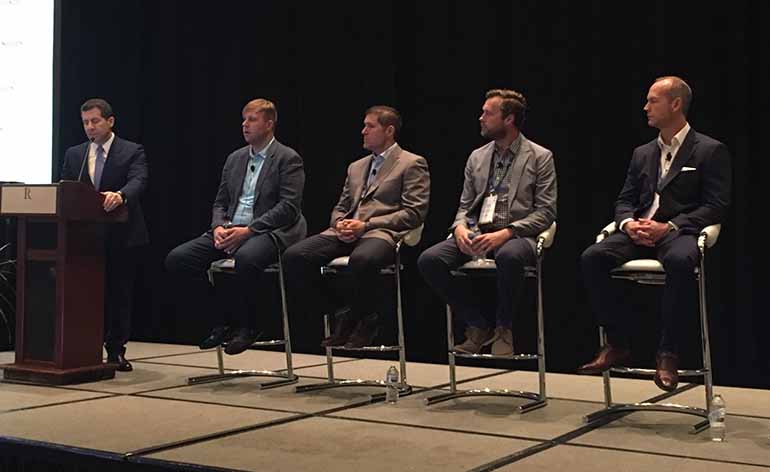 Harvey emphasized the importance of embracing technology for more efficient business operations. He said the company has equipped its trucks with cameras to monitor driver behavior and incidents. Vaughn added that DTG has embraced technology for its frontline managers to help be “real-time managers” rather than reactive managers.

When asked if employee retention is a big deal, Harvey said, “It’s a huge deal. That has a been a main topic here at WasteExpo. Retention is a huge piece to us internally.”

Harvey noted the company is continuously adapting and changing its health insurance plans and bonuses to better meet employees’ needs. The company also holds regular cookouts and events for employees, which help with retention.

“I think for us, one of the biggest challenges is the growth part,” explained Haus. “We have pretty good retention, but it’s finding the additional people to come onboard. Getting people in to let them know they are not just pigeon-holed into one aspect of the business and that there are a lot of great opportunities here has been challenging.”

Atkinson noted that Texas Pride Disposal also offers employee cookouts and bonuses and has been focused on enhancing its company culture. “I think the challenges we see are similar,” he said. “Not so much on the retention side, but we have been chasing the tail of our own growth and it’s been a challenge getting more employees to come on.”

Vaughn added that at DTG, communication is key to keeping employees over the long haul and that every 90 days, every hourly employee gets a 1 percent raise, no questions asked.