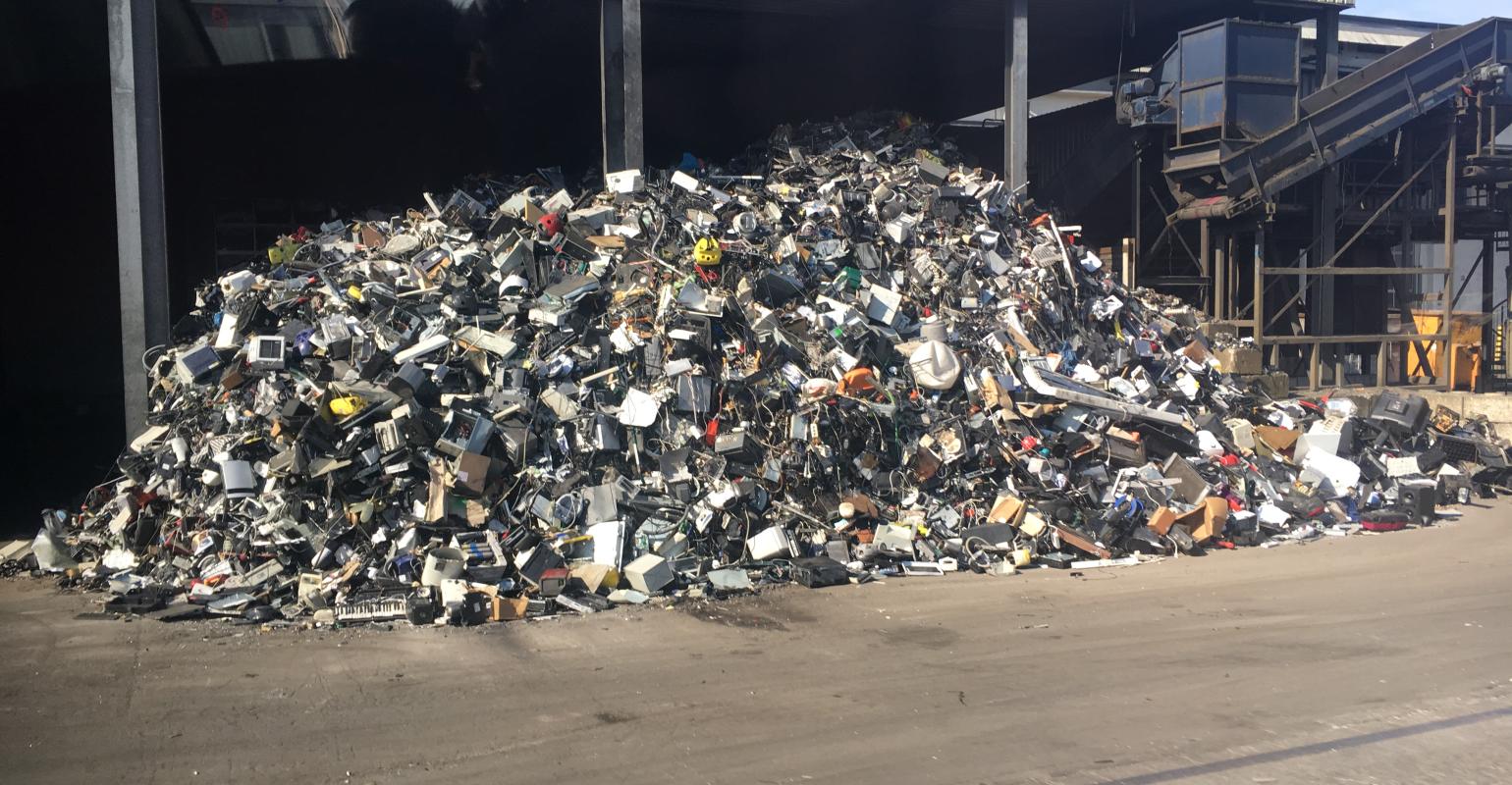 The members had a chance to see where some of the recycled material is stored and processed for reuse.

Led by Dr. Michael Rose, director for REMONDIS Dusseldorp Rioolservice (Sewer Service), the group took a bus tour around the campus to see where some of the recycled material is stored and processed for reuse. The Lippe Plant spans 230 hectares (568 acres) and has a carbon footprint of negative 496,000 tons in Lünen, Germany. It receives about one million tons of residual materials per year and puts out about 500,000 tons of recycled material for reuse in the industrial production cycle.

For example, Lippe Plant receives FGD gypsum from power stations and processes it for reuse in the construction sector. On the tour, Dr. Rose took the group through the storage facility where the gypsum is kept.

“The brighter the color of gypsum the better quality,” says Dr. Rose. “We market it to the dentists to make plaster, but most of it goes to the cement industry.”

Near the gypsum storage facility is the organic waste treatment station and storage area where biodegradable kitchen and garden waste is processed and turned into compost and earthworks. Each kind of soil and mulch is organized and clearly labeled outside of the processing station.

Further down the road from the organics station is SecAnim, a REMONDIS-owned company that disposes of high risk animal by-products. Dr. Rose said it cleans up slaughter house waste and other dead animals from farmers and veterinarians. To close the loop, SecAnim recovers animal fat that is then turned to biodiesel. It also recovers material for making leather and producing meat paste as fuel. As the bus rounded a corner, the tour group could see a massive mound of technology waste or what Lippe Plant calls waste electrical and electronic equipment (WEEE). Dr. Rose said residents can bring their old electronics to dump for free. Those items are then sorted into four categories: large domestic appliances, display equipment, small domestic appliances and refrigerators and coolers. The WEEE is dismantled and processed for reuse except for capacitors, refrigerants and blowing agents, which are sent to hazardous waste incineration plants.

The Lippe Plant also collects several types of timber that is processed into fuel, which powers the electricity used at the plant.

“We get wood from Germany, the U.K., France, Belgium, the Netherlands—here we have 200,000 tons of wood that is sorted by quality,” says Dr. Rose.

After the bus tour, Dr. Rose gave a presentation on the history of REMONDIS and how the business operates.

The REMONDIS Group has been run by the Rethmann family for the last 80 years, and in 2017, it employed 74,000 people in more than 800 locations in more than 30 countries, offering three fields of business—recycling, public services and water treatment. The FILA group members on the tour said they were all impressed with the facility.

“REMONDIS, as a whole, the diversification and what they do—it’s hard to say diversification because everything that they do somewhat ties together—but at the same time there’s a bunch of different things they do to accomplish a goal. And what they do that’s interesting is the complete closed loop solution,” says Brett Belda, FILA board member and regional sales manager for SSI Schaefer Systems International, Inc.

He went on to say that “it was really awesome to see” that REMONDIS essentially thinks of nothing as waste, and it’s processing and cleaning items or taking it to the incinerator and everything is being reused.

“Everything’s closed loop in terms of everything they’re doing. There’s really no waste coming out of that facility and their organization, especially the one we toured,” says Belda.

“They’re taking recycling to the next level,” says Mike Schmidt, FILA board member and executive vice president of strategic growth and development for Gold Metal Environmental. “I found the public-private partnerships intriguing—that the municipality owns 51 percent. By doing this, it gets rid of the risk of going out to bid every couple of years, and this way, the municipalities get to share in the success. I’m not sure if that’s something we can do in the United States.”

Liza Casella, FILA board member and director of solutions development and coordination for Casella, said she was impressed with the aesthetics of Lippe Plant and the organization of the layout.

“For me, when you go to one of our facilities, we like to say that we want you to feel like you’re driving into a country club, not a waste facility, and that’s what they had,” she says. “It would’ve been interesting to see it on a fully operational day. I’m going to take back with me how they set everything up and their branding—you didn’t need to get off the bus to understand what was going on. They’ve figured out the full scope operation, and they have a grasp on the marketplace we haven’t yet figured out.” David Marcouiller, FILA member and executive vice president of the sales engineering group at Machinex, said he was surprised by how vertically aligned everything is. “That’s something we don’t do and could take back to North America,” he says.

On Sunday, REMONDIS hosted the FILA group for dinner in Munich, where members learned more about the company and shared ideas over a traditional German dinner.

Casella said she liked having the opportunity to sit at dinner with the REMONDIS CEOs and board members like Egbert Tolle. “It’s nice to hear their history and experience in the industry,” she says.