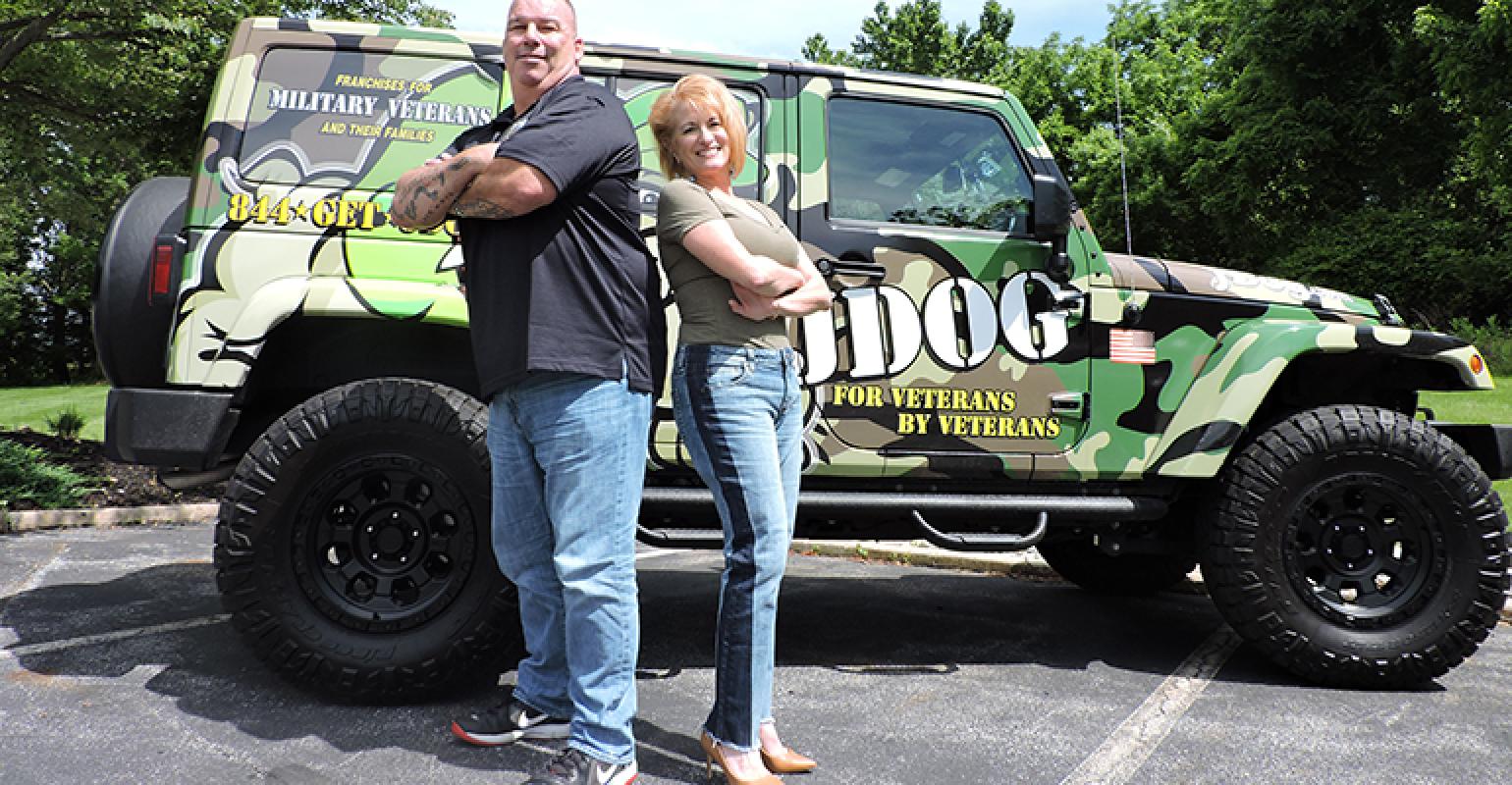 Transitioning from a military lifestyle to a civilian lifestyle is not always an easy feat, but Jerry Flanagan, U.S. Army veteran and founder of JDog Junk Removal & Hauling, is helping to make that transition easier for veterans.

What started off as a neighborhood junk removal service with one Jeep and one trailer flourished into a company with more than 200 locations across the country that serve more than 40 million Americans.

“After working for other people and then venturing out on my own to run my own businesses, I learned very quickly that you need to have enough capital to carry your off season. With the Halloween store, most of my money was tied up in inventory, so I had to close down and think of another idea,” says Flanagan. “Four years later, my wife and I launched a birthday party supply store. We had a great business model and sold six franchises in the first year, but the economic crash in 2008 caused us to downsize quickly and ultimately file bankruptcy. We lost pretty much everything, and that’s when I started looking into ‘recession-proof’ industries.”

Waste management and junk removal kept coming up in Flanagan’s Google searches, so he decided to give the industry a try. He bought a trailer with the little money he had and started hauling junk in his neighborhood with his Jeep and trailer. After about two weeks, a customer said he should promote that he’s a veteran because he’s polite, clean-cut and works hard. He had been out of the military for so long at that point that he didn’t think it was relevant, but he decided to switch his business over to veteran owned and operated (the company’s name, JDog, is a play on the military term wire dog and the first letter of Flanagan’s first name), and that’s when the company really took off. 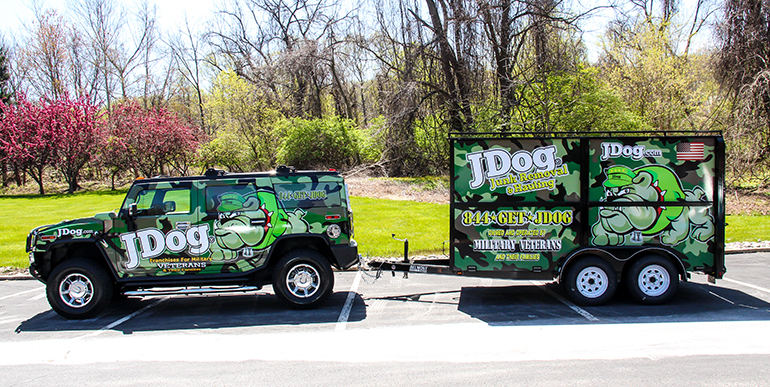 “I went from one truck and one trailer to adding more employees and filling up our calendar seven days a week,” says Flanagan. “I decided to start franchising the operation but quickly realized I couldn’t do that and haul the junk at the same time. So, I turned to Julip Run Capital to see if they wanted to invest in the business, and they said yes. We still control the company, and they have helped us build the company from five locations in 2014 to more than 200 locations to date.”

JDog Junk Removal & Hauling’s locations recycle, refurbish or reuse about 60 to 80 percent of what they collect, and they work with organizations, such as VIQTORY, which owns G.I. Jobs; Orion Talent, which works directly with vets; and RecruitMilitary, another vet organization, to recruit veterans into the business.

One veteran who landed a career at JDog is Jim Andrews, a former master-at-arms for the U.S. Navy, a general manager who services the Upper Bucks County region and the Greater Lehigh Valley of Pennsylvania and a military committee chair for the Lehigh Valley Business Group.

Andrews joined the military at age 27, with the expectation that he would become a police officer after he got out. But when he got out, at age 32, he had a different mindset and decided to explore other possibilities.

“I didn’t really want to go through the game of being broken down to be built up anymore, so I ended up responding to a friend’s Facebook post about a position he had open at his porta potty and septic business, which is something I never thought I would do,” says Andrews. “After about a year and a half, I decided to look for a new job and came across a job description on Indeed for a general manager at JDog. When I read the job description, I felt like it was written for me, so I applied and ended up getting the position.”

For Andrews, working at JDog has been both fulfilling and self-sufficient. He has helped the location grow over the last three years, and he has been able to help a wide range of customers with various needs.

“One of the main highlights of my job is learning our customers’ stories and helping them with whatever I can,” states Andrews. “Whether they are vets themselves or have family members and friends in the service, I am happy to help them out and let them know we are here for them.” 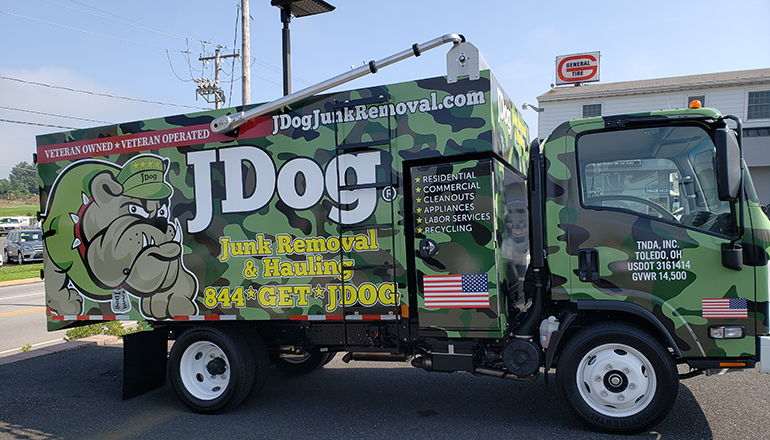 Andrews points out that JDog is more than just a junk removal company. The company helps customers through transitions (e.g. cleaning out the homes of those moving into a senior living home or those who have passed), fulfills donation needs, stages homes for renting or selling after the cleanout is finished, assists veteran organizations with some of their needs, etc. In his eyes, JDog employees are problem solvers, entrepreneurs and hustlers, and they also have a sense of purpose, which is important to veterans who are used to having missions to accomplish.

“Over the years, we have also been able to help out homeless veterans by assisting veteran organizations like VALOR,” adds Andrews. “They have a place in the Poconos called Paul’s House that helps homeless vets get on their feet. They help with job placement, resume writing, housing and more, and we have helped them furnish veterans’ apartments via donations from our cleanouts.”

JDog is also part of Veterans Advantage, which provides military discounts for a wide variety of services, and runs The JDog Foundation, which is headed by Ralph Galati, one of JDog’s strategic advisors and a prisoner of war. The foundation’s mission is to develop and implement programs and services that support veterans and veteran-related groups and to provide funding and related assistance to individuals and organizations that provide benefits to veterans.

Building on its success, JDog recently launched JDog Carpet Cleaning, a new franchising opportunity for veterans and military family members that leverages the JDog brand to bring floor cleaning services to customers across the United States. JDog plans on adding 10 more services under the JDog brand in the future.

“Looking ahead to the future, I hope to see every zip code in the U.S. have some sort of JDog service available,” states Flanagan. “I know it’s a difficult task, but I would like to see JDog service areas that the big franchise companies aren’t really interested in, such as Bismarck, N.D.; Helena, Mont.; Cheyenne, Wyo.; etc. My goal is to give veterans job opportunities no matter where they are located, and I would ultimately like to have about 50,000 vets working at 5,000 locations around the country.”