It’s no secret that safety in solid waste collection is a major issue. Each company and municipality works to teach best safety practices, yet accidents and injuries still occur. In fact, according to recent Bureau of Labor Statistics numbers, the waste and recycling industry remained the fifth most dangerous occupation in America in 2014.

Injuries occur in all sectors of the waste and recycling industry, but Volvo Group expects its Robot-based Autonomous Refuse handling (ROAR) system to reduce the risk of injury for collection drivers.

Instead of a team of human workers, Volvo’s robots will receive instructions from operating systems to do the heavy lifting and dumping. Drivers stay put, overseeing the controls.

The manufacturer currently is working with Chalmers University of Technology and Mälardalen University in Sweden, Penn State University, and the Swedish waste and recycling company Renova, to develop a robot that interacts with refuse trucks and drivers to accomplish the work in a quieter fashion, relieving haulers of the physical stresses of the job. 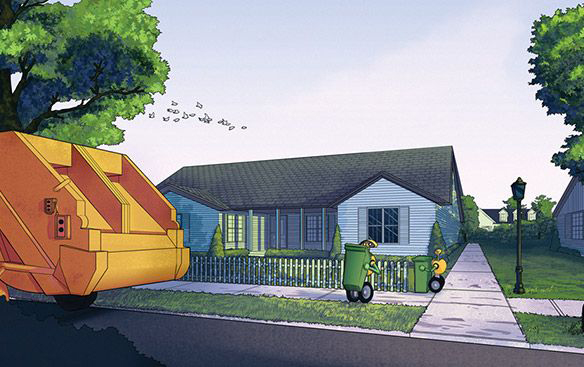 Automated collection is not new to the waste industry. More and more municipalities are automating collection to save on labor and cut down on injury-related insurance costs. But Volvo and company are taking the approach to the next level.

The purpose of ROAR is to demonstrate how society, in the very near future, will use smart machines to assist with a broad range of activities. This technology, which is scheduled for live testing in June 2016, can be applied in many areas. Refuse collection is just one example.

“Within Volvo Group we foresee a future with more automation,” Per-Lage Götvall, project leader for the Volvo Group said in a statement. “This project provides a way to stretch the imagination and test new concepts to shape transport solutions for tomorrow.”

If the idea of a robot riding shotgun along solid waste routes and zipping to the curb to pick up and empty garbage-laden bins seems a bit too futuristic, consider the Oxford University 2013 study, “The Future of Employment: How Susceptible are Jobs to Computerization,” which predicts that 47 percent of U.S. jobs could be automated within one to two decades.

The study also points out that in the past decades, industrial robots have taken on the routine tasks of most operatives in manufacturing. Now, however, more advanced robots are gaining enhanced sensors and manipulators, allowing them to perform non-routine manual tasks – maybe even rolling out a full solid waste cart and dumping it in the truck.

After all, robots are doing more than just factory jobs. Most materials recovery facilities (MRFs) already use of a mixture of advanced sorting technologies supplemented by human hand sorting. Finnish engineering firm ZenRobotics has installed its automated sorting technology from Helsinki to Finland to New Jersey.

But what if you could deploy a free-roaming robot in a variety of environments (such as along garbage routes, at commercial landfills or transfer stations) and have it identify and sort all manner of recyclables using sensors akin to those at work on an advanced MRF line?

General Electric, for example, has used robots to climb and maintain wind turbines, and more flexible surgical robots with a greater range of motion are performing more types of operations. Vanguard Plastics Corp, a precision injection molding company in Connecticut, uses Baxter robots, which much like the ROAR concept, work in collaboration with human workers, to complete their tasks. These robots have a $25,000 base price, according to the manufacturer website.

Technological advances are contributing to declining costs in robotics. Over the past decades, robot prices have fallen about 10 percent annually and are expected to decline at an even faster pace in the near future, making them more accessible to industries like solid waste.

For the ROAR project, the three universities are part of Volvo Group’s Academic Partner Program, a network of twelve academic partners collaborating with Volvo for long-term cooperation in research and recruitment. The students have different tasks and roles.

Mälardalens University is designing the robot itself, and Penn State´s Thomas D. Larson Pennsylvania Transportation Institute is working on the graphics, communication systems and control panel for the truck driver. Students at Chalmers University are working on the overall operating system. Renova is developing the vehicle.

“Chalmers has for many years developed the technology for the control and coordination of autonomous systems, and we see that we can deal with problems of the complex type that waste handling entails,” Petter Falkman, associate professor of automation at Chalmers said in a press release. “This will be a fun and challenging project for our driven researchers and motivated students.”