Biogas as a Resource: Breaking Down the Benefits and Potential Roadblocks

When food and yard waste are landfilled, those organic materials become a source of methane emissions contributing to global warming and climate change. But biogas—primarily composed of methane and carbon dioxide—is produced from the breakdown of organic matter via anaerobic digestion (AD) and can be utilized as a sustainable renewable energy source.

During a June 20 forum titled “Tapping New York City’s Biogas Resource,” the New York League of Conservative Voters Education Fund (NYLVCEF) and Energy Vision brought together global and local experts to discuss some of the potential benefits—and challenges—when it comes to leveraging biogas to help mitigate climate change and other threatening environmental issues.

Related: Is NYC Ready for the Green New Deal?

Eric Goldstein, New York City’s environmental director for the Natural Resources Defense Council (NRDC), explained that NRDC’s long-term objective has been transforming the city’s waste system from one that has a primary reliance on landfilling to recovering resources, composting and recycling, which he says are becoming the cornerstone of 21st century waste policy in New York.

Goldstein, who spoke during the first panel, “Organic Waste to Fuel: What is Biogas? How Can it be Used?,” was joined by Brian Paganini, vice president of Southington, Conn.-based Quantum Biopower; James Bier, senior project developer with Ameresco; and Charles E. Love Jr., director of renewable energy for Love’s-Trillium.

The panel’s moderator, Chris Voell, waste, recycling and biogas lead for the Danish Trade Council, kicked off the panel discussion by comparing the renewable gas grid in Denmark to the U.S. He explained that 11 percent of the volume in the natural gas grid in Denmark is renewable natural gas (RNG)—and that number rises each year. Denmark expects that by 2030 or so the country will transition to 100 percent green gas. 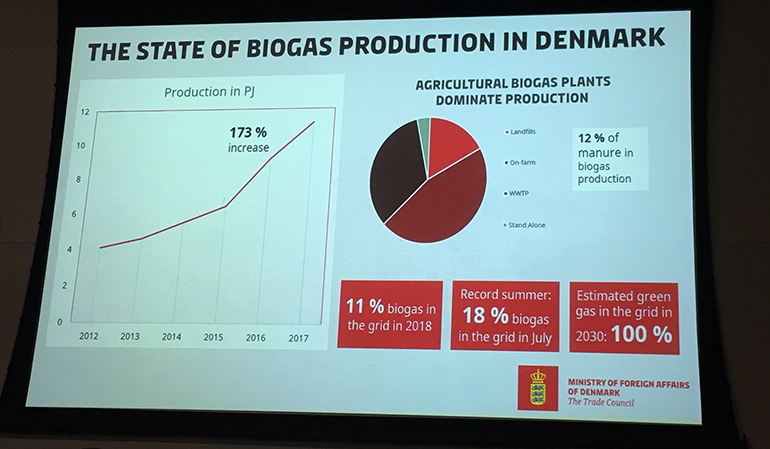 “There were a lot of political initiatives and subsidy schemes, energy infrastructure that had to be upgraded and cross-sector collaboration that had to be done,” he explained. “A lot had to happen for this to really take hold. I think that’s the opportunity that New York City and New York State have in this.”

For New York, one of the major challenges to overcome in order to beneficially use all its organic waste is addressing contamination. Beyond that, Goldstein pointed out, there are two big caveats.

“The first is that, from an NRDC standpoint, we need to ensure the digestate at the end of the process is going to be used as fertilizer for soil management,” he said. “We cannot landfill it or dispose of it in other ways and pretend that strategy is a sustainable one.”

“The other caveat is we are concerned that the support for anaerobic digestion and biogas will become a vehicle for building additional fossil fuel pipelines and natural gas infrastructure,” added Goldstein. “We know that despite lack of action from the federal government, states are acting very aggressively.”

“If we are going to set those goals, we are going to have to change in very significant ways,” noted Goldstein. “What we don’t want to do is take a sustainable supply of energy, like organics used in biogas, and use that as an entry point for the continued use of natural gas. And I know there are probably folks here who disagree with that, but to us, this industry has a choice. We can be perceived in a way that is sustainable and that has widespread work to create winners across the board or you could decide that you’re going to go a different route. Despite the many benefits and attributes of biogas and AD, I’m afraid that following that path will lead to delays and political battles.”

Quantum Biopower, one of the only anaerobic digesters in the Northeast, built its digester back in 2013 to help meet the unmet need of commercial recycling in Connecticut and the region, explained Paganini. The plant began operations in 2016 after three years of permitting. 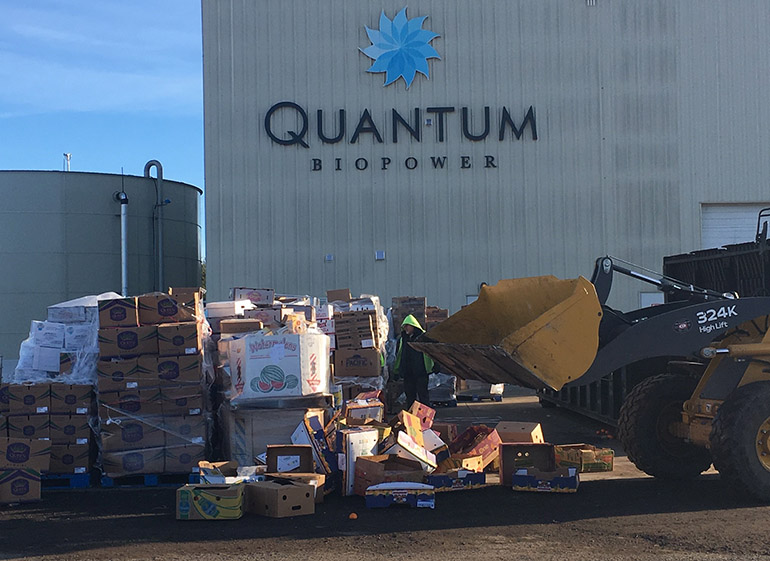 Quantum processes roughly 40,000 tons of food waste annually, producing energy to generate power for households and businesses. Paganini said the AD process recycles methane, which offsets 5,080 tons of carbon dioxide emissions annually. The system also creates 8,000 tons of usable soil and liquid and solid organic fertilizer. At the end of Quantum’s AD process, a percentage of the product is made into biogas and the other percentage is organic fertilizer.

“Our facility was designed, built and operated by Quantum, and it took just three short years to permit,” Paganini quipped. “These projects are difficult. We are at the intersection of solid waste, energy and AD, so we are asking our regulatory bodies to do something very challenging.”

“We are a fully closed loop process, so nothing goes to waste at Quantum,” he added. “We are very particular about that. There is a stigma around waste-to-energy facilities that still create waste. At Quantum, we don’t do that. We use everything.”

And if there are lingering materials that cannot go into the digester—for instance, plastic packaging, aluminum cans, cardboard and plastic bottles—Paganini said Quantum recovers those materials and sends them back to recycling markets to ensure a fully closed loop process. 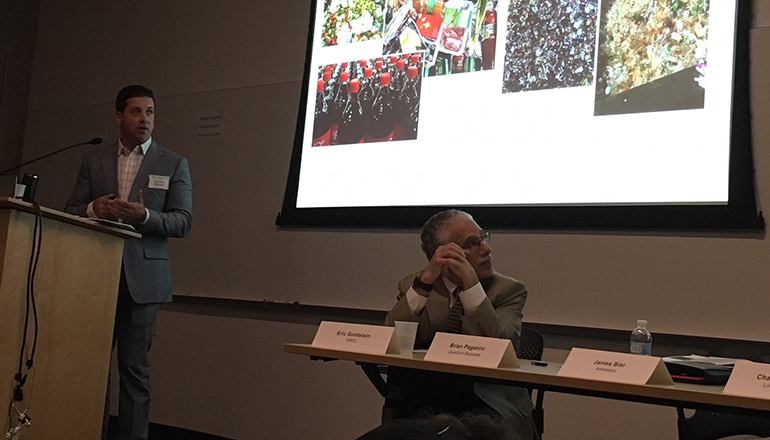 “These are very exciting times for New York State and New York City,” noted Paganini. “There are only a handful of biogas projects out there. We take in post-consumer waste streams, and of course, our customers want to know how they are doing. So, on a monthly basis, we send out metric reports to our customers. It creates a positive reinforcement cycle so that when our partners see that they are doing a good job, it reinforces them to continue doing it.”

When working on new partnerships, Bier warned that these complex projects could take many years to develop through to fruition. For a strong partnership, he advised having a strong track record, diverse experience, a credit line or cash to start the project and access capital to complete the project and local experience. And most importantly, he said, “It has to be an open and collaborative process across all entities.”

The second panel, “Challenges and Opportunities for New York,” featured speakers Pam Elardo, deputy commissioner for the Bureau of Wastewater; Don Chahbazpour, director of gas utility of the future for National Grid; Carlyle Khan, director of solid waste management services for Toronto, Canada; and Justin Wood, director of organizing and strategic research for the New York Lawyers for Public Interest. 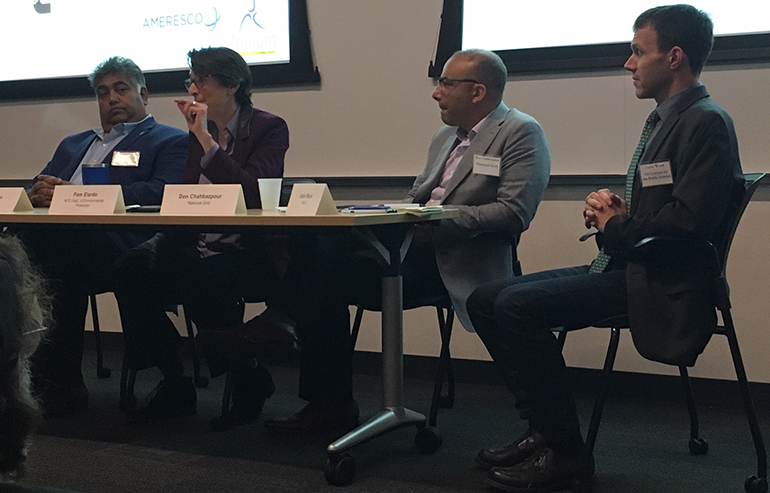 The city is poised to pass a commercial waste zone system that has been touted as a way to reduce garbage truck traffic by designating one private carter to collect commercial waste in each part of the city. Wood explained waste zoning is an opportunity to improve worker safety, create green jobs, reduce air pollution and create public-private partnership opportunities for investment in renewable biogas. He stressed that developing clean biogas power and focusing efforts on food rescue are critical in “addressing our enormous climate impact.”

When it comes to producing and utilizing biogas, Elardo stressed the importance of keeping it local and selling the product locally to create more green fuel for NYC. “We need to be thinking that way, and I think that’s a hurdle within the city itself,” she added.

Chahbazpour agreed, saying it’s a shame that renewable efforts are all going to California. He explained businesses that use RNG in New York today don’t have the incentives they have in California.

“That makes no sense from a policy standpoint,” he said. “If that RNG comes into the system and is sold to California, that, from my perspective, is a crime. The biggest holes to make RNG happen are not on the technology side, they are on the policy side.”

Khan stressed that a change in consumer behavior was key when incorporating renewable energy incentives in Toronto. He said the city moved to bigger toters to collect organic waste for biogas, and Toronto ensured residents truly understood the importance of a circular approach.