Are EV Batteries Creeping Into the Waste & Recycling Streams? 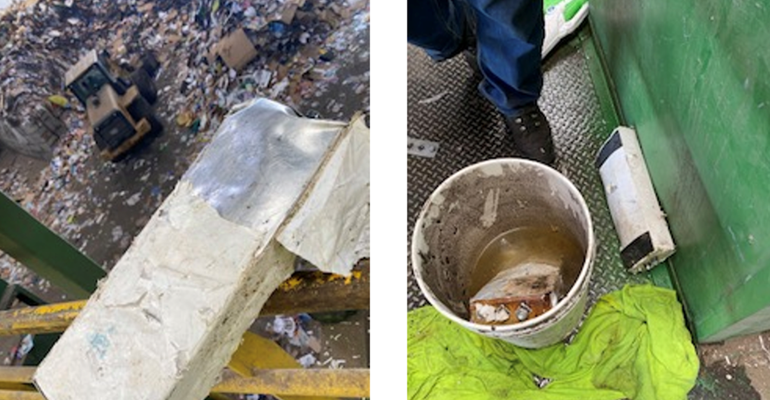 It’s no secret that fleets are going electric. In fact, California’s new rules, which are dubbed the strictest in the nation, will require all new cars, pickups and SUVs to be electric or hydrogen-powered by 2035, and 17 other states are considering similar rules.

It’s no secret that fleets are going electric. In fact, California’s new rules, which are dubbed the strictest in the nation, will require all new cars, pickups and SUVs to be electric or hydrogen-powered by 2035, and 17 other states are considering similar rules.

While these rules aim to reduce emissions, they could result in another problem: more batteries in our waste and recycling streams. How do we plan for the end of life of electric vehicles and their components? These questions and others are ones we should be talking about now, so we can find solutions before these problems get out of hand. 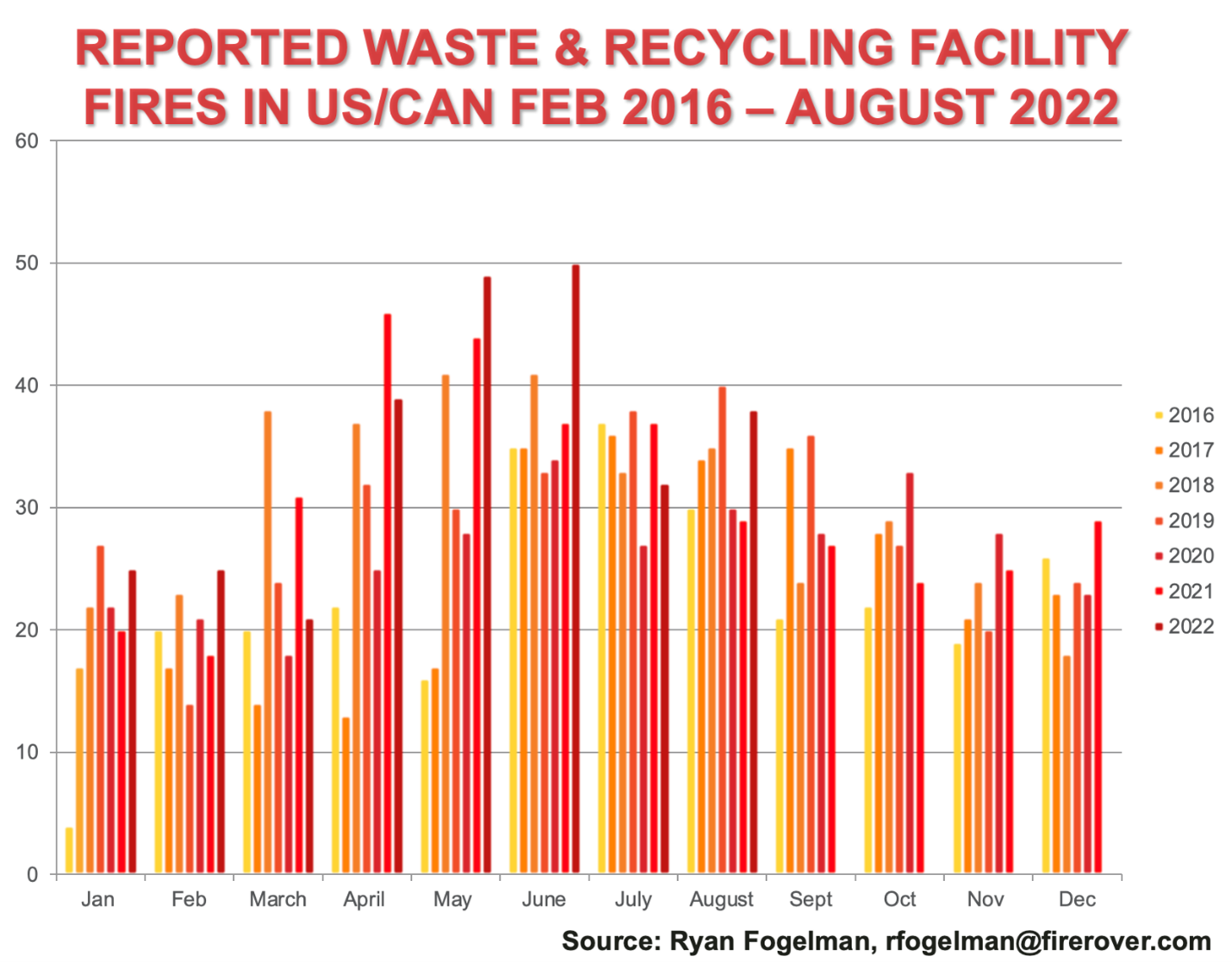 My data only includes the fire incidents that were “reported” by a news outlet, and since I began analyzing this data in 2016, 2022 is turning out to be the worst year for reported fire incidents. Looking at the number of fire incidents using year-to-date (YTD) numbers, 2022’s estimated 418.5 reported incidents are outpacing all prior years, including last year’s spike and 2018’s lithium-ion battery wave. 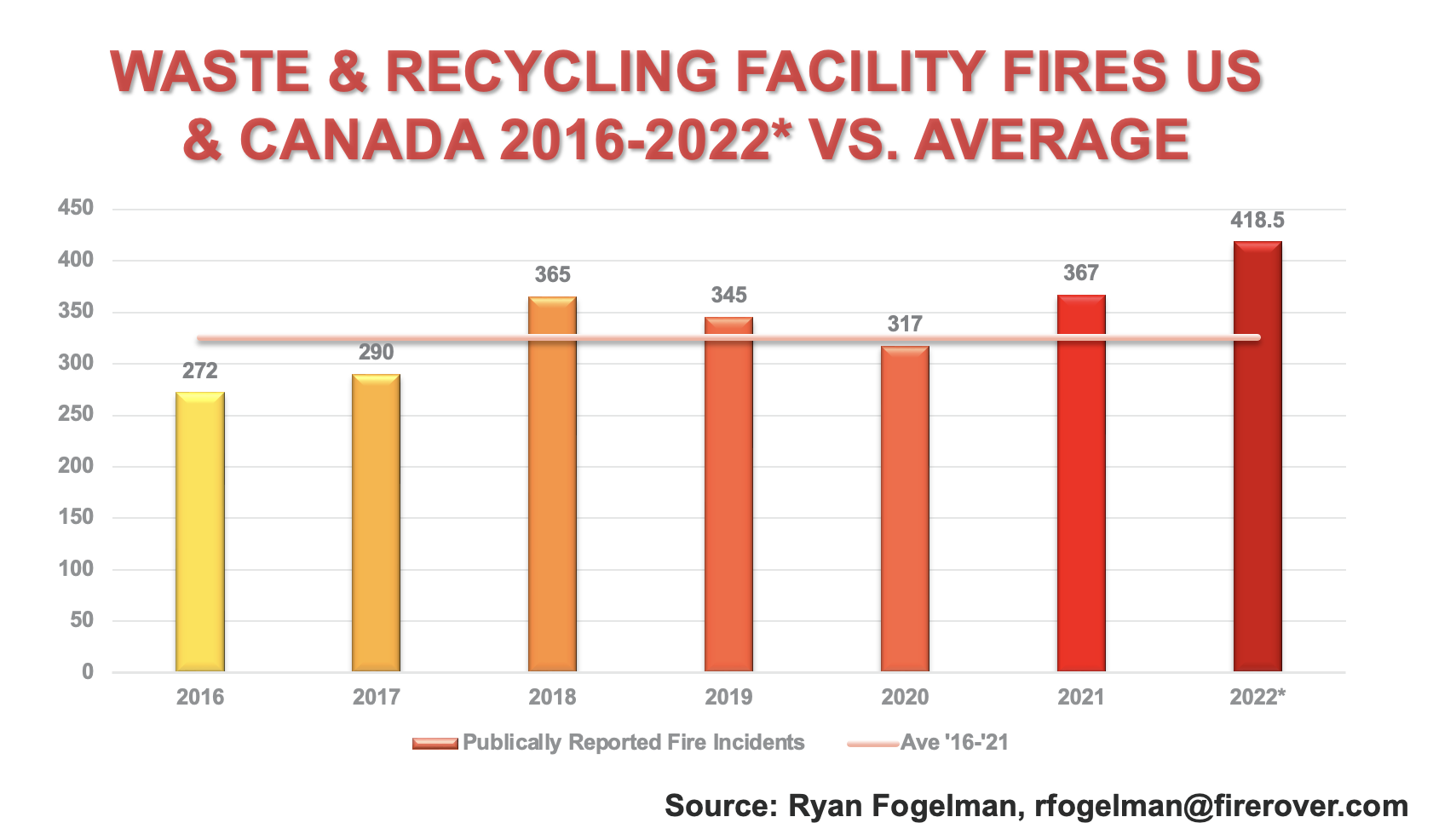 As we head into fall, the YTD forecast becomes more and more solid, which is not a good thing when the numbers are trending where they are. Remember that this year’s numbers are beating out all prior years after we have had over six years to educate consumers on the dangers of batteries in our waste stream, developed operational best practices and added technology like our Fire Rover to protect against these fire hazards.

Based on these facts, the numbers should be going down. Only the perfect storm of battery infiltration and hot and dry temperatures are working against us. 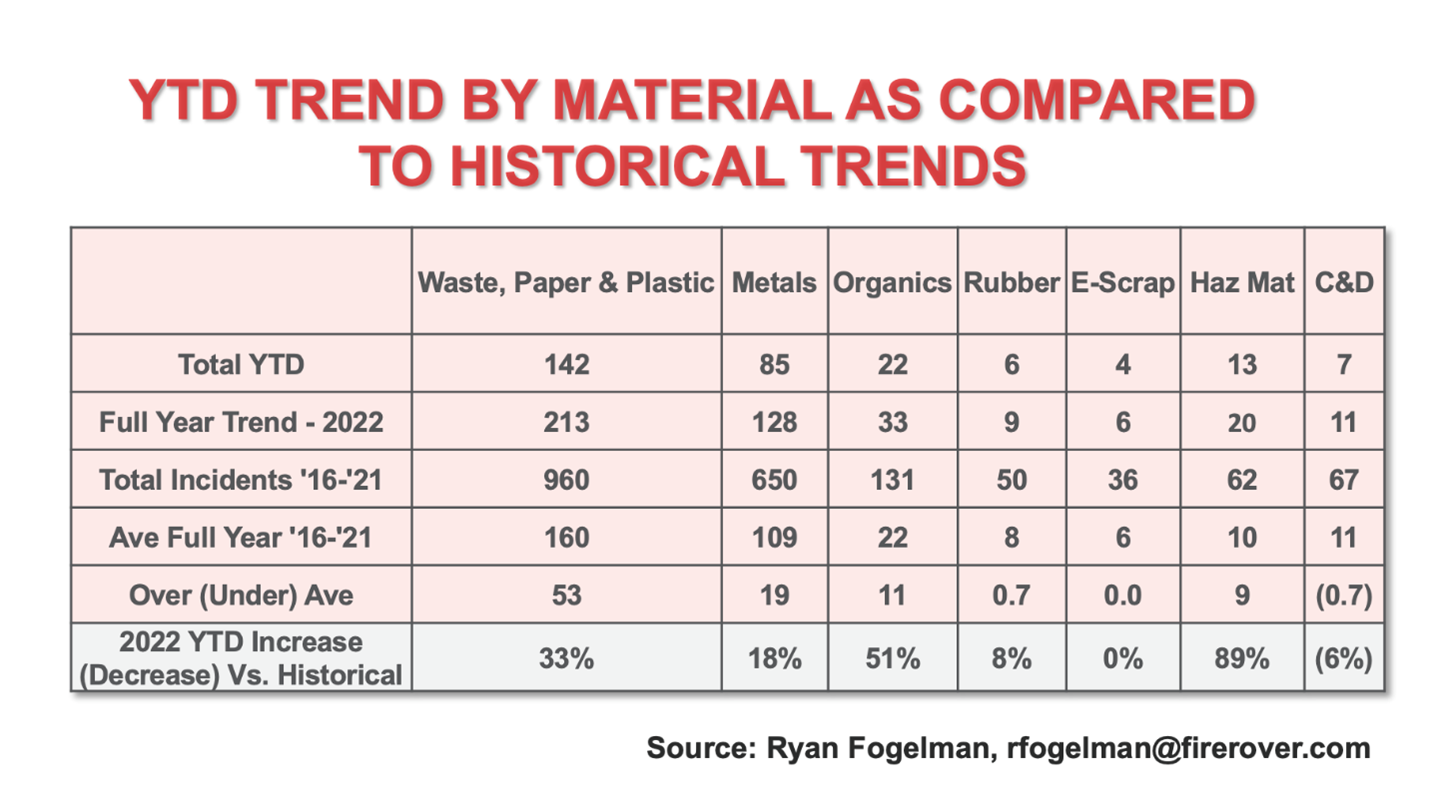 When we look at the trends by material, the results don’t feel much better. Every single material classification is up when compared with the average of the past six years. Only C&D and e-scrap are trending equal or lower this year for fire incidents, while the majority of the material sectors the industry processes are up 8% to 89%.

The Fire Issues Continue to Grow

When I first got into the waste and recycling industry, I started to see a hazard unlike anything we have seen before, and that hazard grew on a global scale in 2018 when the first lithium-ion battery wave started to affect our industry. Hindsight is 20/20, and we only realized there was an issue when we looked back to 2019 and beyond.

With that said, I have been in a much different position since that time. In 2018, I was unsure of what was happening in the industry because most data points outside the reported fire incidents I was tracking were hearsay. By now, I have a solid network of industry colleagues that keep me abreast of the issues they are seeing in their daily operations, which in combination with having a front-row seat to our clients' hazards, provides for a unique perspective that allows me to be the proverbial canary in the coal mines to help the industry address the oncoming hazards before they get out of control.

It is well known that the lead acid battery recycling model is the most successful of any material around the globe. There are various estimates but most authorities report that the rate of lead acid battery recycling at 98% or more. These batteries have been around for decades, and fortunately for us in waste and recycling, most of the batteries are handled by specialized processes from automotive dealers, body shops, auto retailers, scrap metal providers and others. The real issue is when these batteries are not recycled properly and get into our waste and recycling streams. Lead acid batteries, like propane tanks, and large hazards can typically be seen by “spotters” before being added to the hoppers, shredders, etc.

These batteries have been causing problems, albeit in a limited size, for decades.  For example, there was a fire this month in the regional municipality of York, Ontario, Canada, where a lead acid battery was the cause of the fire. In fact, the York Region Government shared this photo on its Twitter page to spread awareness of the danger. 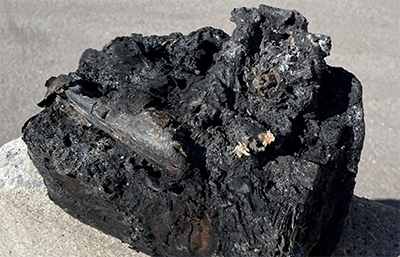 If you have been around long enough, we have all seen these lead-acid batteries getting into our waste and recycling streams.  Keep in mind again that there is a 98% recycling rate for these batteries.

Now let’s look at the EV battery supply chain. When searching for the data, the percentage of recycled EV batteries is unknown. I have seen estimates from 5% to 95%, but the issue for the operators is that it only takes one. These are not small, button-sized batteries. In fact, most can be rather large. In theory, “spotters” could spot some of them on the tip floor, but they need to be educated and trained on what to look for and how to deal with them properly. Unlike the familiar lead acid car battery, these EV batteries can vary by size, shape and color and are continuing to evolve as new technology comes to market. 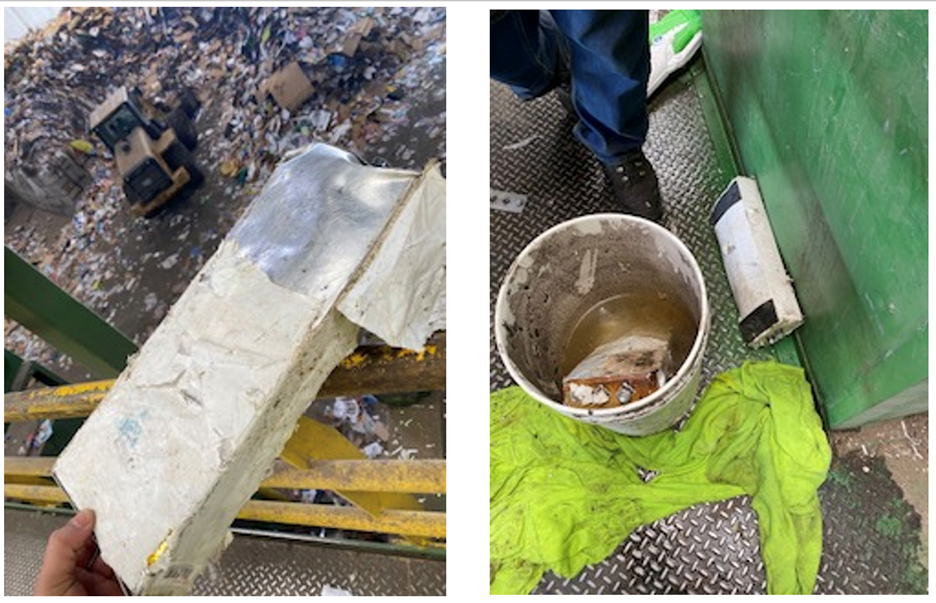 Take a look at the EV battery packs in the pictures above.  They were the cause of two fires at the facility before they realized what was happening.  They could easily be mistaken for something else, including a piece of insulation, a foam insert or even a book. Now imagine one or a series of these packs get stuck in your infeed conveyor, crushed by heavy equipment or unknowingly added to your shredder. They are a fire hazard just waiting to happen.

Where Do We Go from Here?

When you look at the forecasted number of EVs on the market, there are almost 1 million in the U.S. this year alone, according to an article in Bloomberg. The consensus is that these numbers are only a drop in the bucket compared to the number of EVs that are forecasted to come to market in the coming decades. When we compound that with the reality that older model EVs are coming to the end of their lives and EVs are involved in accidents, there is a danger coming that we need to prepare ourselves for.

Solutions must be implemented to deal with the improper EV recycling hazard.  We need to get the interest of our associations, manufacturers and government to help fight this problem by driving awareness of the dangers to the public and the folks causing the issue.   But in the meantime, the waste and recycling operators need to prepare themselves for these risks because the reality is that they could happen at any time and at the end of the day, you are on the front lines.

The fact is that the world is ever-changing. The hazards we dealt with in our waste and recycling operations over the past decade are not necessarily the hazards we will face during the next decade. We need to continue to focus on education, operational best practices and technology to solve the problems that we face. Fortunately, we are not in this by ourselves. These hazards are being felt by our compatriots across the globe, so we need to learn from each other and share best practices to fight these issues on a global scale. With that being said, I will be attending RWM and Letsrecycle Live in Birmingham, UK, September 14-15 in the Blazequel booth (#R-M42) as well as Waste & Recycling Expo Canada in Toronto, September 27-28, in the Fire Rover booth. Please come by and visit with me at either show or reach out to me at my contact information below if you feel you can help.

Ryan Fogelman, JD/MBA, is vice president of strategic partnerships for Fire Rover. He is focused on bringing innovative safety solutions to market, and two of his solutions have won the distinguished Edison Innovation Award for Industrial Safety and Consumer Products. He has been compiling and publishing the “Reported Waste & Recycling Facility Fires In The US/CAN” since February 2016 and the “Waste & Recycling Facility Fires Annual Report.” Fogelman regularly speaks on the topic of the scope of fire problems facing the waste and recycling industries, detection solutions, proper fire planning and early-stage fire risk mitigation.  Additionally, Fogelman is on the National Fire Protection Association’s Technical Committee for Hazard Materials. (Connect with Ryan on LinkedIn at https://www.linkedin.com/in/ryanjayfogelman or email at [email protected])