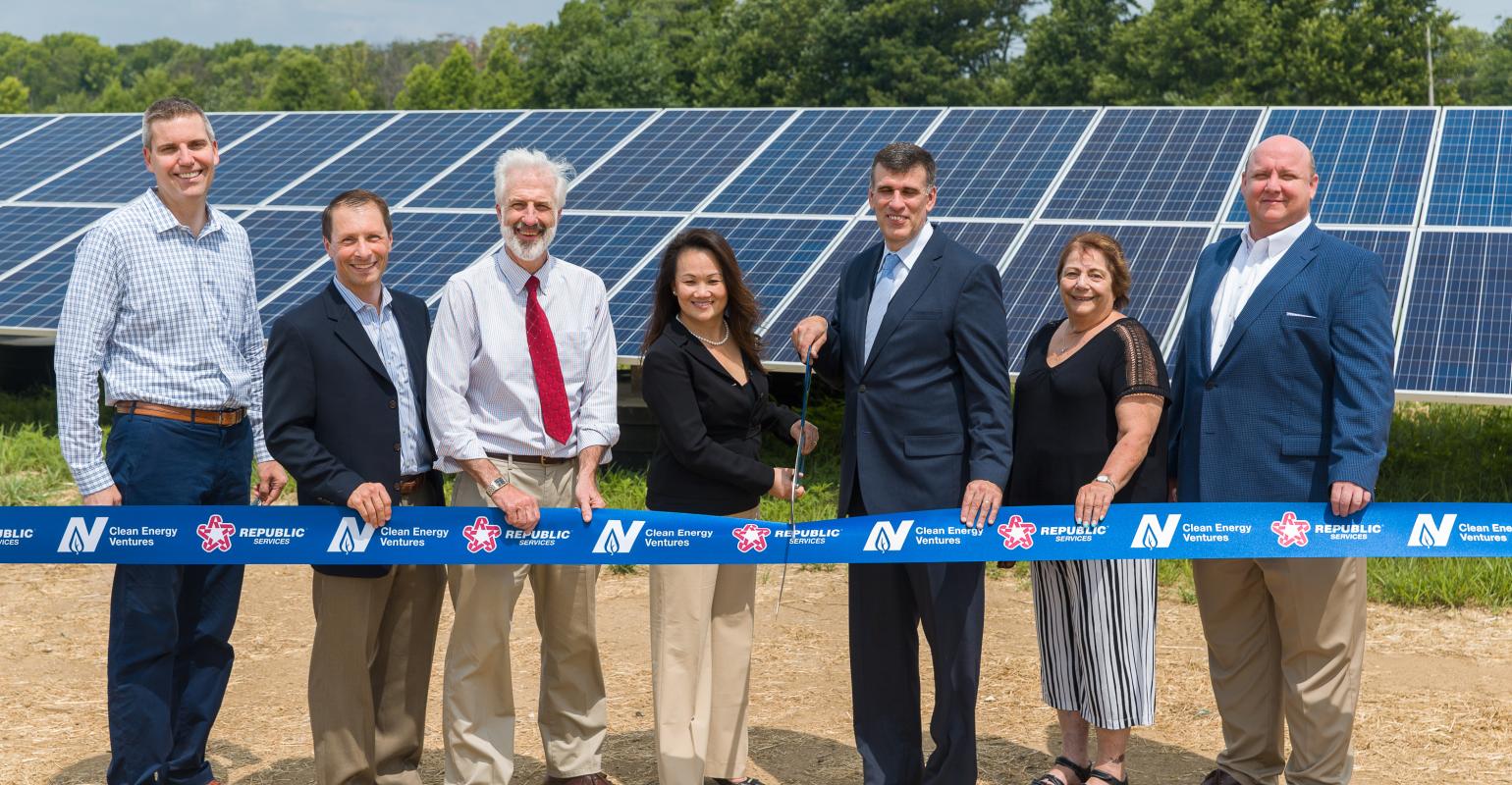 The 40,000 solar panel system is projected to generate enough clean energy to power 1,360 homes annually and reduce emissions by 14,000 tons.

The 40,000 solar panel system on the long-ago remediated, shuttered site will generate enough clean energy to power 1,360 homes annually. And it will reduce emissions by about 14,000 tons, which is equivalent to removing 2,700 cars from the road each year, according to an EPA carbon calculator.

The commercial installation is owned and operated by NJR Clean Energy Ventures (CEV), a subsidiary of New Jersey Resources, which leases the property from Republic and receives revenue from energy sales.

The energy is going into the local distribution system and is sold into the wholesale energy market through the regional grid operator, PJM Interconnection.

“To us, responsible landfill management is more than capturing landfill gas,” says Loan Mansy, area president for East Pennsylvania Republic Services. “It means prioritizing renewable energy opportunities whenever possible, including our solar projects on closed landfills or brownfields and converting previously unused resources into power for local homes and businesses.”

“It takes the right partners to execute a project such as this. NJR and other partners involved in this project were the right fit,” she adds.

The closed New Brunswick landfill was equally fitting, says Mansy, adding, “We have the support of the local and state government, which makes a significant difference.”

New Jersey is one of the fastest-growing markets for solar in the U.S., largely attributed to the state’s strong solar financing model, which relies on Renewable Portfolio Standards (RPS) that establish the percentage of electricity sold that must come from qualified Class I renewable energy sources. In addition, the state set guidelines for solar development that encourage solar projects to be located on landfills and  brownfields, explains New Jersey Resources spokesperson Michael Kinney. NJR CEV will receive renewable energy certificates, which are credits that can be sold to meet utility companies’ renewable energy requirements.

“In May 2018, New Jersey Gov. Phil Murphy signed legislation establishing one of the most ambitious renewable energy standards in the country by requiring 21 percent of the energy sold in the state to be from Class I renewable energy sources by 2020, 35 percent by 2025 and 50 percent by 2030. The legislation also strengthens the state’s solar program to ensure its sustainability over the long term,” says Kinney.

NJR CEV invests in, owns and operates solar and onshore wind projects with a total capacity of nearly 320 MWs. It has a total of 34 commercial solar installations in operation in New Jersey, nearly 10 percent of which are located on landfills. The capped South Brunswick landfill is the third brownfield site that the operation has invested in to create green energy.

As far as Republic’s investment, in 2017, the waste corporation put $29 million into solar projects—both at its closed landfills and other sites. As of today, it has built, invested in or operates more than 236,000 solar panels at 19 solar projects or farms across the country. Combined, these projects have the capacity of 80 MW of renewable power.

“We are proud to join with Republic Services in making solar an important part of New Jersey’s energy future,” said Mark Valori, vice president of NJR CEV, in a statement.

“Projects like this are made possible through a shared commitment to maximize underutilized space to provide clean energy to customers, advance New Jersey’s renewable energy goals and create a cleaner, fairer energy future for us all,” he added.