October Waste and Recycling Facility Fires Back Up to 2017 Levels 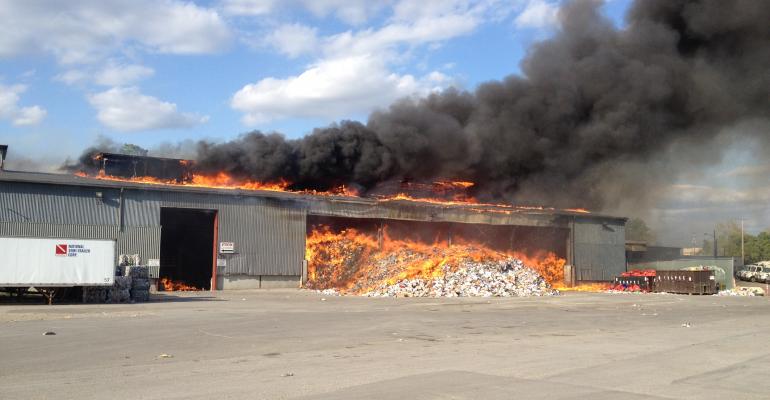 Over the past 12 months, the waste and recycling industry has experienced 369 reported fires in both the U.S. and Canada. Based on reasonable assumptions, we can extrapolate that 1,800-plus facility ﬁres have occurred in the past 12 months, which, based on the number of facilities reported by the Environmental Research & Education Foundation, is more than 40 percent of the industry.

There were also five deaths and 13 injuries reported during that time. Most of these injuries and deaths were suffered by the brave fire professionals called in to fight and contain these incidents. 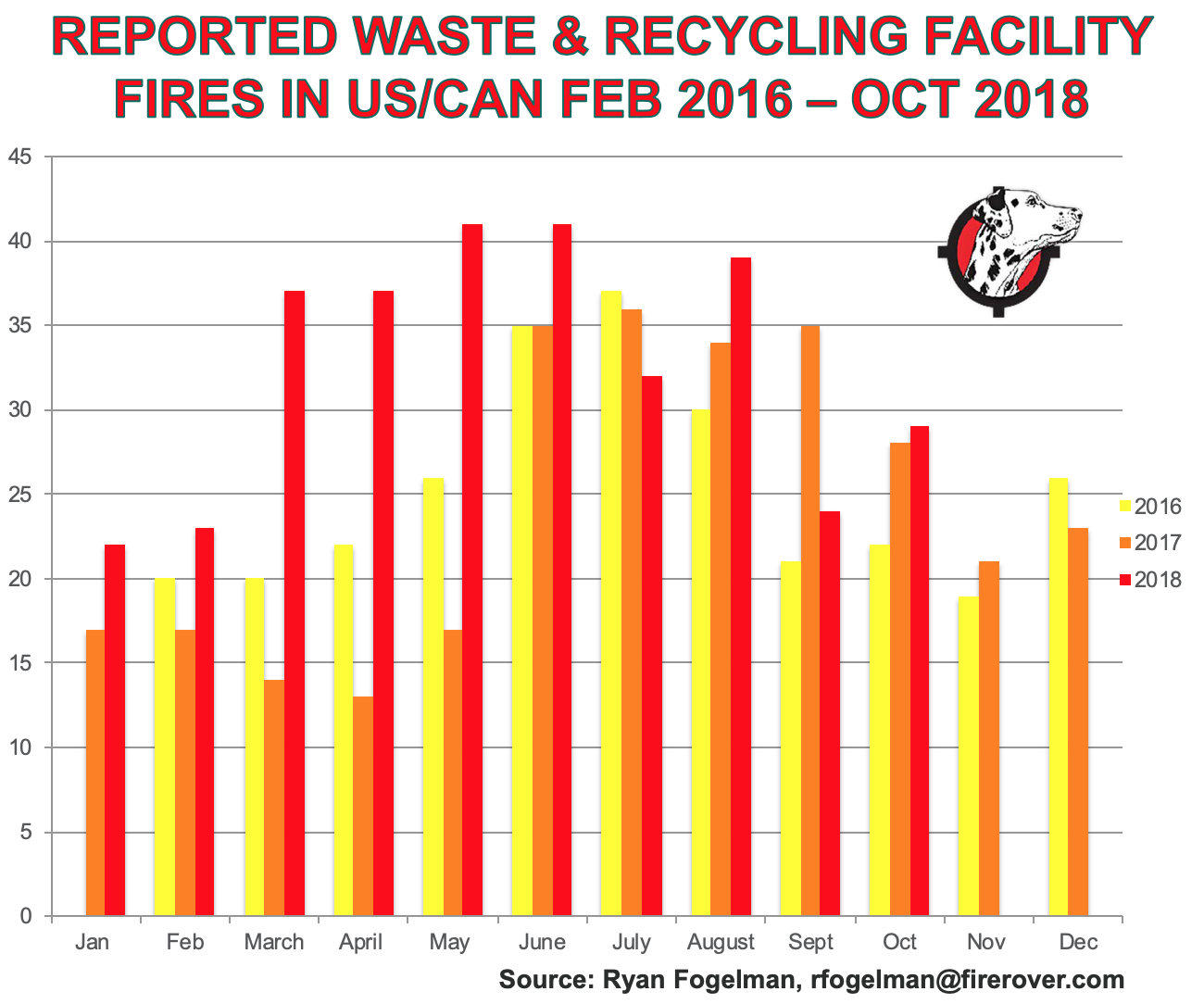 Waste and recycling facility fires have started to level off during the past four months from their sharp increase during the first six months of the year, but total reported fire incidents are still up 32 percent for the year when compared to the same period in 2017. When looking at the rolling 12-month total, we are experiencing a 27 percent increase in reported fires year-over-year.

These fires are not only occurring at our materials recovery facilities and transfer stations but also at our scrap metal, construction and demolition, paper, plastic, chemical and organics recycling operations. They are caused by a list of fire hazards, including, but not limited to, lithium-ion batteries, pressurized tanks/containers, fuels, fertilizers, propone tanks, aerosols and more. Most fires are caught during their very early stages, but as one can imagine, the fires that are being reported by news outlets have typically passed the incipient stages. Most of these incidents incurred significant damage and downtime and are required to be fought by our local firefighting professionals. 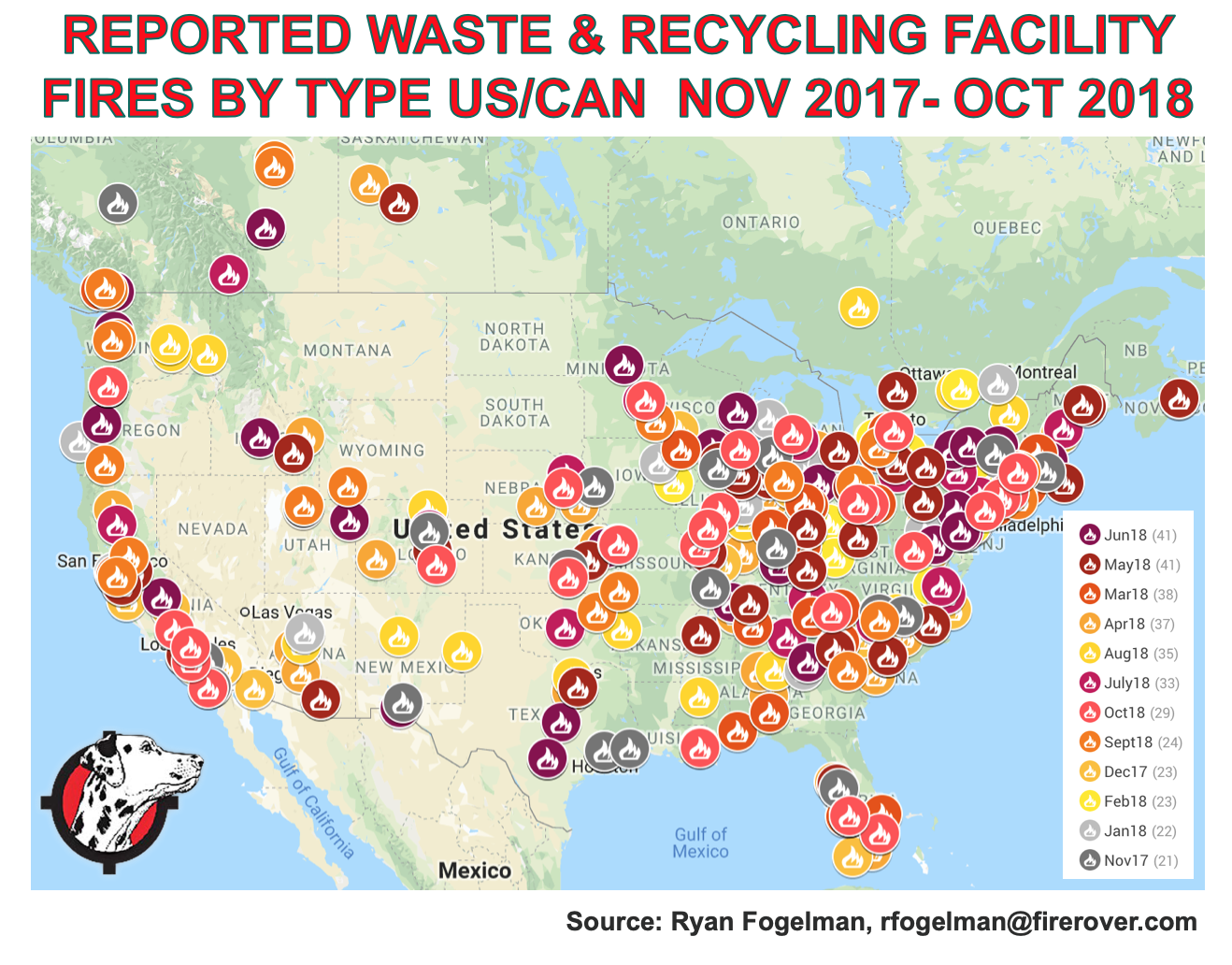 Causes of these fires range from traditional material hazards, such as pressurized tanks, chemicals, hot work activities, hazmat smoking and newer hazards like lithium-ion batteries. No matter the cause or the risk, even the best operators are not able to completely eliminate their risk of fire. It is imperative that they develop and continuously revisit their fire plan. The proper defense consisting of training, operations, equipment and technology can mean the difference between getting a fire incident under control early versus the alternative of a complete shutdown.

I asked Brent Shows, director of recycling for Advanced Disposal, his best advice for protecting his organization’s operations from being victim to fire incidents and he said, “Managing exposure to loss created by thermal events is still relatively new to our industry. Analyzing data and sharing best management practices have been crucial in determining how these events manifest in their earliest stages. Through revised operations plans and implementation of the newest detection and early suppressant technology available to fight on the front lines, I feel we are leading the industry in identifying and acting on these root causes and in turn mitigating our organization’s fire risk.”