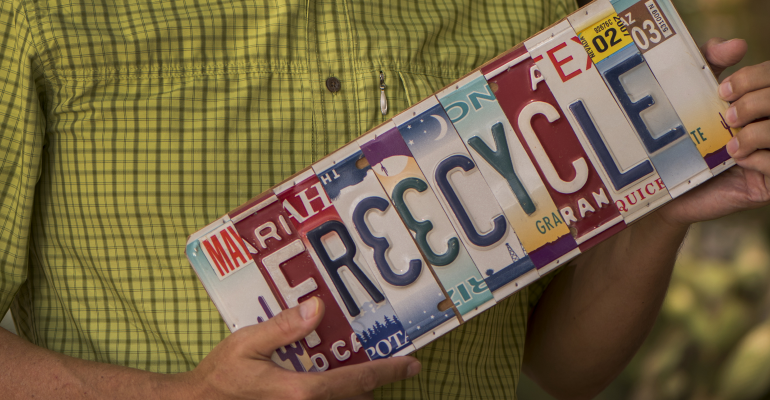 Who would have thought it would be easy to find a home, other than a C&D landfill, for a few hundred pounds of concrete chunks dug out of a beat-up driveway? But a single post on a website launched in Tucson, Ariz. drew plenty of takers: a school making a garden patio; a builder needing foundation material for a straw bale home; and a guy crafting an outdoor bench.

Akin to an online classified ads outlet, that website, Freecycle.org, has exploded in growth since its beginning, when Founder and Executive Director Deron Beal set up a Yahoo group so his friends and a few nonprofits could link to the new site to give and receive all kinds of stuff at no cost.

“When we got our first local press, we flipped from 30 members to over 1,000 overnight. Over the next couple of weeks, we bumped to 5,000 members, then kept growing as papers elsewhere picked up on what we were doing, and people asked if they could set up groups in their communities,” recalls Beal.

What’s known as The Freecycle Network kept snowballing as it made national headlines, and today about 9.5 million members worldwide belong to one of over 5,000 local groups. Collectively they post thousands of items daily, diverting from landfill over 1,000 tons a day of materials that are put to use.

Beal surmises the beauty is that while the internet has served well to get the message out, the all-volunteer teams (minus two paid staff and an occasional freelancer) do not rely on technology to make it happen.

“Each group is local, very community spirited, and community driven. People give freely with no strings attached. That’s what works. I think if we went with a larger outlet like Craigslist, it would lose some of that spirit,” he says of the nonprofit operation that runs on a $275,000-a-year budget. Funding comes from individual donors, grants, and sponsorships.

Individual town moderators make sure the rules are followed; they’re simple and few: trade must be free, legal, and appropriate for all ages. Playboy magazines or weapons would not be appropriate.

Moderators can remove posts or contact individual members if they cross boundaries. There’s also keyword monitoring, so if there were an iPad scam for instance, suspect items can be identified and intercepted.

“But if you develop a good community, you have no problems. People just want to be help each other. You’re glad when it leaves your front door and as glad that you make someone else happy,” Beal says. 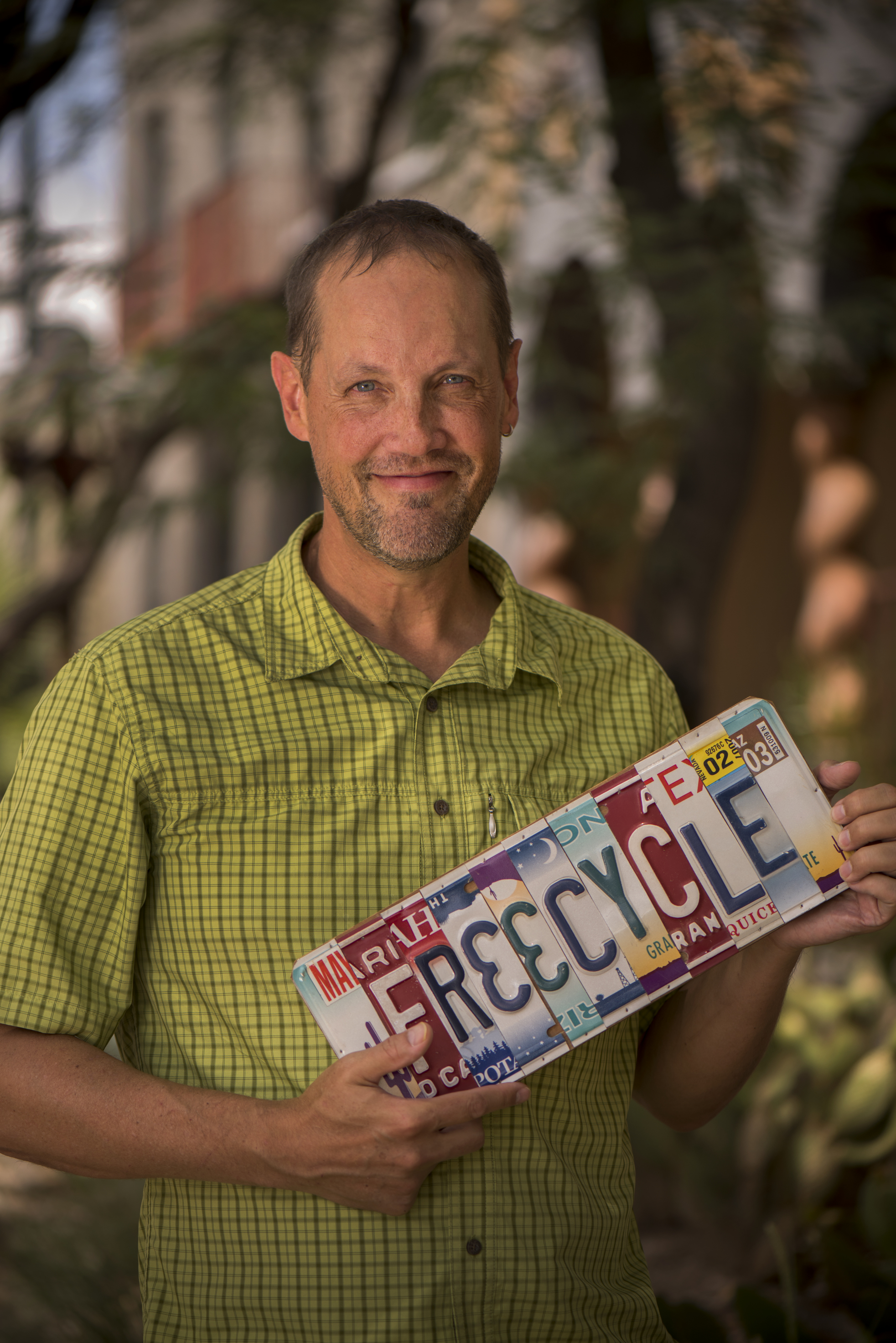 While The Freecycle Network may be the largest and among only a few of its kind, there are similar operations out there called give-away shops, free shops, and swap shops where all goods are free. There’s Ziilch in Australia. And there’s the Buy Nothing Project, which started on the West Coast with a few dozen members and fast grew to four million. Like Freecycle, they say the power in models to fuel what’s called a gift economy is the people, the web of connections, and the ability to reduce waste and rethink consumption.

Some people refer to such operations as cyber curbside, except members don’t have to worry about what neighbors think says Beal, because they don’t literally leave their old belongings at the curb—at least not Freecycle members. It’s up to donors and recipients to make arrangements, but people typically place what they gift on their porch, or recipients knock on their doors.

“Sometimes we collaborate with landfills so people can drop off or pick up something just past the weigh station, and we call these ‘free stations.’

We can also announce landfills’ events, like collection of electronics or car batteries. We just want to help recycle and reuse, and we definitely have an audience with these same interests,” says Beal, who formerly worked with a small nonprofit that was a liaison to Tucson, picking up recycling for businesses with no room for roll offs or recycling containers. He ended up hauling plenty that the city wouldn’t take, old electronics, bulky furniture, and found people who wanted them. It was that job that inspired him to set up the first Freecycle group. It was a way to reach more takers.

Alison Kamat wears a couple of volunteer hats. She oversees the activities of the regional moderators who oversee smaller groups of town moderators. So, she works with people all over the country and sometimes world, helping to keep Freecycle running smoothly behind the scenes.

She also moderates her town’s 6,000-member group in northern Virginia, approving acceptable posts, trying to increase membership, and ironing out the occasional misunderstanding.

“Being a moderator of a local group gives me a feel for what Freecycle is and its values. And I try to carry those values forward in my relationships with coordinators in my higher-level role,” Kamat says.

Sometimes it’s more than individuals that get involved. Nonprofits have turned to Freecycle asking for help from the community.  But it doesn’t even have to stop there. Even a small number of companies use it to be able to give away would-be throwaways to help make their sustainability goals.

The way Beal sees it, the gifting economy concept fills in where thrift stores experience gaps. Volumes of donations to these outlets are thrown out because they have no monetary value. But with giveaways people can post even broken items that someone may want to fix. It can still have worth even if a monetary price tag can’t be put on it.

Further he points out, the concept (not unlike recycling) helps reduce industrial trash. The largest part of the waste stream, it has a myriad of environmental consequences. Manufacturing of one sofa for instance requires emissions-emitting diesel for transportation; herbicides to grow cotton or other organic materials; the wood for the legs; and materials for packaging.

“So, if you regift you are not just keeping a 100-pound couch off of landfill. There’s a huge environmental impact,” Beal says.

The team launched a new functionality on the website earlier this year. Called Friends Circles, it enables local groups to post belongings for sharing and lending. It’s people who already know each other through the Freecycle Network who share bike parts, books, and tools among items that someone can temporarily free up for someone else who needs it.

Caroline Rothaug, who supports groups of volunteers and is a town moderator, was among volunteers who worked on implementation of this latest feature.

“Freecycle's model of giving stuff away is rooted in our mission of sustainability and keeping items out of landfills, so lending and borrowing fits in nicely with the concept of reducing what people buy and encouraging reuse instead of buying new,” she says.

As it grows, Freecycle stays with the same fundamental goals as when it began. Beal sizes up what the concept is about by recalling the first time he replied to an offer. It was for a George Foreman grill.

“It turned out the person lives two blocks away from me. I got to meet a neighbor. I got a free grill, and I also got eggs to cook on it because they had chickens. So, it’s keeping it out of landfill. It’s building a community. And it’s helping each other out.”