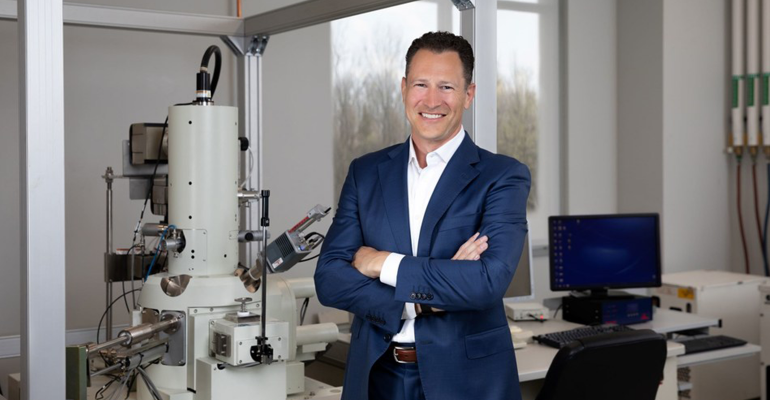 With the proliferation of lithium-ion-powered electronics and vehicles over the past decade, the race to address the environmental and regulatory challenges of spent batteries continues to accelerate.

Current estimates show only 5% of lithium-ion batteries are recycled at the end of their useful lives, and the risky disposal process is left to waste haulers and recyclers without the means to safely handle them. Many lithium-ion batteries simply end up in the trash bin, which leads to fires and explosions at material recovery facilities (MRFs).

Worcester, Mass.-based Battery Resourcers announced the mid-April completion of a Series B equity round with $20 million in financing. Investors in the company's mixed-stream recycling technology include At One Ventures, TDK Ventures, TRUMPF Venture, Doral Energy-Tech Ventures and Jaguar Land Rover's InMotion Ventures.

"Having a technological difference is what Battery Resourcers is all about and what our investors have invested in," says CEO Mike O'Kronley. "Our technology, our intellectual property is really the key differentiator for us."

This round of financing will aid in the development of a commercial-scale processing facility with a capacity to process 10,000 tons of batteries annually, which equates to approximately 20,000 electric vehicles (EVs) a year. Battery Resourcers boasts a 97% metal-recovery process with the ability to produce Nickel Manganese Cobalt (NMC)-based cathode active materials with a 35% reduction in cost, 32% reduction in emissions, and 13% reduction in energy consumption compared to the production of virgin cathode, according to the company.

A "novel" process is also in the works for graphite recovery and purification, which will add the capability to provide both cathode and anode active materials to manufacturers of new batteries.

O'Kronley spoke with Waste360 about the company, its mixed-stream process and what the future might look like for lithium-ion battery recycling.

Waste360: Please tell me about your background and how you became involved in the li-ion battery recycling industry.

O'Kronley: I’m a long-time participant in the automotive industry, originally from the Detroit area. I was previously with a battery manufacturer, A123 Systems. I was with them for around 10 years. In my last role there, I was the head of corporate strategy, and we made various investments in technology companies, and one of them was a company called Battery Resourcers. That's how I was first introduced to the company, and A123 led the series A investment into Battery Resourcers.

A123 and Battery Resourcers were doing some joint development work and A123 took the cathode active material that Battery Resourcers had made with its patented process and tested them against commercially-available cathode material. It was sort of an A to B comparison. The performance of the cathode active material that Battery Resourcers made performed very, very positively compared to the commercially available material. In other words, it performed much better than the commercially available material that A123 was using at the time. So that's what led A123 to invest in Battery Resourcers. I was leading that investment, and as a result, I got involved with the company. Eventually I was asked to sit on the Board of Directors. I’ve been doing that since 2017. Fast-forward a couple of years later, the company was growing and the board approached me to join the company full time, not just as a board member, but also as a member of the management team.

Waste360: Your company has mentioned support from the US Advanced Battery Consortium. What does that entail?

O'Kronley: There are three levels of that particular program. The first program was part of the WPI (Worcester Polytechnic Institute). That's where the technology was created and Battery Resourcers was born out of that university. The US ABC program was a three-way collaboration between WPI, Battery Resourcers and A123 and it was to take all different types of lithium ion batteries – whether it's consumer electronics or EVs, it really didn't matter – different chemistries, and it was to prove that you can take a mixed stream of batteries into this process, process it and make cathode active material. At the first stage of the program, it was to make NMC 111, and we did that back in 2016-2017. And so that program was very successful, that's what led A123 to invest initially into Battery Resourcers was that USABC Program and that joint development work. It was so successful, there was a follow-on program, a phase 2, to make NMC-622 material. That program is also very successful and had recently completed. And there's a follow-on program, a third phase now, to make even a higher nickel content cathode material that has just been kicked off. So there's been a series of awards and programs over the years with USABC.

Waste360: Can you tell me more about the mixed-stream approach?

O'Kronley: All lithium-ion batteries are not the same. They come in different form factors. Some are cylindrical. Some are pouch. Some are prismatic. Then they're assembled in different modules and/or even larger packs. So, they're all different shapes and sizes and, in addition to that, there's different chemistries. It's a bit of an alphabet soup - you may know there's an LFP and NMC and LCO, a LCA. There's lots of different types of chemistries. The Battery Resourcers process can [take] any of these different types of lithium-ion battery chemistries, bring them into our processes as feedstock, and we can make a very defined output. What that means is that we can take in a cathode that was popular, let's say eight to 10 years ago, such as an NMC111 or an LMO. We can bring that into our process and we can mix in even a few consumer electronics batteries which are LCO, that's a mixed stream, and they can be all different shapes and sizes and form factors they could go into the process, and we can make a very defined cathode output in NMC-622, and so the output doesn't necessarily need to look like the input. Through our process, we recover the metals and make brand new cathode active material.

Waste360: Can you tell me what does this round of funding means for the company and how it going to help to scale with your mixed-stream approach?

O'Kronley: This round of funding is going to do two things for us. Number one: it's going to increase our capacity and capability of making cathode material through the expansion of capacity and capability of our demonstration facilities. Number two: it's going to bring us to commercial scale of processing spent batteries and generating black mass, lithium carbonate and metal sulfates There will be a second phase of investment that will be coming later to get us to a commercial scale on the cathode materials.

Waste360: What does the collection process looks like currently, and how do you see growing in the future for collecting spent batteries?

Waste360:  Is there any legislation out there moving the recycling process forward for batteries? We've seen a lot of recycling legislation come out in the last few weeks, is there anything in particular that you see helping the industry in general?

O'Kronley: There are  initiatives that are coming out now about critical material supply and recovering battery materials and introducing them back into the domestic battery supply chain. That's what's happening here in North America. Similarly, there's new initiatives that have been passed in the EU that are also very, very helpful to a business like Battery Resourcers. The legislation that has come out is actually mandating recycled content in new batteries. They're actually mandating recycling of batteries that are over a certain size, so that's now going to be required, and they're also placing carbon declarations and caps on all new batteries that are being produced and put into the market.  We put our output product and our active materials go right back into new batteries, which is helped by legislation as well. And we help companies satisfy those recycled content mandates. But also, our process has an 87% lower carbon emission than making cathode from traditional sources, which are mining. None of our materials are required in any mined materials, and so as a result, our carbon emissions and the way that we make cathode material has an 87% lower carbon emissions than traditional methods. That goes a long way to being able to list lower carbon declarations on new batteries.

All of that combined is getting a lot of attention from really anybody that puts batteries out into the market, and so that's a concern for any vehicle OEM and any grid operator or any consumer electronics manufacturer that has batteries in their products. That's something that has passed in Europe. It's not passed here in North America yet, but there is some discussion whether or not to adopt portions of that.

Waste360: What does the future look like for Battery Resourcers? Where do you see the company the next three to five years?

O'Kronley: We're going to be growing initially in North America. This round of funding will be bringing us to commercial scale in North America, but very quickly and with some of our investors and partnerships that we're developing. We're going to be going to Europe as well. It's a growing and expanding market. We are going to grow and expand along with that market, and in the 3- to 5-year time frame, we will be one of the market leaders in the recycling space, primarily because we are unique and different from other recyclers. We are able to extract more value out of the feedstock, and so this is an important differentiator. A lot of recyclers today are using inefficient methods. They're either smelting their batteries or maybe they're just recovering some of the basic metals, and they sell off those metals to the commodities markets. They're only able to get so much value for that if they're recovering a nickel cobalt alloy or they're getting a lithium carbonate out of it. Those are commodities metals. That's not what we focus on. That's not what Battery Resourcers sells. We sell the active material back into new batteries and it goes directly back to battery manufacturers. So, it's a highly engineered product, and it sells for a lot more than the commodities metals.

What's going to happen is that as the industry is growing and as different companies grow, the key differentiator is going to be the technology, the intellectual property that Battery Resourcers has. The technology that came from Worcester Polytechnic Institute (WPI) is what is going to allow us to essentially be much more competitive for the batteries and the feedstock that's going to be available. And so the company and the process that has the greatest technological advantage will be ultimately the winner, and so I think in three to five years you're going to see that shaking out in the market. The companies that are using less valuable practices or less economically viable practices are going to start to fall away.