The M&A Landscape: The More Things Change, the More They Stay the Same

In this month’s edition of Business Insights, we review some of the drivers and current valuation parameters of M&A activity and compare them to the past.

Given heightened merger and acquisition (M&A) activity over the past year and widespread expectations for more of the same in the coming year, in this issue of Business Insights, we review some of the drivers and current valuation parameters, as well as take a trip down memory lane and compare them to past M&A activity.

Although 2018 contained only one “mega deal” (GFL Environmental/Waste Industries), M&A activity among all the publicly-traded companies was elevated, with all the solid waste players expected to meet, or in almost all cases exceed, tuck-in acquisition goals laid out in February guidance. The tax law change was a major driver, as it enabled lower hurdle rates for acceptable returns on deals for buyers, while the publicly-traded solid waste companies also enjoyed higher multiple valuations than in the past—companies’ stocks are trading at an average 10 to 11 times EBITDA versus more typical ranges of 8 to 9 times EBITDA that characterized much of the last decade. Thus, they can afford to pay more.

From the sellers’ point of view, a rising economic tide has lifted all boats, strengthening private company businesses and thus their value, while cash returns (i.e. interest rates) available on the proceeds have improved. Looking out to the remainder of 2019, these trends seem unlikely to reverse short term, and coupled with a sense that “this may be as good as it gets,” indicates another strong year for M&A activity. This may be heightened as we approach the next election, if fear of a reversal of tax reform rises or economic activity slows.

Courtesy of our industry expert colleagues, Dan Butturini and Richard Sterner of Sterner Consulting, who have been involved in the solid waste industry for more than two decades, Table 1 (below; Sterner Consulting presentation—Valuation Template) lays out typical valuation parameters for private companies of various sizes and business lines. Obviously, a number of factors, such as competitive/geographic positioning, state of equipment, permanent versus temporary business, permit capacity and recycled commodity risk, just to name a few, can affect and cause some variability in these estimated valuation ranges. Additionally, the prevalence of private equity investors, who have long been part of the M&A landscape in the solid waste industry, can also skew these valuations higher than what a strategic buyer would pay.

In Table 2 (below), we have presented a select number of relatively recent transaction multiples in the industry, with most of the deals falling into the more “garden-variety,” larger tuck-ins that have been announced by strategic buyers. By and large, they fall into the Sterner Consulting valuation grid, as vertically integrated operations will tend to fall on the upper end of the landfill valuation range. The outlier is certainly the GFL Environmental/Waste Industries merger, the valuation of which has not been publicly disclosed by the parties but has been variously put in a broad 12.5 to 14 times EBITDA valuation range by several analyst reports and numerous industry sources. We would not view the GFL Environmental/Waste Industries transaction multiple as the new normal, however. By all reports, GFL Environmental was looking for a significant platform to enter the U.S. market, and Waste Industries’ size, stability, reputation as a very well-run company and its good cash flow all made it a rather unique opportunity for GFL. And, if seller expectations do rise to those more lofty multiples, the strategic players will likely pass and buy their own stock instead!

With that said about the GFL Environmental/Waste Industries’ transaction multiple being an outlier, it seems apparent that purchase multiples have risen over the past several years, and certainly as compared to prior M&A peak periods in the industry, though the average increase still looks relatively modest. When comparing the current Sterner Consulting valuation table (again pictured in Table 1) to a similar presentation by the consultants roughly a decade ago, it generally indicates multiple expansion of half of a turn to a full turn. For example, Sterner Consulting put a typical large hauling company (now characterized as more than $15 million in annual revenues versus more than $7 million 10 years ago) valuation at 4 to 7 times EBITDA currently, versus 4.5 to 6 times 10 years ago. A medium-sized hauler, typically valued at up to 6 times now, as per Table 1, was more typically valued at 5.5 times a decade ago. Waste Connections’ CEO Ron Mittelstaedt has noted on a number of conference calls and investor presentations of late that he believes multiples are up 1 to 1.5 turns over the past few years, which he attributes to tax reform and partly to improved quality of assets—many sellers took advantage of bonus depreciation and the good economy to upgrade their equipment.

Historical Transaction Multiples Bear This Out

We took a trip down memory lane and pulled deal information and historical transaction multiples out of our archives. The bulk of those fell into what we would roughly characterize as two prior high M&A periods or cycles as presented in Table 3 (below). Even though a number of the transactions were far larger than what we presented in Table 2, the bulk of the strategic transactions were in the 7 to 8 times EBITDA range, while the five private equity transactions were done at somewhat higher valuations, though we would note they were also generally completed at a later time period than the frenetic climax of M&A and industry consolidation that characterized the mid-to-late 1990s. 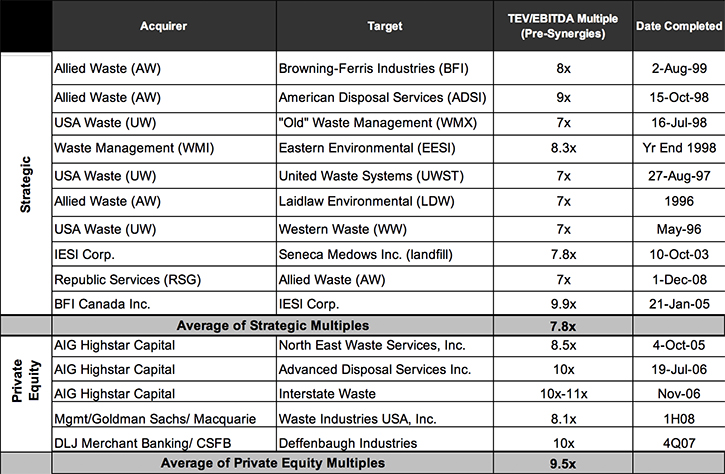 A Positive For 2019 Results

All this bodes well for incremental revenues and earnings from acquisition activity for the publicly-traded solid waste companies. Generally, company managements do not “bake in” unannounced or future acquisitions into their financial guidance. Thus, all things being equal, 2019 projections are likely to have some bias to the upside, or at a minimum, deal activity could provide some offset in the event the economy slows.