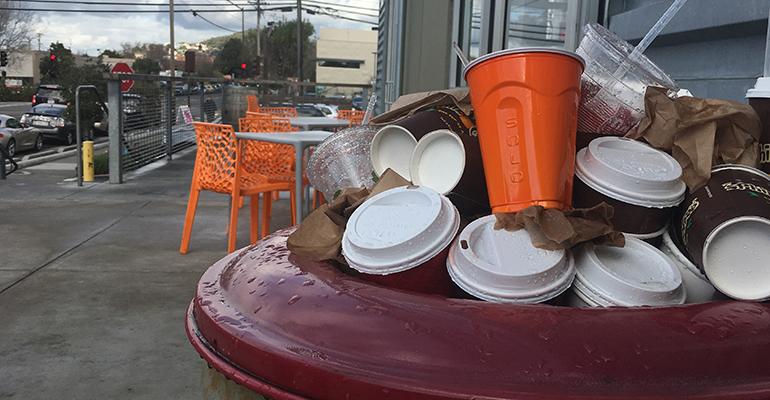 The ordinance, which will be phased in over time, requires food businesses to transition from plastic ware to compostable and/or reusable products.

Americans use about 20 billion paper cups a year, generating 2.2 billion pounds of waste. Add to that figure 500 million plastic straws that get used and tossed every day, which translates to another 342 million pounds of trash a year, reports ReThink Disposable.

Much of these materials end up in oceans and on streets, and even when they are captured, they have little to no viable markets after their short life, leaving communities with a hefty waste management tab. This trash problem, with its economic and environmental impacts, is why Berkeley, Calif., has passed an ordinance requiring food businesses to transition from plastic foodware to compostable and/or reusable products.

Developed with the Ecology Center, ReThink Disposable and other environmental organizations and authored by Councilwoman Sophie Hahn, the ordinance will be phased in over time. It comes with several provisions that will apply wherever prepared food is sold.

Already in effect, food vendors can only give out disposable utensils upon request or at self-serve stations. And they are required to provide compost and recycling bins if their customers self-bus.

Beginning in January 2020, restaurants and other food vendors will be required to use compostable foodware certified by the Biodegradable Products Institute for to-go orders. Customers can bring their own cups or pay 25 cents for the disposable, compostable cups.

By July 2020, all businesses will be required to use durable, reusable plates, cups and utensils for dine-in meals. Though there will be some allowable compostable and recyclable products such as straws, foil wrappers, tray liners and napkins. 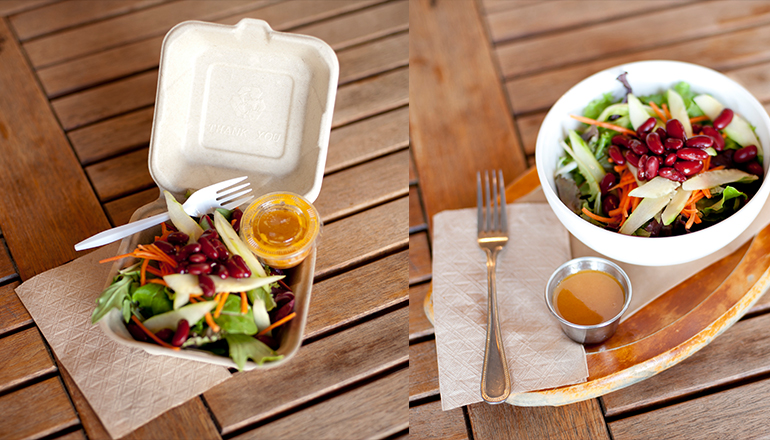 Hahn and her staff spent months talking to food business owners and observing the flow of their kitchens to better understand their operations and hear their concerns. The final ordinance was developed incorporating changes with feedback from these businesses and from the general public.

One of the biggest tweaks was to remove a proposed provision to allow customers to bring their own food containers. A lot of small shops said they had limited counter space, which would be problematic if people brought in large containers, and then there was concern they would potentially be introducing unsanitary items into the kitchen.

Most businesses surveyed identified problems with these products, like cost for disposal and for the products themselves.

“Even a homeless man spoke in favor. He said he carries his own cup all the time, and since he lives on the streets, he would appreciate less litter,” says Hahn.

Some of the community saw the 25-cent charge as a tax and objected.

“This suggests revenue goes to the city, which it doesn’t [fees are retained by food businesses]. And some people thought we are imposing a surcharge, and it is not that either. The charge is just intended as an incentive to discourage use of disposable, single-use items,” says Hahn.

She anticipates there could be unforeseen challenges when the main components are implemented. But she says the city will work with restaurants and food vendors to find solutions.

Berkeley is allocating funding for mini-grants to help food businesses with one-time costs as well as offering technical assistance to help with the transition to reusable foodware. And the city is discussing cost sharing and provision of technical assistance with community partners.

Ecology Center, an environmental justice organization that does curbside recycling for Berkeley, worked on the legislation, alongside the city council, mayor and other community members.

Ecology Center had been involved in the plastic bag reduction ordinance in Alameda County and then in the effort to create a statewide ban on plastic bags and place a fee on paper bags.

“The idea [with the plastic bag ban] was to reduce disposables—not just switch to paper. We took a similar approach in exploring how to manage foodware, realizing we could not recycle our way out of this problem. Rather we need to actually eliminate waste in the first place,” says Martin Bourque, executive director of Ecology Center.

What most surprised Bourque is how quickly the city, the public and food businesses accepted fully eliminating waste rather than suggesting to simply recycling more.

“Everyone we talked to thought there was a problem that needs solving. They understood it’s not just about moving materials from waste bins to recycling or compost bins,” he says.

Obermeit went on to say that in current market conditions, in particular, many single-use plastics are “effectively unrecyclable. And disposable foodware is a major contributor to litter that is costly for both the city and our business districts … By reducing waste upstream, we believe this ordinance will result in cleaner streets and waterways and will move Berkeley closer to achieving our city’s goal of zero waste.”