It all started with a solid waste handler’s need for an innovative odor control solution. Now one company is pioneering ways to use atomized mist technology to curb odor problems at landfills.

Dust Control Technology (DCT) of Peoria, Ill., started more than a decade ago with its DustBoss line of dust-suppression equipment. In recent years, the company began receiving inquiries from customers about applying its atomized mist technology to odor suppression.

It turns out, DCT was about to come up with a solution. The hurdle was engineering the equipment to create droplets small enough to control odor through air treatment deodorizers while also giving customers an option specifically designed for ground odor management.

The result was a pair of customized OdorBoss designs that DCT Account Manager Mike Lewis says use an atomized mist to deodorize rather than neutralize odor problems. Neutralizers “trick” the nose into not detecting odors, while deodorizers react with odor vapor in the air, Lewis says. Compared to masking agents or neutralizers, deodorizers are generally considered a more desirable solution for outdoor applications, because they change the chemistry of the molecules, effectively reshaping the odorous elements into something else.

Atomized mist is effective in odor suppression because airborne water droplets and odor vapor are more likely to collide when they are around the same size, giving the deodorizer an opportunity to mix with the odor-causing substance. In contrast to common wet methods of odor control such as sprinklers and hoses, atomized mist technology delivers greater efficacy and uses less water, according to the company. 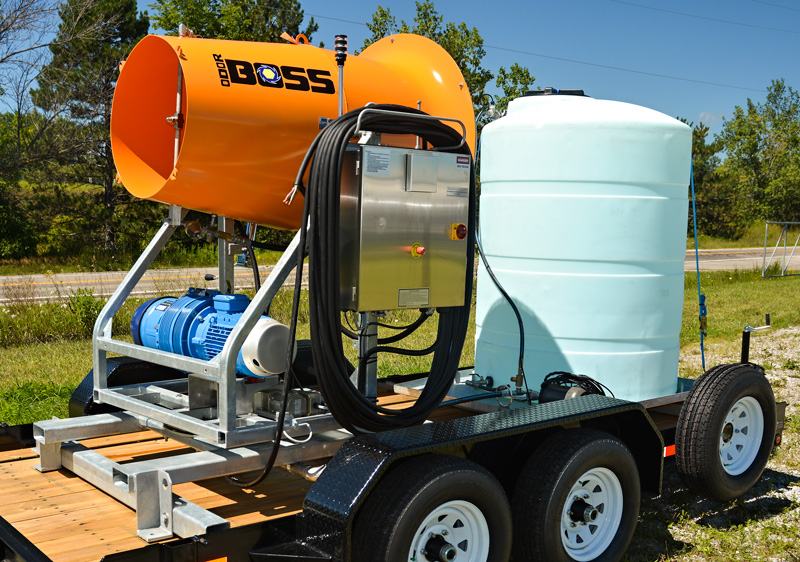 The OB-T is designed to attack odor at the source with surface treatment deodorizers. The OB-T can be fed from a hose with a dosing pump to meter in the deodorizer. Alternatively, it can be paired with a water tank for premixing, both of which are placed on a trailer for mobility.

Topical treatment deodorizers are designed to land on odor-producing surfaces, nullifying the odor before it becomes airborne. This method is extremely effective, but not always economically feasible for large coverage areas or when the material is disturbed often.

The OB-G is used when surface treatment is not practical. Oftentimes, air treatment means perfumes are shot aimlessly in the air with no consideration to the type or weight of the odor vapor, or any other physical and chemical characteristics, Lewis says. OB-G produces smaller droplets than the OB-T so the deodorizing solution can be converted into a gas and effectively distributed in the air.

“It’s really taking off,” Lewis says. “As odor control continues to become more important to landfills and other operations, I remind facilities that they have the option to rent our equipment before committing to a purchase. We want to make sure we are giving them the right solution for their odor problems.”