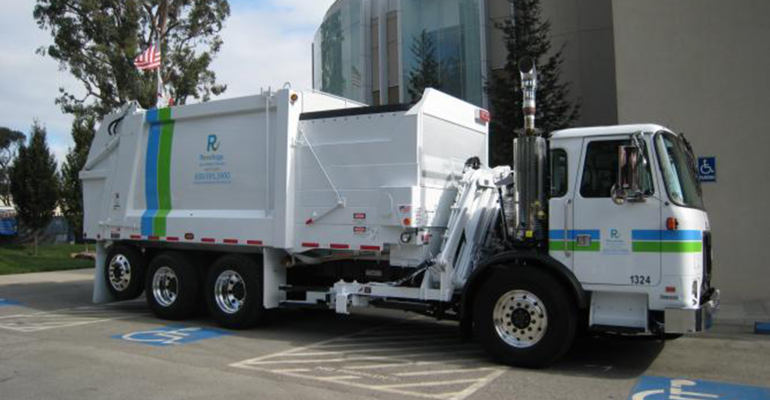 Californians are laid back, right?  Maybe not when they’re reacting to noise from trash collection.  Last month we looked at an early morning racket at a restaurant in Los Angeles.  It drove a nearby resident to file a lawsuit.  This month, we’re up north.

Californians are laid back, right?  Maybe not when they’re reacting to noise from trash collection.  Last month we looked at an early morning racket at a restaurant in Los Angeles.  It drove a nearby resident to file a lawsuit.  This month, we’re up north.

Raymond Digiacomo, Jr., lives in an apartment building in San Francisco’s Union Square District.  The area offers some of the city’s best nightlife, dining, entertainment, and luxury shopping. These amenities, however, add nothing to his comfort and lifestyle.  On the contrary, the vibrancy of the neighborhood only makes things worse.  He suffers from debilitating mental health challenges that are aggravated by lack of sleep.

Recology collects recyclables, compost material, and solid waste late at night and early in the morning in Maiden Lane, the alleyway below his apartment and the service area for high-end boutiques that front on Geary and Post Streets.  Adding to the din is chronic “dumpster diving” in unlocked collection bins.

Digiacomo filed suit, in December 2019, against Recology for carrying on a private nuisance stemming from the noise generated from Recology’s collection activity and the noise from the scavenging in the unlatched bins.

He alleged that his building is a supportive residential facility that "houses those suffering from some form of mental health related challenge, and are thus members of San Francisco's most [v]ulnerable population, and are thus especially susceptible to the ramifications of continual sleep deprivation."  His filing included a sworn declaration from a co-tenant who suffers from liver disease and a heart condition that requires him to get adequate sleep.

In November 2020, he filed a motion for a preliminary injunction to prohibit Recology from servicing in Maiden Lane from 10:00 p.m. to 7:00 a.m. and to compel the company to install locks on its bins. Recology forcefully opposed the request.

Following a hearing, the trial court denied the motion. First, Digiacomo did not show a likelihood that he would prevail on his claim that Recology had a legal duty or, for that matter, any ability to control or eliminate the “dumpster divers” who, he alleged, create a substantial amount of the objectionable noise.  Second, although Digiacomo and his co-tenant found the noise to be beyond their tolerance, these allegations and their "unique medical issues" would not persuade an objective factfinder that the noise was unreasonable and substantial. Third, a city ordinance regulated noise generated by waste and recycling removal and collection services by providing an “objective standard" for measuring the reasonableness of the noise at issue. Digiacomo, however, provided no evidence to suggest that the noise he experienced violated that ordinance.

Balancing the respective harm if the injunction were denied or granted, the trial judge concluded that Digiacomo was not entitled to the relief he sought.  Despite his claim that he would “continue to experience the mental and physical health ramifications of persistent and chronic sleeplessness,” the judge concluded this statement was too general to prove the requisite harm.  Likely far more significant was the fact that Digiacomo had, for two years, been living in the conditions he complained of.  On the other hand, the court found that granting the injunction would require Recology to "effect a wholesale change in waste collection schedules and policies while facing a shortage of drivers due to the COVID-19 pandemic."

On appeal, Digiacomo argued that the trial court was wrong in determining that he had not established a viable claim for nuisance and that the balance of hardships was not in his favor.  The appellate panel disagreed and upheld the trial court’s order.  “Considering this record along with the lack of showing of likelihood of success on the merits, the trial court did not arbitrarily conclude that appellant failed to establish entitlement to any aspect of the preliminary injunctive relief he requested,” the panel concluded.

Under California law, a private nuisance includes "[a]nything which is injurious to health,  . . . or is indecent or offensive to the senses, . . . so as to interfere with the comfortable enjoyment of life or property . . . ."  Excessive and inappropriate noise may disrupt an individual’s use and enjoyment of his or her property.

However, to prevail on an action for private nuisance, a plaintiff must prove the intrusion was unreasonable and caused him or her to suffer substantial actual damage. “It is an obvious truth that each individual in a community must put up with a certain amount of annoyance, inconvenience and interference and must take a certain amount of risk in order that all may get on together,” noted the appeals court. “The very existence of organized society depends upon the principle of ‘give and take, live and let live,’ and therefore the law . . . does not attempt to impose liability or shift the loss in every case in which one person's conduct has some detrimental effect on another. Liability . . . is imposed in those cases in which the harm or risk to one is greater than he ought to be required to bear under the circumstances, at least without compensation.”

Both unreasonableness and substantial damage are interrelated and are judged by an objective standard.  It’s not a matter of whether a particular plaintiff with his or her vulnerabilities was annoyed or disturbed, but whether an individual of normal sensitivity living in the same community, looking at the whole situation dispassionately, would consider it unreasonable.

As the appeals court saw it, the trial judge reasonably concluded that Digiacomo would not succeed on the merits of his claim.  First and foremost, he failed to show that Recology had a legal responsibility for the noise or activities of third parties – so-called "dumpster divers."  In addition, despite his allegations and his co-tenant’s declaration, the panel believed, as did the trial judge, that no objective fact-finder would find the noise to be substantial and unreasonable.

The law in most states, including California, gives judges the power but not the obligation, before or during a trial, to appoint an expert to investigate, prepare a report, and testify on any matter where expert evidence is appropriate – whether or not a party makes a request.

Digiacomo claimed that the trial judge was wrong in failing to appoint a sound technician to render an objective measure of the noise "to essentially re-create said sound level for a jury to analyze at the time of trial."  However, this authority is purely discretionary, and the trial record did not reflect that Digiacomo had asked for an expert.  That the judge did not independently appoint an expert was not an abuse of his discretion, the panel found.

Finally, the trial judge was neither arbitrary nor unreasonable in determining that the balance of harms did not favor a preliminary injunction.  In opposing the injunction, Recology presented evidence that only its customers can decide to pay for a locked collection bin, and the company could not unilaterally impose a rate increase for providing locks without a formal public hearing. It also presented evidence of the difficulties in guaranteeing waste collection in Maiden Lane at the times preferred by Digiacomo – between 7:00 a.m. and 10:00 p.m.  The alleyway is not always open to vehicle traffic, and the company has preassigned routes.  Its pandemic-related driver shortage and fleet mechanical issues can require deviation in scheduled pickup times.

Fact is, the alleged nuisance began in August 2018, and Digiacomo did not request an injunction until November 2020.  All of a sudden a court must shut down Recology’s nighttime collection?  No.