Waste and recycling industry employment reached a record high in 2014, according to data from the Labor Department's Bureau of Labor Statistics.

Employment increased by 8,700 for year, bringing total waste and recycling industry employment to 383,300. 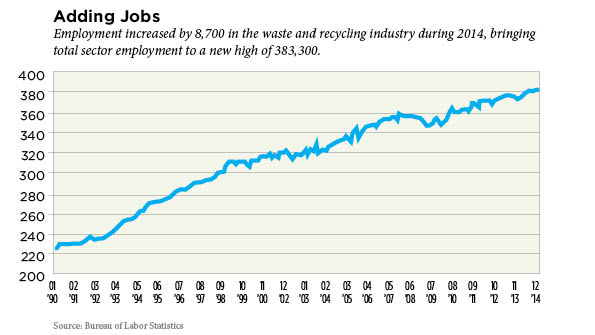 The industry added 800 jobs in December, marking the ninth consecutive month employment rose from the previous month. Since a five-year industry low in employment in January 2010, nearly 34,000 jobs have been created in waste and recycling, a jump of almost 10 percent.

“Industry employment tends to weather adverse economic conditions and flourishes during good times,” said Bret Biggers, the Washington-based National Waste & Recycling Association (NW&RA) director of statistics and standards, in a news release. “Only once in the past 25 years has industry employment decreased on an annually adjusted basis – during the last recession in 2009. Population growth gives the industry stability, while general economic progress and consumer spending trends helps the industry grow.”

The industry’s unemployment declined to 3.4 percent in December, dropping from 8.5 percent at the start of 2014.