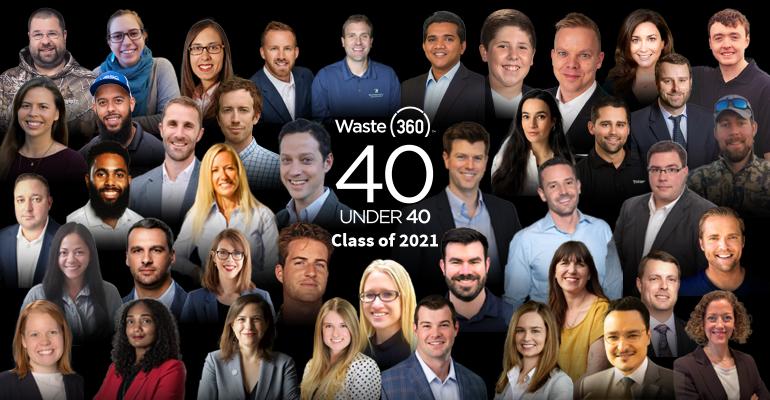 We are delighted to announce the winners of the Waste360 40 Under 40 awards. And to say this was a tough choice is putting it mildly. We had hundreds of qualified nominations for this award that recognizes inspiring and innovative professionals under the age of 40 whose work in waste, recycling and organics has made a significant contribution to the industry.

It is a testament to the talent in our industry that this year’s winners are involved in every sector of waste and recycling including haulers, municipalities, composters, recyclers, policymakers, engineers, researchers, sustainability experts and product suppliers.

In addition to the 40 impressive young professionals who have won this year, Waste360 has recognized innovation with two additional winners of the Innovator and Changemaker Awards.

Clark Dinnison, head of product, RePlenysh has been honored with the Waste360 Innovator Award, which recognizes innovators and forward thinkers who often use technology to better the industry. Dinnison is an innovative thinker and visionary to see beyond market norms and capitalize on the underserved markets by implementing strategic partnerships. He has created software and applications that have fundamentally changed the way business is done from collections and tracking to optimization. His work has changed the way materials are moved and used in a way that has not been done before.

Noah Moretter, CEO, Noah’s Recycling has been honored with the Waste360 Changemaker Award, which recognizes trailblazers who are creating real, meaningful, positive change for the waste, recycling and organics industry. During the pandemic, this young man started his own recycling company and donates a portion of the money he makes to a local food shelf. He has a passion for responsible recycling, saving the planet and wants to share his knowledge with his classmates, his community and the world. His goals are big, he wants to be the CEO of Waste Management.

Stay tuned as Waste360 will publish a series of in-depth conversations highlighting the winners’ lives and careers. You will be in awe of the work they are doing and will be proud to see that the future is bright with this class of young leaders.

Meet the winners in this gallery of the 2021 Waste360 40 Under 40 award recipients. Scroll through to see who they are what they have done to win such a coveted honor.