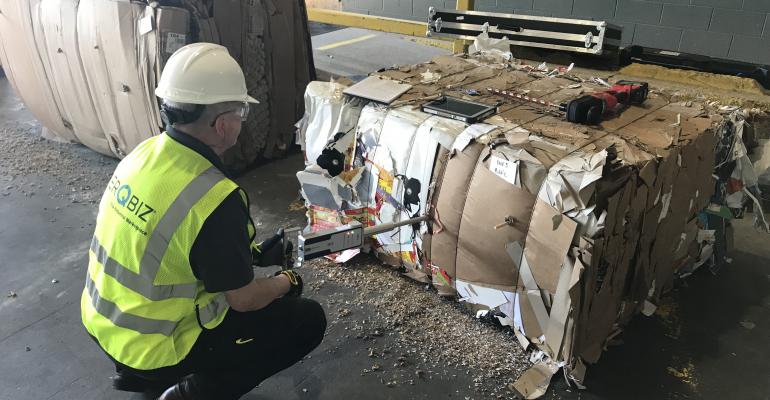 Amid China’s import ban, paper mills and technology developers are focused on strengthening their presence both domestically and overseas.

China has stated its plans to be self-sufficient in recycling by 2020 and has already banned imports of some commodities, with recovered paper among the hardest hit markets. In response, U.S. mills and technology developers have increased their focus on strengthening their presence both domestically and overseas, whether working to improve quality of existing feedstock or to figure out how to tap into new streams.

Georgia Pacific (GP) plans to run a commercial-scale demo on proprietary technology to deal with mixed and food-contaminated packaging. Extracted fiber is fed back into the paper-making process.

Some large mills are feeding more mixed paper into their processing systems through a method called detrashing, which is removing large volumes of contaminants at the pulper.

And merQbiz, which offers various supports to paper buyers and sellers, is using infrared technology to probe bales to get quality measurements.

Their work scratches the surface.

“The global and U.S. mixed paper markets are connected and have been teetering on oversupply for years, while paper quality has declined,” says Bill Moore, president of Moore & Associates, an Atlanta-based paper recycling consulting company. “China is pulling out of the market and has made the oversupply situation acute. It’s a wakeup call to the U.S. industry to put in more capacity for mixed paper.”

But while the domestic market is still oversupplied and a lot of mixed paper, in particular, is landfilled, Moore reports an uptick of activity.

“Domestic mills that can use mixed papers are working to improve their stock preparation equipment to be able to process more mixed paper. Amongst efforts in this area have been a series of small investments in detrashing to remove large contaminants at the pulper,” he says.

He cites equipment and systems companies like Andritz, Kadant and Voith as those working on improving stock preparation equipment to clean and screen mixed paper to increase domestic use.

GP is running a pilot to prove out technology it has developed involving wraps, food containers, paper cups and materials like metals and plastics that are collected in public venues.

Bales containing these materials are fed into GP’s process that removes commodities to send to respective markets, breaks down food and removes coatings. Remaining fiber is extracted to make new paper. The eventual plan is to take waste directly from venues like fast food restaurants, stadiums and business.

“We are collecting comingled, contaminated materials that there isn’t a way to capture today. The fiber we pull will supplement our recycled fiber supply for container board. And we are diverting material that otherwise would be destined for landfill,” says Julie Davis, a GP spokesperson.

merQbiz, which offers an online paper trading platform and various supports to buyers and sellers, including quality control, has begun using near infrared technology. It’s a way to probe bales without having to open them, in order to get quality measurements. Among measurements are moisture, percentage of plastics and ash-to-fiber ratios.

“Infrared has existed in the recycling space for some time, but using it for mixed paper bales is fairly new,” says Michael McSween, merQbiz head of research and development quality. The company has used the technology at a few mills. It has eliminated the need to break down bales and manually sort the contents and provides information to identify the amount of good, usable fiber.

The motivation for more improvements continues as the global market wanes.

In 2018, 5,541,396 metric tons of recovered paper and recovered paper pulp were exported to China. That’s down from the 8,851,462 metric tons during the same period in 2011, when China consumed 64 percent of U.S. paper exports, according to the Institute of Scrap Recycling Industries.

The good news is there is high demand domestically.

“The paper packaging business is fairly strong and strengthening, which is somewhat driven by the anti-plastic movement,” says Moore. “I’m confident that both materials recovery facilities and U.S. mills will apply their business ingenuity and put in capacity to use more mixed paper, improve overall quality and get the market back in balance.”