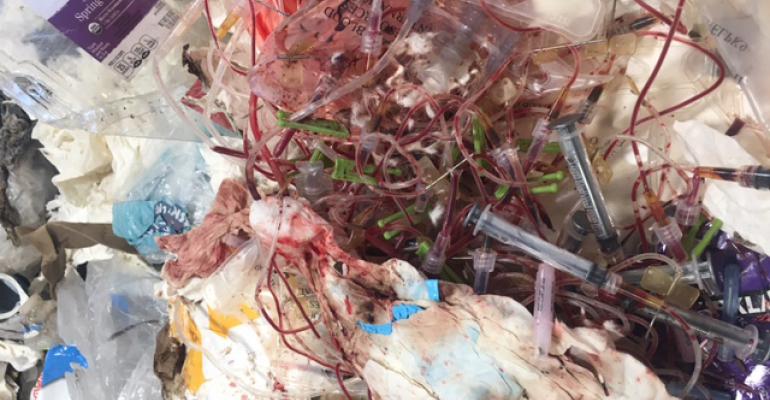 A dozen jurisdictions in the state already require manufacturers to manage wasted drugs and/or sharps, but there has been pushback.

California could soon become the first U.S. state to require manufacturers to take back unused and wasted needles, and the third state to mandate that they reclaim discarded drugs.

The SB 212 bill, which would ensure manufacturers create and fund such programs, was approved by the assembly appropriations committee on August 16 and is headed to the assembly floor. If it passes there, it moves on for the governor’s signature.

In the meantime, local governments, as well as waste management operations, have been taking action on their own to protect communities and workers.

At the government level, 12 California jurisdictions have ordinances requiring manufacturers to manage wasted drugs and/or sharps, though there’s been pushback. Big pharma challenged Alameda County’s drug takeback rule, taking it all the way to the U.S. Supreme Court. Industry lost, and Alameda has since successfully added sharps to its ordinance.

On a larger scale, Heidi Sanborn, executive director of California Product Stewardship Council (CPSC), says, “I have been asking industry to work with us on a statewide law since 2010, and they had refused. But we are coming after them one county at a time. If they fail to negotiate in good faith and get this bill passed this year, we will continue to protect public health and safety by passing more local ordinances.”

Jurisdictions are getting stricter, she says, because the first counties to pass laws are telling new counties where the holes were, and they are getting fixed.

CPSC is especially concerned about needle sticks, particularly those happening outside of controlled settings, including on the front lines of materials recovery facilities (MRFs). 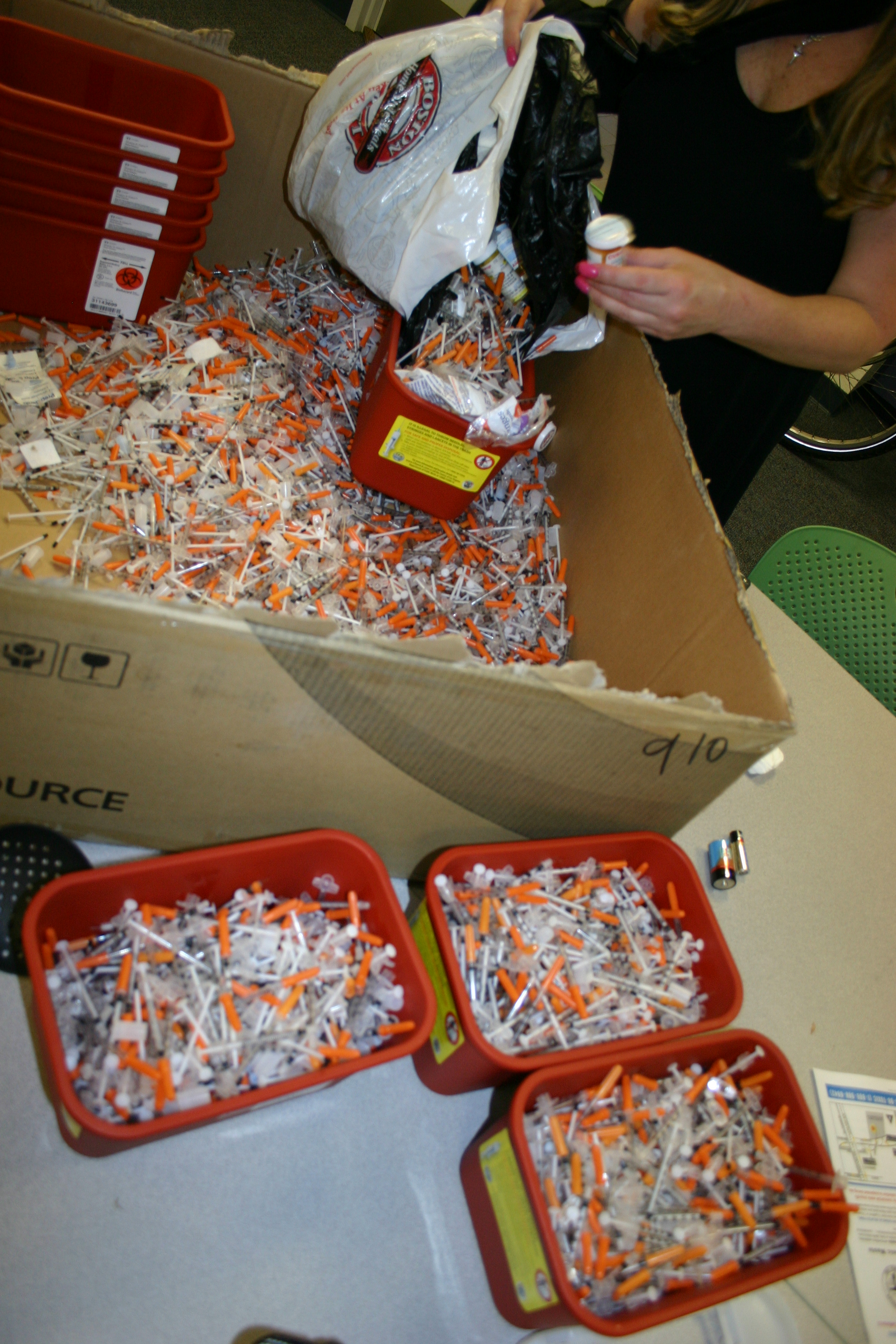 At Zanker Recycling and GreenWaste Recovery’s San Jose MRF, 40 needle sticks were reported in the past three-and-a-half years. And it’s estimated that only about half of incidents are brought to light because employees worry they’ll be stigmatized, not to mention they are scared, says Michael Gross, director of sustainability at Zanker Recycling and GreenWaste Recovery.

Workers are asked to be tested for bloodborne pathogens and may be asked to undergo preventive, antiviral treatments. There is follow-up for about six months after injury as they await what hopefully is confirmation they have contracted no infections.

The GreenWaste Recovery facility has seen a decrease in sticks because of better safety training, but the hazards still exist.

“We find sharps in recycling and trash bins. Some are loose and some packaged in milk jugs and other containers, and sorters don’t typically stop to think needles may be in them,” says Gross.

Workers wear safety gear, including double gloves. But they aren’t puncture proof, so needles can get through. And gloves don’t protect the whole body.

“We had a person on the secondary sort line get stuck because someone threw off cardboard, not knowing a needle was stuck in it. It went about 20 feet and landed in the worker’s leg,” explains Gross.

Still, he believes MRFs could serve as “middlemen” to safely manage sharps. 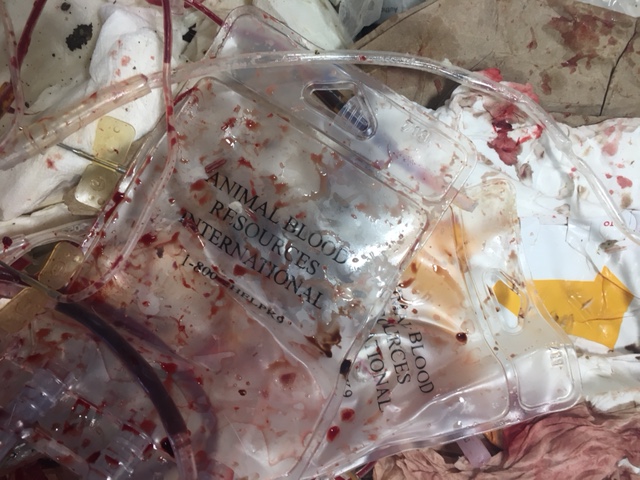 “If manufacturers provided consumers containers that can take the impact of a packer blade on a refuse truck, and those containers were identifiable, they could go into recycling bins. We could put containers in gaylord boxes to be sent to a hazardous waste facility,” says Gross.

Senator Hannah-Beth Jackson (D-Santa Barbara), an author of SB 212, is focused on the drug takeback portion.

She tried to bring a model based on a successful British Columbia provincewide stewardship program to California, as she was concerned when she learned pills get flushed and end up in the wastewater treatment system, which can’t filter many drug chemicals.

“The pharmaceutical industry said we don’t want to do this,” says Jackson. “But as counties and cities started implementing their own rules, the industry began realizing it’s better off having one standard. Now, we are working together because if there is no statewide program, there will be 58 counties and 400 cities that will be all over the place in how they handle pharmaceuticals.”

“It’s complicated, but we have all stakeholders at the table,” she adds. “I’m convinced we will get a bill passed and signed into law this year.”

Tehama County Solid Waste Management Agency runs a countywide home-generated sharps program that collects 2,700 gallons of needles annually. It partners with local hospitals to buy and distribute containers for home use. And the agency sets up public kiosks where residents can dispose sharps in containers.

But those living in remote areas don’t have easy access, and many don’t use them, says Rachel Ross, manager of Tehama County Solid Waste Management Agency.

She believes the lacking convenience factor is why the county is seeing more needles in recycling bins.

“It’s obviously not working for everyone,” explains Ross. “Plus, the program costs the county $20,000 a year, which is expensive when you look at it by cost per person; we’re a fairly small region and only so many residents use the program.”

Speaking of the latest movement on SB 212, Assemblymember Phil Ting (D-San Francisco), who worked on the sharps portion, says, “It's a testament to the hard work by legislative staff and stakeholders who have been very engaged throughout this process. I remain hopeful that we'll get a strong bill to the governor by the end of the month.”