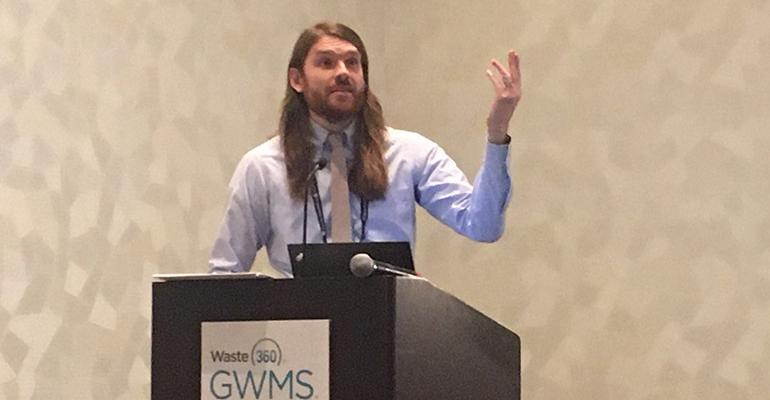 “The pressure is really on us right now to better understand and reduce our emissions in our landfills, with a focus on methane. We are facing pressure from our shareholders, from our communities and from our state and local governments to find ways to reduce emissions by setting emissions limits and tighter warming standards,” said Banister. “We are looking toward the future of carbon pricing schemes, with some states already looking at that and already implementing taxes. The federal government is looking at that as well.”

“In order for us to be able to participate in that, we really need good measurement methodology. What we have available to us today is very old and has been based on applicability to determine if the federal rule applied to you or not,” she added. “So, we need some other answers, and we are going to need them quickly as emissions reductions mandates take place.”

The key highlight of the workshop overall was a look at the National Aeronautics and Space Administration’s (NASA) work to characterize point source emissions from solid waste operations in California. NASA's research for this project was partially funded by the California Air Resources Board, which highlights the state's top sources of methane emissions in the chart below. 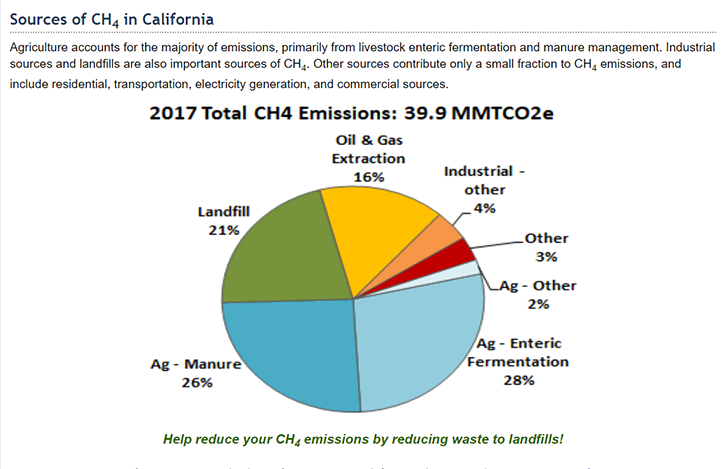 Over a two-year span, NASA’s Jet Propulsion Laboratory at the California Institute of Technology flew its next-generation advanced visible/infrared imaging spectrometer (AVIRIS-NG) over thousands of methane emitters in California, including some of the state’s largest landfills.

The study highlighted two particular cases at landfills, where NASA was able to image methane plumes, or sensitive concentrations of methane emissions, explained NASA scientist Dan Cusworth, who spoke about his research at GWMS. 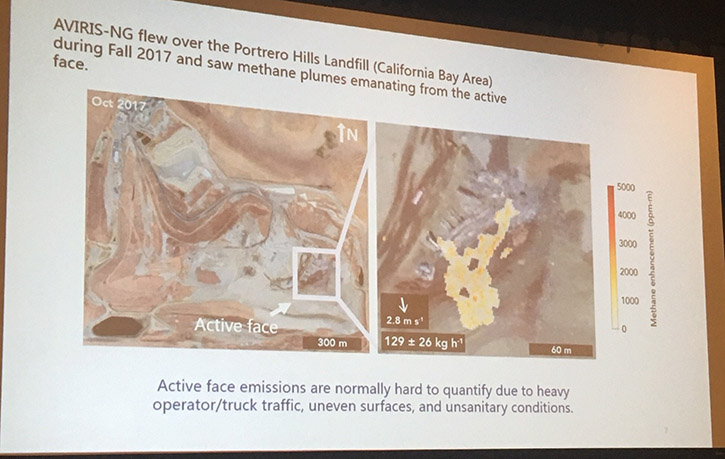 Waste management is the largest methane point source emission sector in California (41 percent of NASA’s study total), driven by a small fraction of landfills. NASA observed these plumes at 30 out of 270 surveyed facilities.

The study involved flying NASA’s AVIRIS-NG over 272,000 facilities in California that potentially could have a methane plume associated to it.

To pinpoint the point source of methane plumes at landfills in California, Cusworth said it was tricky since active-face emissions at landfills are harder to quantify.

For one case study, the AVIRIS-NG flew over the Portrero Hills Landfill (California Bay Area) during fall 2017. Cusworth said active-face emissions are normally hard to quantify due to heavy operator/truck traffic, uneven surfaces and unsanitary conditions. When NASA came back to the site a year later, it noticed that active-face emissions ended up shifting. Ultimately, NASA determined that active-face methane emissions are hard to measure in situ but potentially make up a significant portion of the total landfill emissions. 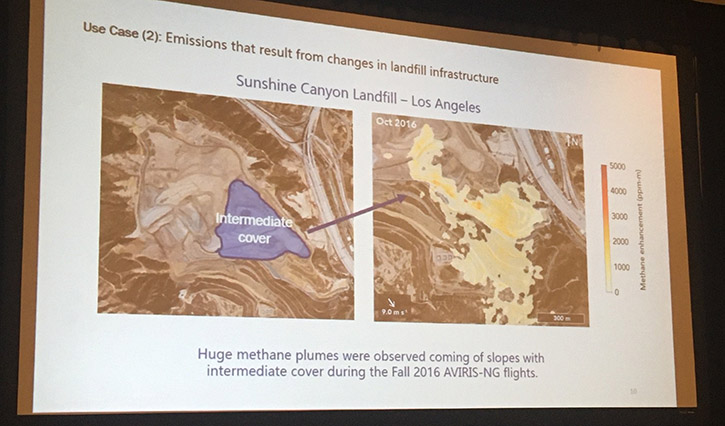 “We detected larger methane plumes at the Sunshine Canyon Landfill and contacted the local enforcement agency,” noted Cusworth. “They developed several infrastructure improvements, and after implementation, AVIRIS-NG saw a reduction in methane at the landfill.”

The local agency determined that previous poor municipal regulations were the culprit. Under a federal standard, at the end of each day, daily cover was placed over the active face of the landfill slope. The next morning, the cover was peeled back before new trash was dumped.

However, under a 2009 municipal regulation, daily cover at Sunshine Canyon stopped being pulled back before new dumping, which led to perched leachate and gas blowouts near the surface, explained Cusworth.

Cusworth credited the landfill and its operator Republic Services for its swift action and making the necessary investments to remediate the issue.

In its third case study, NASA looked at methane emissions from composting. Cusworth noted that although composting facilities currently are not required to report their emissions, AVIRIS-NG detected large methane plumes emanating from two facilities. 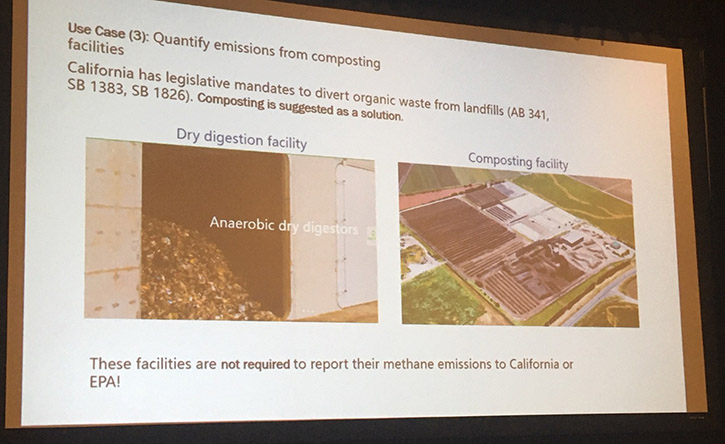 NASA found that the largest amount of emissions emanated from a lack of gas capture in the organics separation facility and that holes in bags led to methane leakage.

Overall, NASA’s findings indicate that an industry that was once “invisible” to the public is now under enhanced scrutiny. So, having the most up-to-date information to measure and ultimately reduce methane emissions moving forward will be top of mind for landfill operators.