Home>The Business>Business Operations
Recent
GFL Revenue Up Nearly 30% (and a 37.6% increase in Adjusted EBITDA and a solid update on acquisitions)
May 06, 2021
Part 2: Curtain Call for Early PFAS Compound
May 06, 2021
Ohio EPA In Court Over Toxic Debris at Arco Recycling Dump
May 06, 2021
University of Maine Launches a Campaign to Reduce Food Waste
May 06, 2021
Tool Enables U.S. Companies to Set Ambitious Packaging Strategies to Reduce Plastic Waste
May 06, 2021
Too Good To Go Expands Nationally, Bringing Food Waste Solution To West Coast
May 06, 2021
Episode 17: Making Waste an Asset with the Appalachia Ohio Zero Waste Initiative
May 06, 2021
Republic Solidifies Santek Deal and Reports Robust Q1 Earnings
May 06, 2021 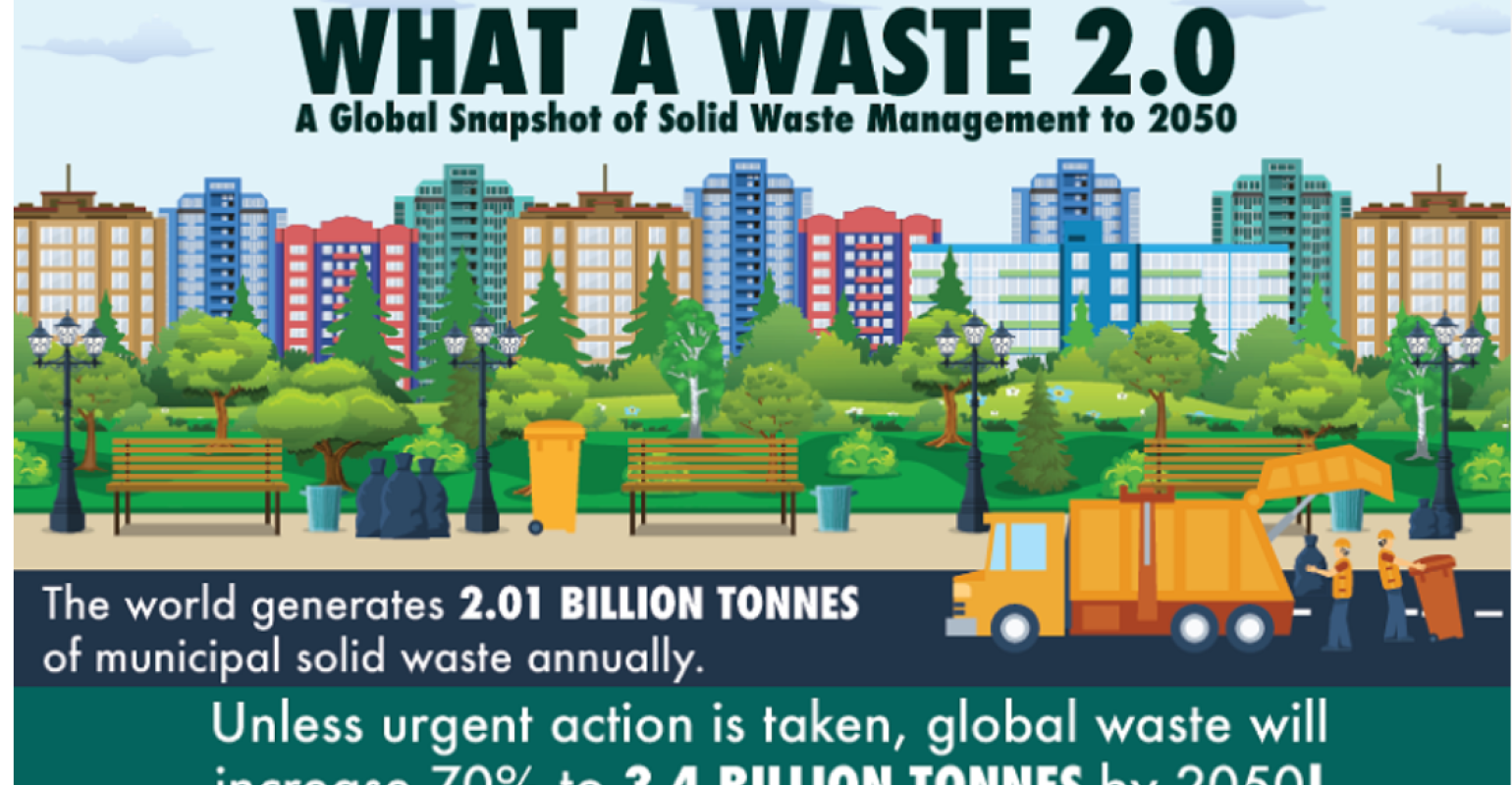 According to World Bank Group, unless urgent action is taken, global annual waste generation is expected to jump to 3.4 billion tons over the next 30 years.

Without urgent action, global waste will increase by 70 percent on current levels by 2050, according to World Bank Group’s new report, “What a Waste 2.0: A Global Snapshot of Solid Waste Management to 2050.”

Driven by rapid urbanization and growing populations, global annual waste generation is expected to jump to 3.4 billion tons over the next 30 years, up from 2.01 billion tons in 2016, the report finds.

Although they only account for 16 percent of the world’s population, high-income countries combined are generating more than one-third (34 percent) of the world’s waste. The East Asia and Pacific region is responsible for generating close to a quarter (23 percent) of all waste. And by 2050, waste generation in sub-Saharan Africa is expected to more than triple from current levels, while South Asia will more than double its waste stream.

Plastics are especially problematic. If not collected and managed properly, they will contaminate and affect waterways and ecosystems for hundreds, if not thousands, of years. In 2016, the world generated 242 million tons of plastic waste, or 12 percent of all solid waste, according to the report. 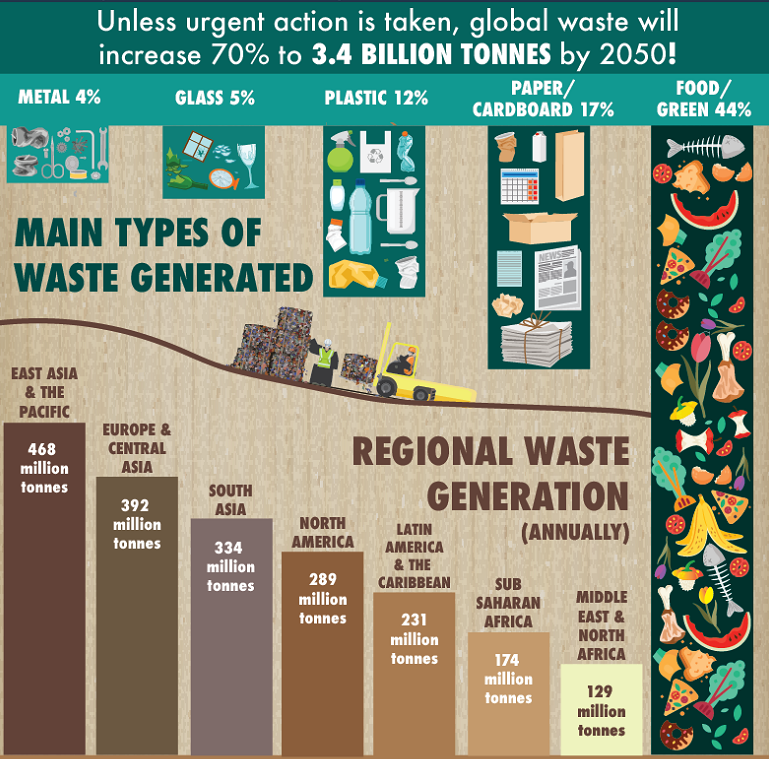 “While we have serious solid waste issues in the United States, they pale in comparison to the growing solid waste crisis in developing countries,” says David Biderman, executive director and CEO of the Solid Waste Association of North America (SWANA). “The combination of population, rapid urbanization, increased waste generation and the lack of modern solid waste management facilities means millions of tons of solid waste are not being handled properly on a daily basis. The public health and environmental impact of this cannot be understated, including plastic and other waste in rivers and other bodies of water, contributing to the global marine litter problem. Hopefully, World Bank’s report will galvanize action to address these global environmental issues.”

In addition, notes Biderman, tens of thousands of people live on dumpsites in Asia, Africa and Latin America, scavenging for something to sell.

“Their living conditions are horrific, and the waste poses a serious threat to their health and safety. These dumpsites do not capture methane and convert it to renewable energy,” he emphasizes. “Instead, they contribute to climate change, and leaks and runoff contribute to surface water and groundwater contamination.”

Biderman points out that perhaps most tragic has been the increase in dumpsite slides over the past few years. Because most of these dumps are poorly designed and operated, they are unstable, particularly after heavy rains, which are common in the tropics, he says. Last year, a catastrophic dump slide killed more than 100 people in Addis Ababa, Ethiopia.

“For all of these reasons, SWANA strongly supports the International Solid Waste Association’s (ISWA) Close the Dumpsites Campaign and is working with World Bank and others to provide technical assistance, capacity building and technology transfer to solid waste professionals and others in the field to modernize the solid waste infrastructure in developing countries,” says Biderman.

World Bank also notes that based on the volume of waste generated, its composition and how the waste is being managed, it is estimated that 1.6 billion tons of carbon dioxide equivalent were generated from the treatment and disposal of waste in 2016—representing about 5 percent of global emissions.

“Mismanagement of waste is harming human health and local environments while adding to the climate challenge,” said Laura Tuck, vice president for sustainable development for World Bank, in a statement. “Unfortunately, it is often the poorest in society who are adversely impacted by inadequate waste management. It doesn’t have to be this way. Our resources need to be used and then reused continuously so that they don’t end up in landfills.” 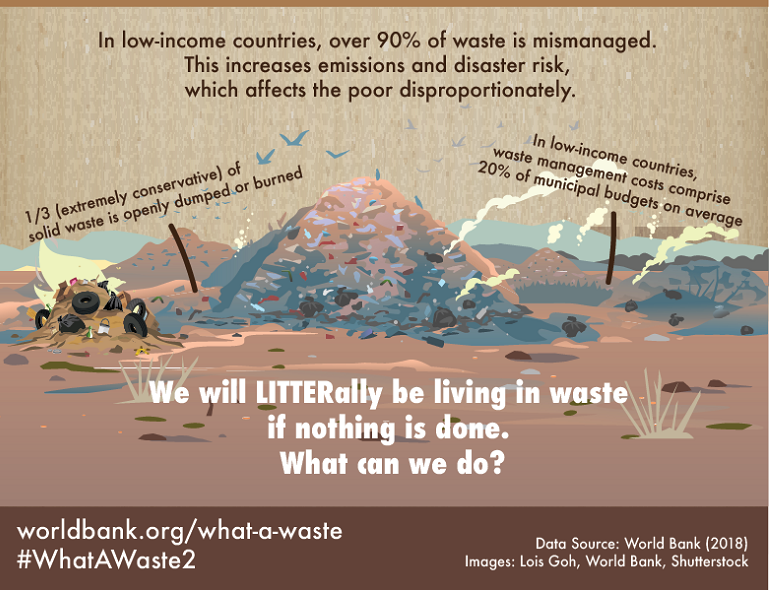 The report notes that good waste management systems are essential to building a circular economy, where products are designed and optimized for reuse and recycling. As national and local governments embrace the circular economy, smart and sustainable ways to manage waste will help promote efficient economic growth while minimizing environmental impact.

“It makes economic sense to properly manage waste,” said Silpa Kaza, World Bank urban development specialist and lead author of the report, in a statement. “Uncollected waste and poorly disposed waste have significant health and environmental impacts. The cost of addressing these impacts is many times higher than the cost of developing and operating simple, adequate waste management systems. Solutions exist, and we can help countries get there.”

Since 2000, World Bank said it has committed more than $4.7 billion to more than 340 solid waste management programs in countries across the globe.