Zero waste” has become a worldwide, instantly recognizable phrase used to describe a broad set of efforts to reduce, minimize or eliminate waste. The intended meaning of the term varies widely, ranging from the purely aspirational, without any specific waste reduction targets or deadlines, to the most ambitious goal of “zero waste to landfill” (ZWtL), which implies the total elimination of residuals requiring landfill disposal, with firm deadlines for achieving this.

Around the world, ZWtL initiatives have been launched primarily at the local government level, where the responsibility for dealing with garbage typically falls. The first local government ZWtL initiative declared was in Canberra, Australia, in 1996, when the “NoWaste by 2010” campaign was launched. Since then, similar 100 percent diversion goals have been adopted globally, including in many communities across America.

However, ZWtL has proven to be a chronically elusive goal. In every single instance, formally-adopted ZWtL initiatives have either failed or been abandoned ahead of their target dates, or else are clearly on track toward similar failure/abandonment.

This study consisted of a general survey of the global set of ZWtL initiatives, as well as in-depth examination of campaigns in four case study locations: Canberra, Australia; Christchurch, New Zealand; Toronto; and San Francisco. The first three initiatives are already confirmed failures, while San Francisco’s ZWtL by 2020 campaign is ongoing.

Results to Date of Zero Waste to Landfill Initiatives

Zero waste to landfill campaigns can be considered failures simply because none of the municipalities that have adopted such goals have managed to wean themselves off of landfill dependence. Results vary in each case, but there is a typical profile of trends, as seen in Fig. 1. 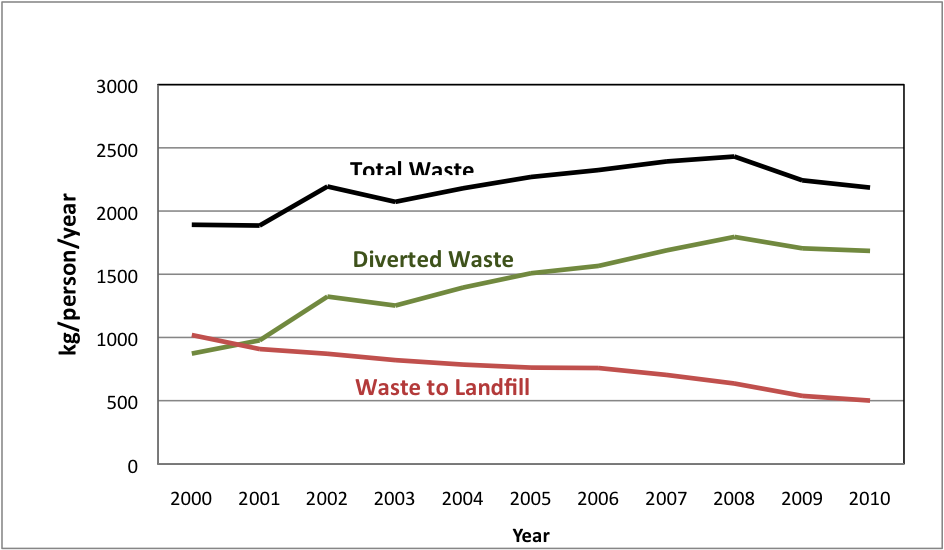 Since San Francisco launched its ZWtL by 2020 campaign in 2003, its percent diversion from landfill rate has steadily increased. This statistic – percent diversion – is the one that San Francisco frequently cites to promote its performance on zero waste, with the figure recently reported to have surpassed 80 percent (not without some skepticism in regards to how that figure is calculated).

However, as Fig. 1 illustrates, increases in amounts of waste have coincided with an overall increase in total waste generation, which has resulted in the more pertinent statistic – per capita waste to landfill – not trending downward as much as it should. While this figure has decreased by roughly half, from around 1,000 kilograms per person per year to around 500 kg over a 10-year period, this merely reflects the “low-hanging fruit” of the waste stream being removed, leaving problematic wastes that current resource recovery systems are largely unable to divert from ultimate landfill disposal. This means that San Francisco, with its 2020 deadline for ZWtL looming, faces a struggle in terms of achieving the ultimate 100 percent diversion goal.

Meanwhile, other ZWtL initiatives have already  missed the mark with their respective campaigns. The Canberra campaign persisted for 13 years of its 14-year timeline, before being publicly renounced in 2009 by the city/territory’s Chief Minister, as a goal that would “never, ever be achieved.” Meanwhile, Toronto’s initiative lasted for six years of its nine-year timeframe, before that city’s purchase of a new landfill within Canada – solving the problem of controversial cross-border shipments of waste into Michigan – led to a Council vote to abandon ZWtL in 2007. Christchurch’s campaign was even more short-lived, as it was formally dropped by its City Council just three years into its 22-year schedule, in 2001, in favor of pursuing a public-private joint venture to develop a new regional landfill.

In all of the above cases, the ZWtL initiatives resulted in modest reductions in per capita waste to landfill while the campaigns were ongoing. However, in none of these cases did this amount decrease by even as much as 50 percent – and with the last half of residual waste much harder to divert fom landfill than the first, it is clear that none of these places have come even close to the halfway mark in achieving their zero waste goals, before giving up. This recurring pattern of failure represents a hard-to-ignore warning for cities such as San Francisco, whose ongoing ZWtL campaigns may find it difficult to buck the trend and achieve 100 percent diversion.

The overarching reality about ZWtL is that it is a concept requiring “top-of-pipe” solutions, whereas initiatives to date have been focused on “end-of-pipe” measures.

For 100 percent diversion from landfill to become a reality, all of the following must somehow be realized:

• Problematic materials, such as plastics and composites that defy existing landfill diversion, must be completely eliminated from the waste stream. That means changes in the design of a myriad everyday products, including:

- Automobiles and most other motorized vehicles

- Some types of food packaging

- Medical wastes – which are the byproducts of, in some cases, life-saving equipment and products

• Product design must be shifted entirely away from current designs for disposability, and refocused toward building products designed to last a long time, and to be reused and/or taken apart and reassembled into new products.

What is required for the above changes to take place, is no less than:

In other words, zero waste to landfill represents an undertaking that is, to put it mildly, massive and far-reaching in depth and scope.

While the adoption of such an ambitious goal would logically be accompanied by the assembling of a comprehensive plan for its attainment, ZWtL initiatives appear, in every observed case, to be missing this critical blueprint for success. This planning void is not a complete absence of planning per se, but rather a dearth of meaningful and far-ranging strategies for addressing problematic wastes at the top-of-pipe. What is seen instead, in the case of each ZWtL campaign investigated, are mostly end-of-pipe measures, consisting mainly of expanded recycling programs with limited impact.

The consistent existence of this planning void in ZWtL campaigns can be traced to another recurring feature of these initiatives: a lack of clear, public articulation of what ZWtL entails. While the 100 percent diversion goals are typically launched amid bold rhetoric about becoming a “waste free society” (Canberra, 1996), or moving “beyond the landfilling of garbage” (Toronto, 1996), or seeing all waste “diverted from landfill through recycling, composting or other means” (San Francisco, 2003), none of these clarion calls have come with an accompanying message that serious and unprecedented change and sacrifice are going to be needed to achieve the goal.

An example of this can be seen in Fig. 2, which shows some of the public promotion of San Francisco’s campaign, and is dominated by images of basic end-of-pipe recycling practices, where problematic materials and products still abound, and which overall evokes little sense of the fundamental effort needed to fully close the waste loop:

In other words, ZWtL initiatives, in all observed cases, fail to acknowledge the scope of change needed. As such, these campaigns seem doomed to failure from the start, as stakeholders are largely unaware of what is required, and as such the extreme effort expected for success simply does not materialize when and where it is needed.

The following are recommendations, based on the findings of this study, for turning the existing recurring pattern of ZWtL failure into one of consistent success:

ZWtL is about top-of-pipe solutions, so focus efforts there. For many people, “zero waste” is simply synonomous with recycling. While recycling has become a highly popular and feel-good staple of environmental activism in the United States and around the world, in its present form it actually falls far short of recovering 100 percent of resources out of the modern municipal solid waste stream.

ZWtL success requires the elimination of problematic materials, and better product design. Therefore, investment and energy need to be directed into these areas. This work will require enormous amounts of specialized skills and coordinated activity, and has the potential to stimulate economic development in places that proactively embrace zero waste thinking.

ZWtL needs support beyond local government boundaries. Campaigns for 100 percent diversion have so far mostly been taken on by local governments, as they are situatued at the very end of the waste pipe. And while they generally do a good job of managing the incoming flows of garbage, the reality is that local governments have almost no control over what comes down that pipe. Modern society has evolved to the state where everyday products are myriad in form, number and, most importantly, points of origin from all over the world. Asking local governments to solve the ZWtL riddle is therefore highly unrealistic.

What is needed is support from multiple local governments working together, and coordination at higher levels, including county, state, national and international bodies. The higher the level of government, the more feasible it becomes to deal effectively with problematic waste that originates from points all over the globe. Failing this, communites are left with few options for preventing landfill-destined waste from entering their waste streams, other than sealing the top-of-pipe off completely from outside sources.

The latter point is suggestive of the notion of communities removing themselves entirely from the global-market grid – an idea admittedly far removed from prevailing economic, political and cultural paradigms, but a reminder perhaps of just how large an undertaking zero waste to landfill really is.

Robert Krausz has recently completed a Ph.D. in Environmental Policy and Planning at Lincoln University in Christchurch, New Zealand, which investigated zero waste to landfill initiatives at the local government level in the United States, Canada, Australia and New Zealand.