Dealing With Firewater After A Fire 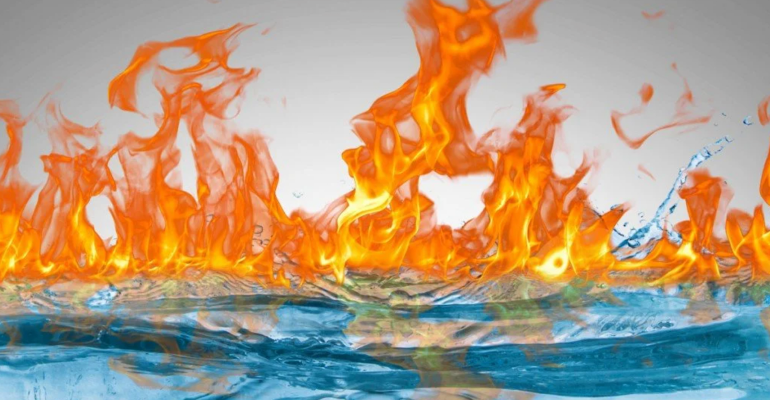 What is firewater? Firewater refers to water that has been used during firefighting operations. When too much firewater is used, it will require proper disposal. In many cases, it is a highly polluted material that contains dissolved and particulate materials from combustion processes and materials generated through quenching, as well as materials present in the building and equipment.

When we talk about catastrophic fires and their typical costs to waste and recycling operations, we focus on issues of building damage, business interruption and the time and effort of the fire professionals working on the scene. What we typically miss is firewater—the polluted water remaining after a fire—and the cost of gallons upon gallons of water that are used to successfully extinguish an incident. During this month’s article, I address this issue and how we can tackle it.

In April 2022, we encountered 39 reported fire incidents at our waste and recycling facilities in the U.S. and Canada. This is the second-worst April for fire incidents since last year’s number of 46, which was the worst month of all time. This month, scrap metal facilities took the top spot with 17 incidents. Additionally, 14 incidents occurred at waste, paper and plastic operations, five at organics sites, two at hazardous materials facilities and one at a construction and demolition (C&D) operation. At Fire Rover’s 300-plus client operations, we responded to 81 events. 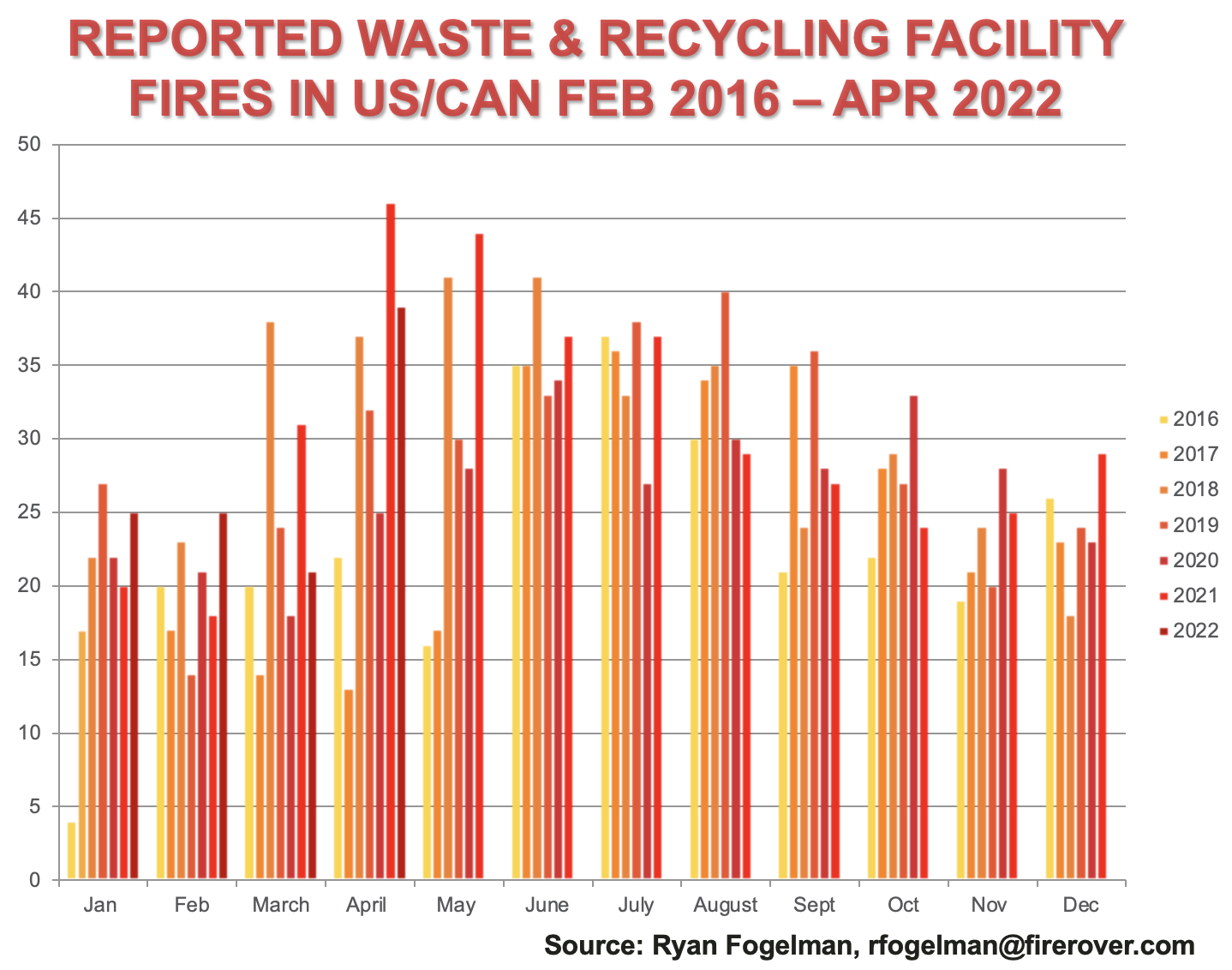 With April numbers back to historic highs, I thought it would make sense to revisit the forecasting slide I shared last year. 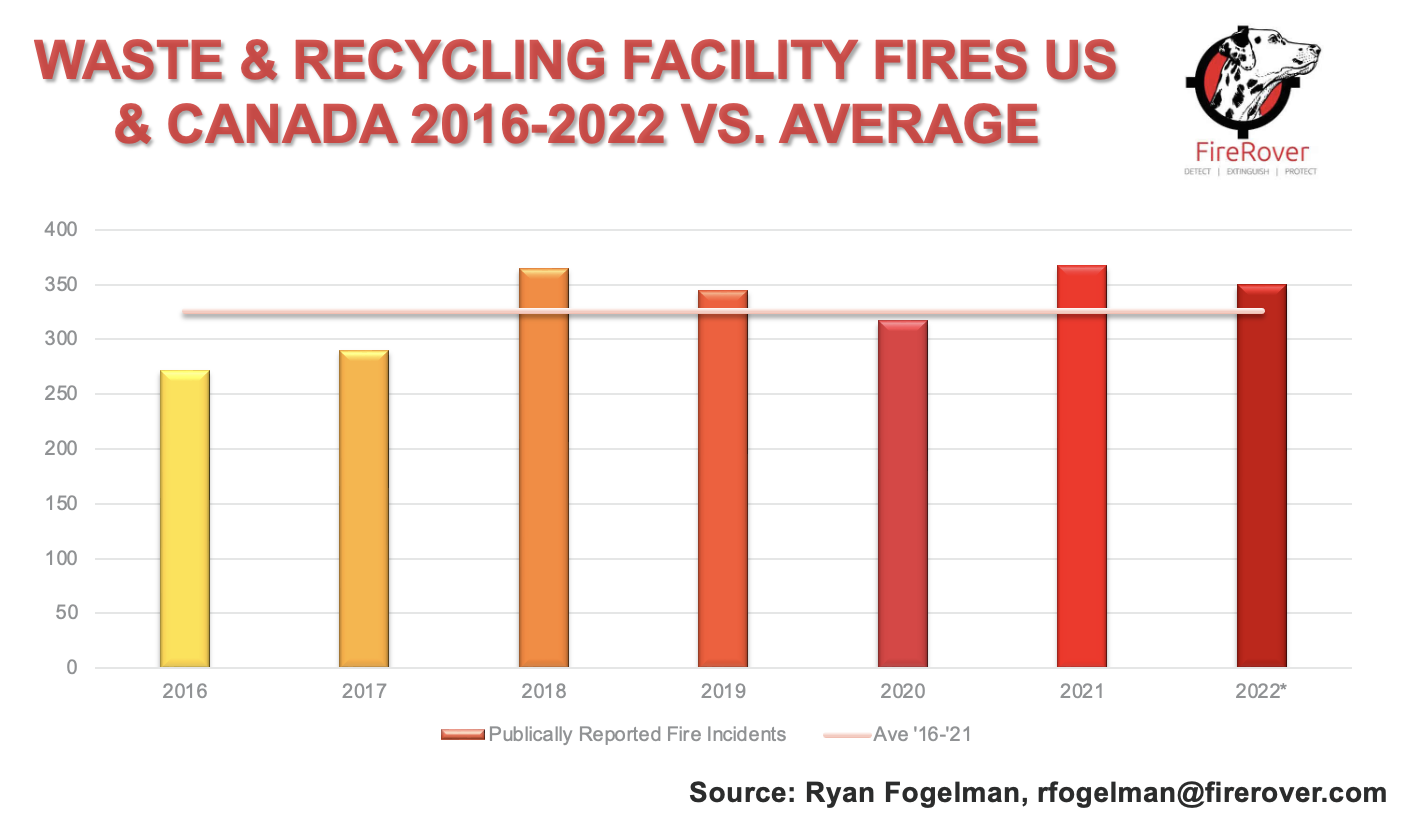 Based on the first four months of 2022, we are on pace to hit 350 fire incidents this year.  This forecasted number is down from last year’s 367 and 2018’s 365 but is still worse than 2016, 2017, 2019 and 2020. I will be keeping an eye on this number as we head into the traditionally heavy fire incident months of May-August when most of the U.S. and Canada experience higher temperatures. This year, like the past few, we are experiencing record droughts across our nation, which leads me to my next topic: the cost of using a copious amount of water when fighting a catastrophic fire at a waste and recycling facility.

Firewater is an Afterthought

What is firewater? Firewater refers to water that has been used during firefighting operations. When too much firewater is used, it will require proper disposal. In many cases, it is a highly polluted material that contains dissolved and particulate materials from combustion processes and materials generated through quenching, as well as materials present in the building and equipment. In many firefighting situations, large quantities of water remain after the fire has been extinguished.

Firewater’s pollution levels can vary based on the building or site being extinguished. For example, a building containing materials such as pesticides, organic and inorganic chemical reagents, fertilizers, etc., can increase the pollution level of firewater as those materials will likely be present in the firewater.

Proper disposal of firewater is important because improper disposal such as releasing contaminated firewater into a river or lake that supplies drinking water can lead to problems down the line when that water is taken to be used for food or beverage preparation. One of the most common techniques for disposal is to contain the firewater in the drainage system by using pneumatic bladders or lockable non-return valves.

So, how much water is used in the typical industrial fire? According to Jim Kirvida, president of Custom Fire Apparatus, "You'd need over 4,000 gallons of a water-and-foam solution per minute for 65 minutes in order to snuff out an industrial fire.” His example is based on a 180-foot diameter tank filled with hydrocarbons and comes to 260,000 gallons of firewater.

The first incident is of an organics facility, which has used 8 million gallons of water to contain a fire thus far. Yes, you read that right. You would need to build a pool about 2,136 feet long (almost as long as eight football fields), 400 feet wide and 80 feet deep to hold that much water. Or the equivalent of 85,333,360 SOLO cups filled at the 12-ounce mark.

According to, Sarah Reiff Swan, a senior code specialist at The FPI Consortium, “It is startling when you consider that commercial user fees for water in Lee County, Fla., are $6.54 per 1,000 gallons, while sewer fees are $5.85 per 1,000 gallons. With the discharge discussed above, that would work out to approximately $52,320 in water fees and $46,800 in sewer fees if the property were required to pay for the water used!”

The video below shows another fire incident in Ohio where more than 1,000,000 gallons of water needed to be trucked in to successfully eliminate a fire at a scrap metal facility.

If we use Swan’s numbers above, the water and sewer fees cost about $20,000, and that doesn’t include the cost of firewater cleanup after the event.

These are aberrations, but a simple search on Google will show you many more incidents.

The Less Water the Better

Early detection when the fire is small, targeting the fire and putting large amounts of water in this initial growth stage results in a significant reduction of total water usage. This was the finding of a 2020 FM Research Technical Report entitled "Reducing Water Demands with Innovative Fire Protection Solutions." In this report, smart monitors demonstrated the ability to reduce the amount of water necessary for uncartoned unexpanded plastic and cartoned unexpanded plastic fire sources by up to 88 percent. According to James Andy Lynch, founder and CEO of Fire Solutions Group, our Fire Rover would be classified as a smart monitor by Factory Mutual (FM) and is defined in the FM standard 1421 Approval Standard for Fire Protection Monitor Assemblies.

“Having been in the fire industry for more than 20 years, and working with a number of new and emerging technologies, I feel comfortable saying that Fire Rover has positioned itself as a must-have tool in the box of fire protection equipment we as engineers must consider when designing fire protection for a facility," says Lynch, who has worked with my team and myself in multiple capacities including designing systems for proper coverage, preparing variances using technical data to support its use, assisting with the FM approval process and submitting text changes to various fire codes.

Our solution is currently installed in 300-plus facilities across the U.S., Canada, the U.K. and soon to be Australia and France. As a complement, we recently launched the OnWatch solution for early detection, verification and dispatch of active landfill facings. The unit comes on a trailer, is 100 percent wireless and runs on 4G, is powered by renewable energy and is developed for harsh outdoor environments. The goal for our unit is to ensure that little or no water is used as well as dispatch fire early enough for “cover material” to be applied to snuff out most fire hazards as opposed to adding a ton of water to a landfill, which has its own issues with firewater.

Additionally, Fire Rover has designed and installed a continuous flow solution for waste-to-energy facilities, hangers, refineries and industrial facilities that uses the operators' existing water infrastructure. The targeted deluge solution can replace a traditional deluge system with the ability to target any fire with water, providing more control of the event, alleviating the issue of accidental discharge and allowing dual control of the system by both the Fire Rover agents as well as the operator.

For example, one of our latest industrial installations includes protection of a high-hazard plastic material that includes 56 thermal cameras and 27 nozzles and was approved by the local fire authorities as a replacement for the sprinkler requirement using a performance-based methodology.

Fire protection is moving from the “water, water, water” approach to early detection and fire elimination solutions for several reasons, the environment being just one huge benefit. Our partner WasTech was recently awarded an Innovative Product & Technology award from the Fire Protection Association Australia, the Australian equivalent of the National Fire Protection Association (NFPA), for bringing our innovative solution to the Australian market.

If you are attending the National Fire Protection Association’s (NFPA) conference in Boston, I will be presenting on the topic of “Remote Video Monitoring for Early Detection and Suppression on Tuesday, June 7 at 12 p.m. ET. If you are in town, come by and visit me at booth #1204.

Ryan Fogelman, JD/MBA, is vice president of strategic partnerships for Fire Rover.  He is focused on bringing innovative safety solutions to market, and two of his solutions have won the distinguished Edison Innovation Award for Industrial Safety and Consumer Products.  He has been compiling and publishing the “Reported Waste & Recycling Facility Fires In The US/CAN” since February 2016 and the “Waste & Recycling Facility Fires Annual Report.” Fogelman regularly speaks on the topic of the scope of fire problems facing the waste and recycling industries, detection solutions, proper fire planning, and early-stage fire risk mitigation.  Additionally, Fogelman is on the National Fire Protection Association’s Technical Committee for Hazard Materials.  (Connect with Ryan on LinkedIn at https://www.linkedin.com/in/ryanjayfogelman or email at [email protected]