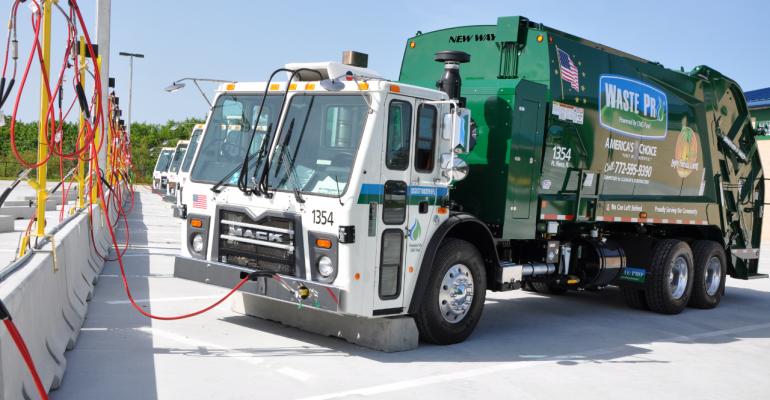 For Roxann Rodriguez, joining Waste Pro in 2020 was the best decision she made that year.

Roxann has been in the waste industry for more than 20 years, getting her start working for cities in different roles. When a job in solid waste opened up, she took it and earned her commercial driver’s license (CDL). However, as time when on, she realized it was time for a change; when she learned of an opportunity at the local Waste Pro division in Sarasota, she jumped on it.

“I’m very glad I chose Waste Pro. This is the first time I’ve actually felt somebody appreciate the hard work I put in every day,” she said. “It’s more personal in a private company.”

Roxann initially joined Waste Pro as a swing driver. She has experience operating all types of trucks, from roll-off to curotto and everything in between. She was promoted to route supervisor within just a few months. As route supervisor, she comes in early each morning to make sure all routes are covered and fill in as a driver if needed. She also likes to handle any customer issues personally.

“I like to address it face-to-face, to show that we care enough to come out there and work it out,” she said.

For Roxann, the most important thing about the job is simply getting it done. If someone is out sick or the Division is short-staffed, she doesn’t think twice about jumping in – a lesson she learned from her 10 years serving in the U.S. Army.

“Never leave a man behind,” she said. “That’s the mentality I brought with me. I will never ask someone to do something I wouldn’t do myself. I’ll be beside you, in the truck, wherever I’m needed.”

Driving trucks and mentoring the next generation are Roxann’s favorite aspects of the job. She enjoys riding with new hires and helping them prepare for road tests.

“It’s a great job,” she said. “You get to work outdoors most of the time, drive an awesome vehicle, and here in Sarasota you’ve got the beach and can feel the breeze coming off the water.”

It’s been a drastic change from her previous jobs in the industry. At Waste Pro, she says, things are more efficient, and everyone is willing to pitch in and do whatever it takes to get the job done.

“When my mom passed away, everyone here was with me every step of the way,” she said. “It’s times like that where a company really shows you who they are, whether you’re just another cog in the wheel or you’re family – they treated me like family, and I will never be able to repay them.”

In her spare time, Roxann enjoys spending time with her grandchildren.