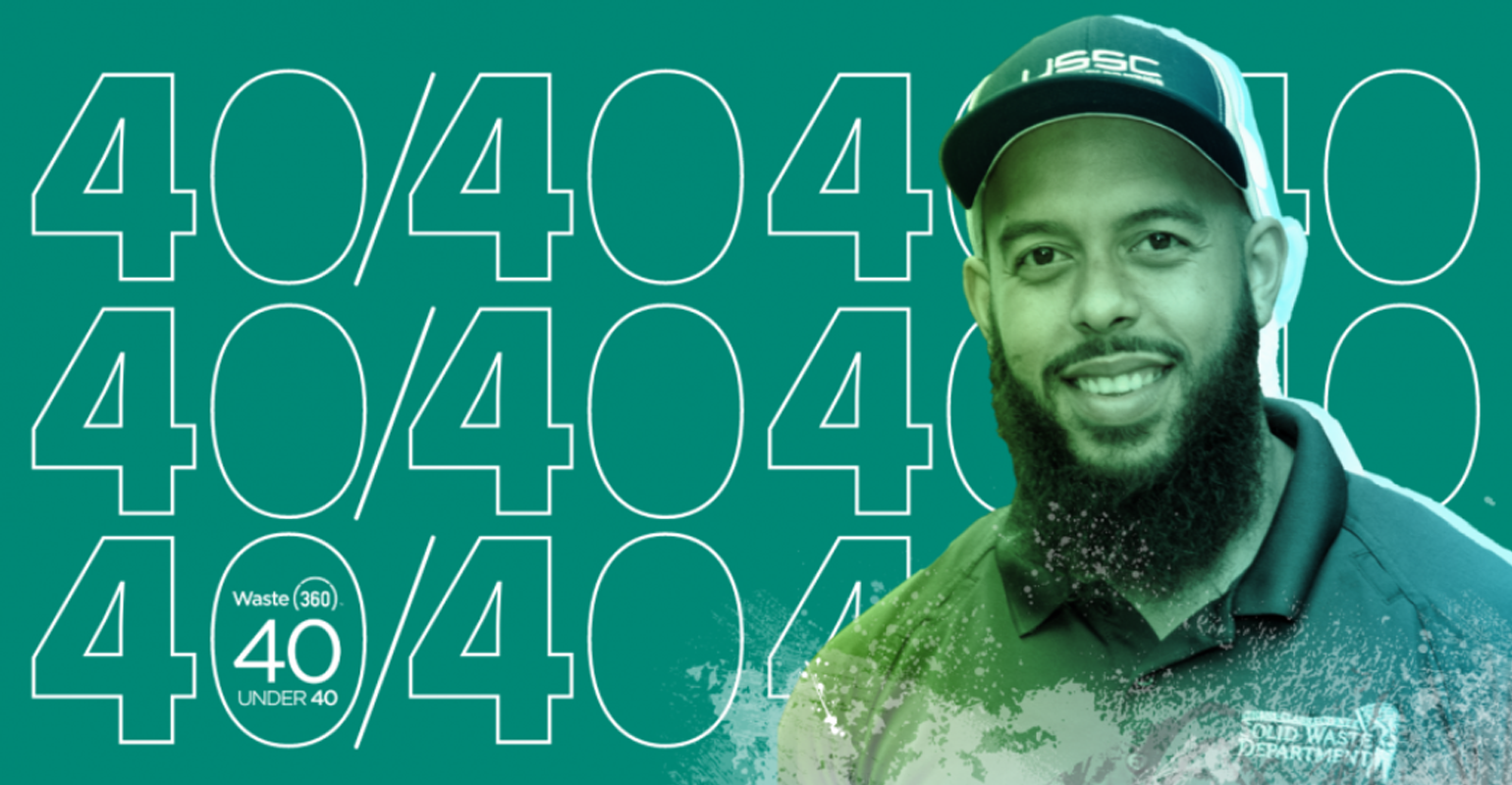 Korey Jones started in waste collection at 18, picking up trash cans and hanging on the back of a truck.

His father, who worked in the recycling division adjacent to the Athens-Clarke County Solid Waste Department, assisted him with getting a foot in the door.

"And just kind of took off from there," he says. "I did everything I was supposed to do. I pride myself on always doing the right thing and being a great worker and all that. So I ended up getting promoted four times. And Sue. And when did I make basically like four times in 12 years to my current spot."

More than two decades after his first day on the job, Jones is now the Solid Waste Collections Administrator, working on improving route efficiency and optimization.

The Waste360 40 Under 40 recipient discussed what values he keeps, his work with converting a fleet from semi-automatic to automatic and the role of technology in route assistance.

Waste360: What values have you carried throughout your career?

Jones: Integrity. Both my parents were in the Army. They didn't play and it was always "do the right thing," which is kind of that's how I live every day. I don't do anybody wrong. If I knew somebody dropped $20 on the floor, I'd give it back to them. I just I don't want that bad karma. So, I'm always doing the right thing. That's big; that's very big. My dad, he's no longer living. I'm always just trying to make him proud by going above and beyond, you know, helping people as best I can. Always trying to help and just be level headed. I don't really like confrontations. I just try to do the right thing and be a good human. He always said be an asset to society. Those were his words - be an asset to society and be a leader, not a follower.

Waste360: Tell me about the conversion at Athens-Clarke County from semi-automatic to automatic collection.

Jones: My previous boss, the one that hired me, was interested in automation. I was always interested in automation. But, of course, there's the older generation that didn't want change. They were used to driving a truck and having people on the back. So when I got promoted and got my CDL to become a driver, I was down to try anything. When there's new technology out there, I'm always down to sit down for a demo because some stuff is good, sometimes bad, but if you don't take the time to hear somebody out and see them demo, you never know what's up. So [my previous boss] would bring the automated truck here, and the first thing he would do is put me in it. I'd work with it a little bit, get a feel for it. But you know, as soon as we had that buy in, I could prove that it will work.

Rather than using one of the other older gentleman that would say, "Oh, this ain't gonna work," I'm saying, "we can get some routes done a little bit faster" and whatnot. That's how we kind of did this - just being open and willing to try new stuff. And then new technology man didn't know. And it's better than when you have two men on the back and they come in and are having a bad day and they're arguing. You can be on a truck by yourself and get your own route. You come in and worry about yourself, you clock in, you get on the truck and you go. Then you don't have to be outside and get rained on. You're in the comfort of your own truck and the arm is doing all the work.

Waste360: How did Samsara and technology help optimize routes?

Jones: It's been leaps and bounds. First of all, just tracking - you can see what your trucks are at. You can see if streets had been missed. You can see where your truck stands for dispatch. The diagnostics are something that we never had. If something happens to a truck driver and they have a problem, I can log in right there and say "you have a battery issue" or maybe "your gas is pretty low" or something like that. You can you can see that those types of things.

On the maintenance side, we've never really had a good maintenance program where you can log everything. You can log the work that you're doing. You can log stuff in one place where everybody can see it, and it's organized and is tied to the truck. And you can see the cost and day when it was done. It just brought us from four or five different programs to one program that did everything. We were able to consolidate all these different programs that we were paying for into one and it was just leaps and bounds better. We use it every day - hours on end every day. And this just made everything more efficient. That's the word. I love to be efficient, no matter what I'm doing.

Waste360: It looks like we're rebounding from this pandemic, what do you look forward to in the future?

Jones: The pandemic was real, real rough. We've actually done a great job. If you talk to other municipalities around the state of Georgia, a lot of them weren't able to provide the services. They didn't have enough workers. They didn't have enough trucks or whatever the case may be. And we never stopped service. Not even a day. We had problems. We were short many people. There was a two month stretch from MLK Day  to March 15 where I drove one of these automated trucks. I'm the superintendent and I drove it every day because we didn't have enough people. I would come in. I would run around. It would take me about five or six hours, and then I come back and answer emails and do my office stuff. That was hard. It was getting rough. I enjoy all aspects of solid waste, but it was rough having to run that route and then come still deal with other stuff, as far as administration type of things. But you know, we got it done. We're getting back to normal. But like I said, we didn't stop. And that was rough. Everybody was doing what they were supposed to do. And if you think you had COVID, you were out 10 days - that's 10 days. It just ravaged us and made it rough.