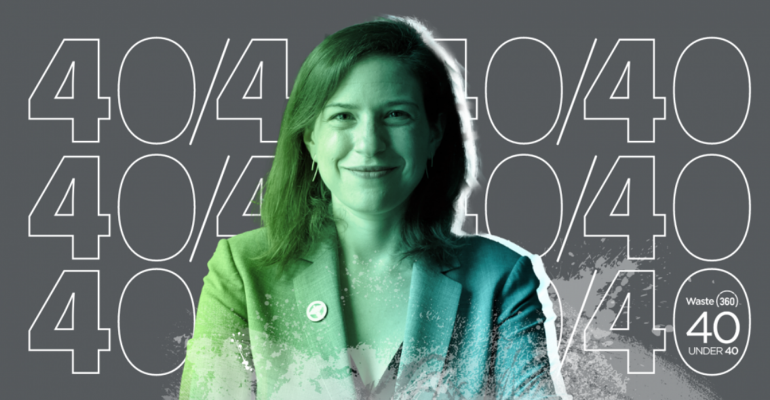 For Julie Raskin, environmental stewardship has always been a family affair.

The executive director of NYC's Sanitation Foundation recalls the influence her parents made on her as a child. They were "ahead of the times," traveling around Chicago to drop off recyclables.

'I was raised by civically engaged and environmentally aware parents to some degree," she says. "We didn't have curbside recycling program when I was a kid, it started later. I remember it was sort of a family outing to take the recyclables to the convenience store parking lot. They had like 10 or 11 bins, and it was sort of a fun activity. But we were definitely one of the only families I knew who did that."

Raskin's mother would send her on treasure hunts around the neighborhood to pick up litter. She was taught to value all items and be conscientious about waste.

The values that Raskin's parents instilled in the Waste360 40 Under 40 winner at a young age cemented her passion for a career in waste, beginning with pursuing an urban studies and environmental policy degree at Columbia University.

Following her arrival in New York City, Raskin began to get involved with local environmental organizations and participated in recycling and sustainability projects. She became a New York City Urban Fellow, which allowed her to work in city government. This set a path to public service in New York City.

One of Raskin's early projects within the Parks Department was creating a sustainability plan for large-scale public events. With more than 1,000 events at NYC parks in a given year, the environmental impact of these events can be extensive. Raskin began a recycling program for these events to reduce waste. She also gained experience in public-private partnerships with the implementation of Wi-Fi throughout the city.

"I found that was really a sweet spot for me of kind of sitting at the intersection of business and governance and harnessing, you know, whether it's financial resources or technical skills or expertise from the private sector to do something good for the public," Raskin explains. "And so that sort of set me on this course of like, 'Oh, I want to be that person that can really straddle those worlds and really bring those two groups together.'"

After securing an MBA, Raskin shifted from a variety of sales and marketing roles at American Express. However, her heart was still in waste. Two years ago, she discovered her current role at the Sanitation Foundation.

"This job opportunity came up that was like essentially a dream job for me to really build out this organization, the Sanitation Foundation, at the time that had a different name," Raskin says. "The entire goal of this nonprofit is to sit at the intersection of business and government and build partnerships that can help the city's zero waste goals. It felt like this kind of culmination of all of these things. It was a interesting journey to get here, and I'm really excited about it."

The Future of Waste

The Sanitation Foundation has a two-pronged mission, one that Raskin proudly displays on her sleeves. One aspect is helping NYC achieve its zero waste goals, and the other involves elevating and celebrating how sanitation workers are perceived.

"It's a workforce that doesn't often get recognized and is, at best, invisible," she says. "We come around to your house in the middle of the night or early in the morning and sweep your garbage away or take your recyclables."

The COVID-19 pandemic shifted how NYC residents viewed and treated waste industry workers who continued recycling and trash collection as essential workers. Without skipping a beat, the Sanitation Foundation quickly set up a COVID Relief Fund for workers.

"The city didn't have access to masks and sanitizer, and there was a lag to get all those resources," Raskin recalls.

Those very resources weren't far out of reach as companies shifted to producing personal protective equipment and supplies to aid in the slow of illness transmission. Alcohol producers donated hand sanitizers. The Sanitation Foundation also partnered with upcycle fashion designers to make reusable masks made from disgarded textiles. Restaurants donated meals as tokens of appreciation. Waste employees also were invited to showcase their own artwork as part of a special event.

The Sanitation Foundation also honored workers who lost their lives to COVID with the commission of a memorial sculpture.

"It was incredibly moving," Raskin says. "I'm very proud of that contribution that we made, not just to New York City sanitation workers, but speaking to the sanitation workforce nationwide that doesn't always get the kind of accolades that they deserve."

As her role evolves, Raskin admits that "there's a lot of work to be done" in terms of achieving zero waste to landfill. The Sanitation Foundation recently hosted its third NYC Food Waste Fair that brought together various stakeholders and residents to learn and trade resources to eliminate food waste. Topics on the plate for the 2021 Food Waste Fair included feeding more people, eating conscientiously, preventing climate change, saving and making money and being New York’s strongest. The event also included the launch of the Food Waste Toolkit.

"I feel very lucky to be in a job that I find very rewarding, and I feel like I'm making a tangible positive impact on the city," Raskin says. "I think my career goal is to be able to continue to find those sweet spots where I feel like I'm using my skillset and the ability to build partnerships to see how disparate entities can work together toward a common goal. I think that goal may evolve over time, but I think it's in my blood, or at least deep in my personality, to be very committed to serving New York City."