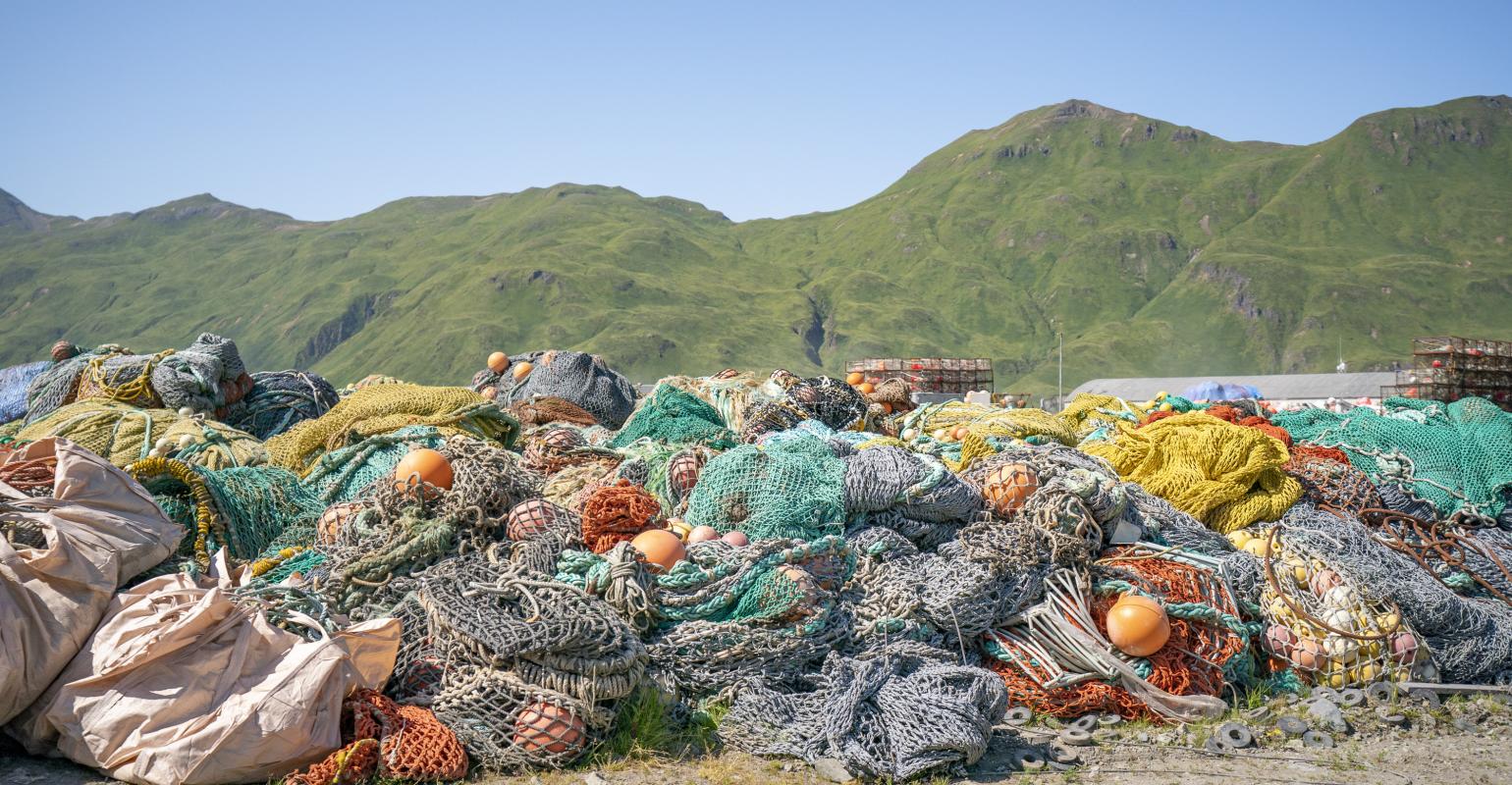 Nicole Baker had spent years on commercial fishing vessels, recording the number and species of fish caught to report to the federal government, which uses the data to inform managers at U.S. fisheries. While she still works as a fisheries scientist, Baker has taken up a night and weekend gig to address a big waste problem she learned of while on the job.

Baker had seen piles of old nets lying around in fishing ports that were either destined for landfills or sitting in storage because fishermen did not have good options to dispose of them.

“I had read an article about a nonprofit making sneakers out of old fishing gear, and it was a light bulb moment for me when I realized this gear is made of plastic,” says Baker. “I knew where nets were, from my experience as a fisheries observer. So I figured out who and where the specialized recyclers were. Then it was game on.”

The word “specialized” is key here. Fiber plastics are by definition a difficult material to recycle. Fishing nets and ropes, in particular, are composed of varied plastics in different combinations and different colors. Also, the material is often in disrepair, requiring special processing.

Baker launched a company called Net Your Problem to collect this spent, specialized gear and see that it is put to use. She started in the summer of 2017 and since has collected 880,000 pounds of material — and not just lines, nets, ropes, and floats that contain plastics. She salvages rubber and metal chains too. 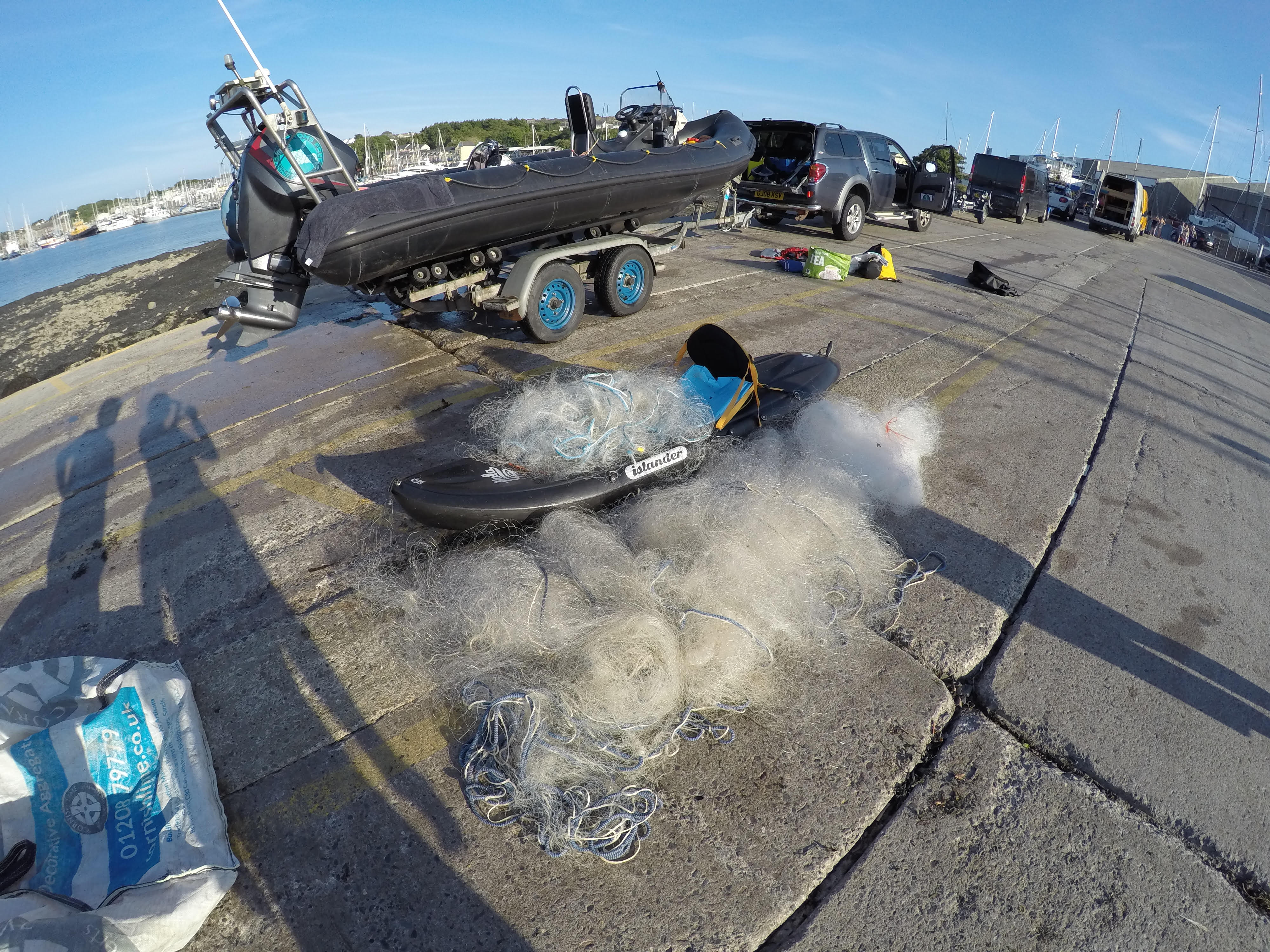 While Net Your Problem is based in Seattle, Baker and her small crew do most of their work in Alaska, traveling to ports and picking up old gear in fishermen’s storage piles. Sometimes they host drop-off or collection events at the beginning or end of the fishing season.

In addition to her staff, Baker works with two tribes of Native Americans who collect and prepare the material to send to recyclers in British Columbia and Denmark. She hopes to add recyclers in Europe and the Middle East that she has since learned about. These are the regions where she has identified recyclers who have set up shop to turn the materials into plastic granules or pellets. But she is looking for new ones worldwide.

In some cases, Net Your Problem and their tribal and other partners separate the material. Then it is loaded into containers in Alaska, shipped by ocean freight, offloaded at ports in British Columbia and Europe, and trucked to recyclers. 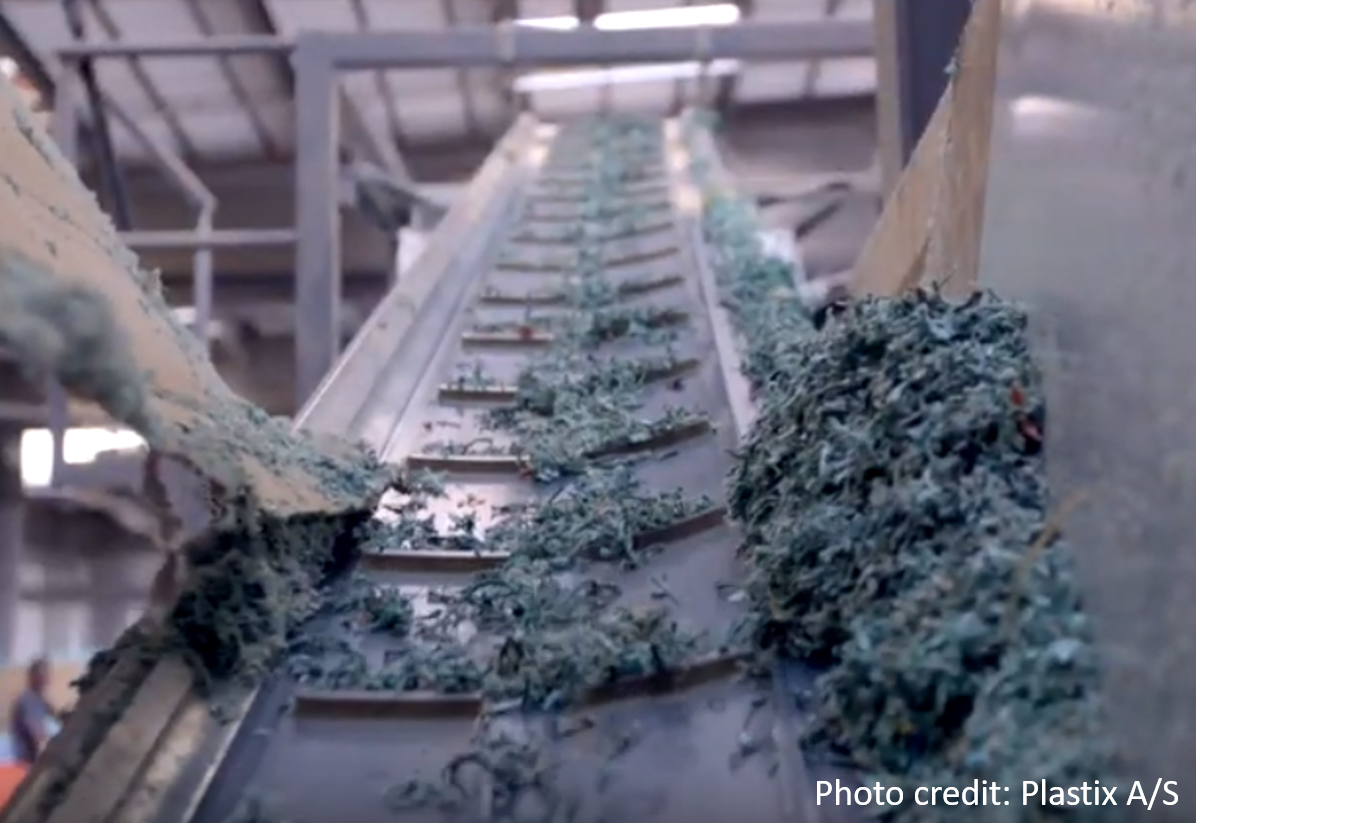 PLASTIX is one of the operations that Baker works with. The company developed a mechanical recycling facility in Lemvig, Denmark that converts used fibers from the maritime industry into virgin-like pellets. Fiber plastics such as fishing nets, trawls, and ropes are sourced from around the globe and delivered to PLASTIX’s plant.

“We inspect, sort, and fraction the post-use fishing gear, depending on the plastic type, color, and diameter,” says Hans Axel Kristensen, CEO of PLASTIX. “This can be a rather labor-intensive step, as the recyclability of fishing gear is currently not considered by the manufacturers nor users, and we often receive material that has to be separated, such as when a net made from one material has been repaired with another material.”

After the material is sorted, it is shredded, washed, separated, and dried. Then it is compounded and extruded into pellets.

Fishing gear received from Net Your Problem is processed with material from other suppliers — a total of 50 to 100 metric tons per week. 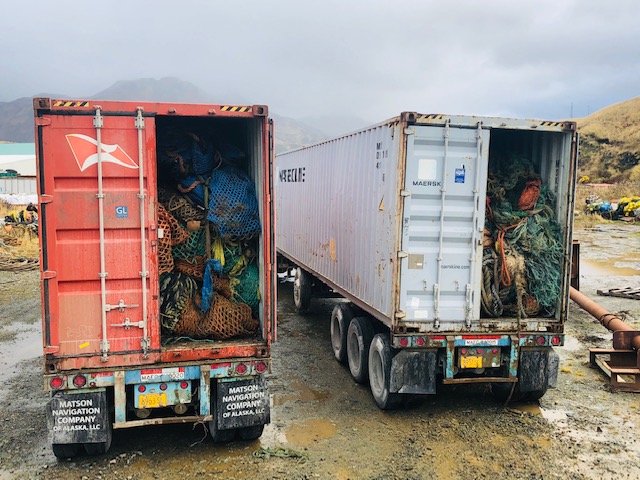 Customers use the pellets to make kayaks, mobile phone cases, and garden chairs, among other goods.

Kristensen describes his partnership with Net Your Problem as a mutually beneficial relationship among companies with a common mission.

“Both companies fight to prevent fishing gear from ending up in the ocean and environment,” says Kristensen. “Living in an interconnected world with transboundary problems such as ocean plastic waste, we especially value relationships with partners such as Net Your Problem. This represents the interconnection the world needs in order to deal with global waste management challenges.”

Rob Thompson, director of Odyssey Innovation in Tywardreath, U.K., started exploring the idea of recycling plastic on beaches five years ago. Based on his findings, Thompson estimates that the fishing industry generates about 70% of this waste, and a lot of it is fishing gear.

Thompson says he could find no one recycling nets in the whole of the U.K., so he started working to build infrastructure, bringing together several groups to help him collect polyethylene and nylon nets. These materials are collected from net makers, harbor masters, non-governmental organizations, and charities, among others. Thompson sends what has been recovered to PLASTIX to be recycled into pellets. Then he buys the pellets and uses them to manufacture products in collaboration with manufacturers.

One collection problem that had to be addressed early on was that many small harbors have limited storage. So Thompson set up centralized drop-off points across the Southwest U.K. for smaller quantities of nets to be gathered.

“There is quite a process to get all the material ready for recycling and sent to PLASTIX,” says Thompson. “In brief, we recommend that all items are cleaned, untangled, and stripped of rubber, polystyrene, and metal bits, along with any biofouling waste [organic debris]. Once processed into recycled plastic pellets, material is put in molds and fired, ultimately giving us our end products.” 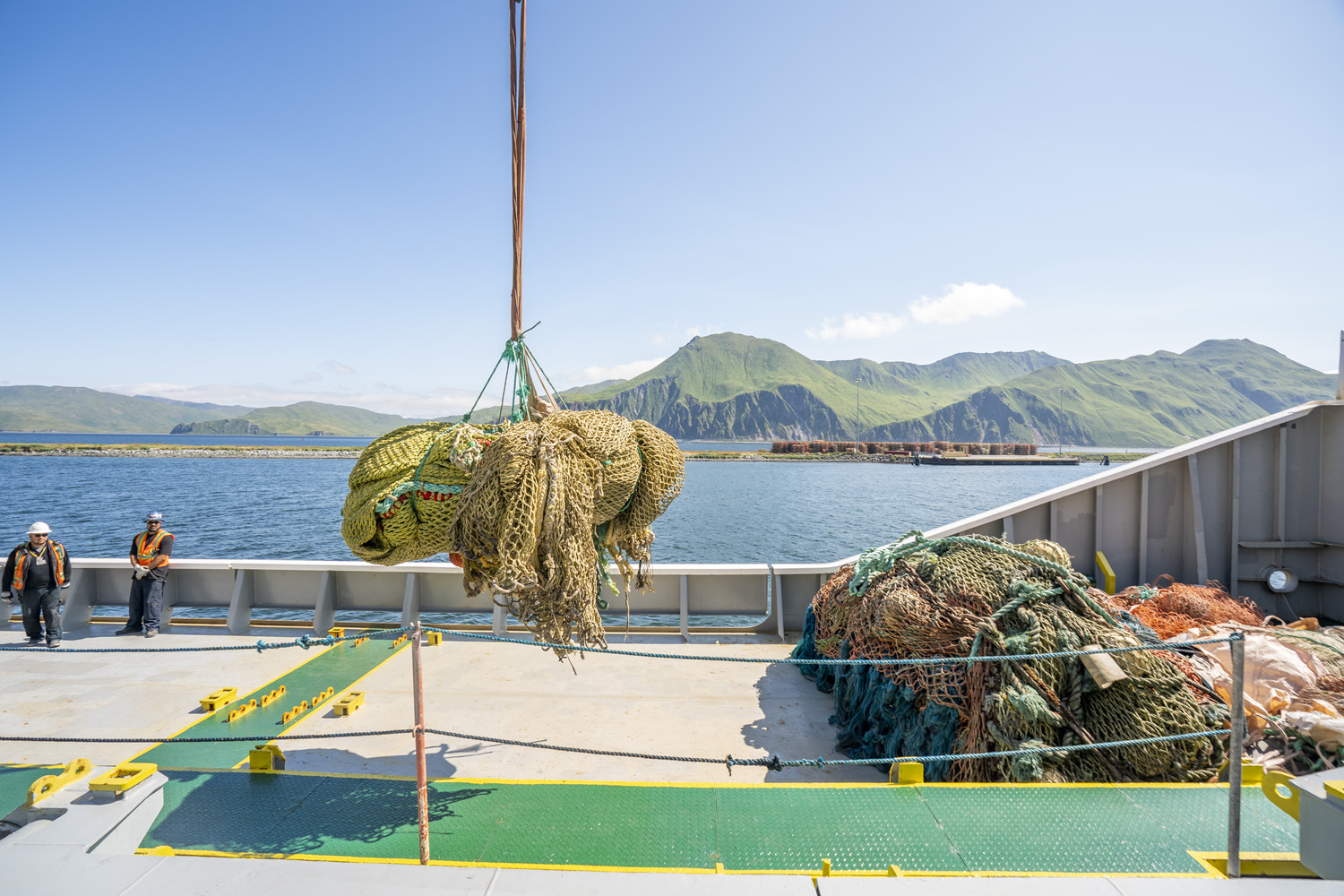 Odyssey’s work does not end after the spent gear is retrieved, or even after it has been recycled. Next, Thompson leverages products made from the netting — canoes and kayaks — to go out and collect more trash. This is done through Paddle for Plastic campaigns, in which community groups and individuals travel on these small craft to waterways and coastlines that would otherwise be inaccessible, and they clean up the remote locations. By now, Paddle for Plastic has gone global, supporting conservation efforts in Spain, Greece, the U.K., Africa, and North America.

Many of the kayaks are donated to community groups worldwide to assist them in their own Paddle for Plastic events. Thompson’s concept of making products from marine trash to recover more marine trash goes beyond the kayaks. He also has recycling bins made from old fishing gear that are used in beach cleaning projects.

“Now we are in the process of manufacturing surfing hand planes,” he says. “Far more items are in the pipeline, some awaiting further product development. Others are awaiting more funding opportunities to be manufactured and distributed. The best, however, is still to come.”