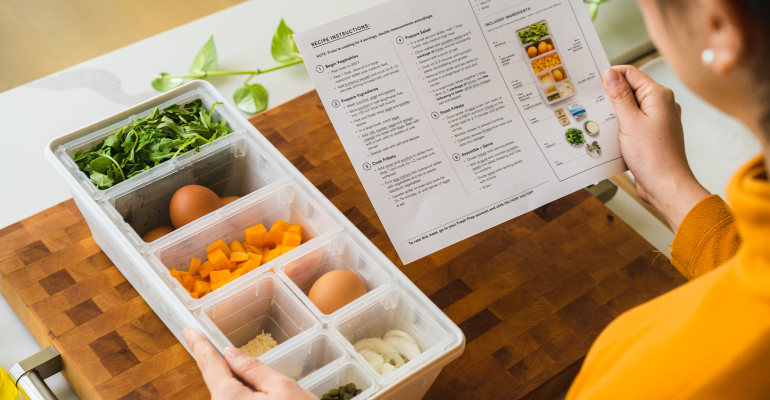 Fresh-food meal kits with their portioned sizes generate less food waste than traditional grocery store models; but the problem with most of these kits is the glut of packaging they create—an issue receiving plenty of attention as this food delivery model booms. In 2017, the U.S. meal kit industry was worth about $4.65 billion; by 2022, that figure will likely more than double, reports Statista.

Three friends since childhood launched a Vancouver-based company called Fresh Prep that has taken on this spent packaging dilemma; they make what they call Zero Waste Meal Kits. Recognized this year by Globe and Mail as one of Canada’s Top Growing Companies, the young business’s revenue spiked 540% from 2018 to 2020.

To curb the pileup the partners had to figure out how to sustainably make and ship kits with eight to 14 ingredients each that are individually packaged.

They came up with rigid plastic cups made of polypropylene that are configured for specific portion sizes; fit inside a tray also of polypropylene; and are delivered in an insulated cooler bag with ice packs. All the materials are picked up, cleaned, and returned to customers, most who subscribe to the service, for their next meal.

Rahemtulla, along with co-founders Dhruv Sood and Becky Brauer, are making a dent from their small corner of North America. If all of their  existing customers ordered zero waste kits each week, they would divert .85 tons of plastic waste per week, they say.

The initial goal was to make healthy eating more convenient, bypassing grocery stores, and simplifying meal planning and prep work; though they wanted for customers to be able to buy only the few tablespoons of peanut butter, pinch of parsley, or whatever type and amount of ingredients a recipe called for. But as they got going, they saw this other waste problem.

“We almost immediately recognized that packaging would be a massive issue, so serving what’s for dinner in a sustainable way became more important [in more ways]. As we focused on the product and on sustainability, we saw a lot of traction, and our goals got bigger,” Sood says.

So while they started out minimizing food waste by pre-chopping and portioning fresh vegetables and fresh herbs (most meal kit companies only portion dry ingredients) they fast began looking at ways to tackle packaging, which proved a lot tougher. It took two years to get it right, with a lot of design iterations and reiterations along the way.

“The biggest challenge was how do we package food safely without relying on single-use plastic. We tried mason jars, but they were not scalable. A lot of people would keep the jars, plus it’s not easy to ship in glass,” Rahemtulla says.

They experimented with Dollar-store coin envelopes, but food would leak from the corners. They diverted to single use plastics, determined this would be temporary as they worked to expand their business and resources.

“Once we had more funding, we hired an engineering team to design the Zero Waste Kit. They worked on a modular design, ultimately creating different sizes of reusable cups that can be adjusted based on recipe and still fit in the tray,” Rahemtulla reflects.

The tray design itself was the hardest part. They wanted to ensure that it had as few parts as possible to keep costs down and to easily manage the packaging.

They opted to go with a single lid that individually seals every cup inside the tray.

“This design is a challenge but not a big one if the tray and cups were standard. However, we have to accommodate over 500 recipes with different ingredients, weights, and volumes requiring a lot of configurations that needed to be sealed. It’s very hard to do with just one lid because the pressure on the seal changes as the configurations change,” Sood says.

“After two years of tinkering we had a seal that works, and now we are continuing to make adjustments to improve it and reduce the materials needed for the kit,” he says

The three friends launched Fresh Prep in their mid-20s with their lifesavings—$50,000—and a lot of drive.

“I’d worked in hotel management. Becky was an account manager, and Dhruv was in the finance field. But my dad and Dhruv’s and Becky’s families are entrepreneurial so [the urge to run a business] was already in our blood,” Rahemtulla says.

“But we didn’t just want to build a business to make a profit. We wanted to have purpose that addresses big challenges. We thought meal kit and then thought how can we improve on that kit,” he says of their B Corps-certified operation.

The friends and partners now have 400 employees to include a warehouse team, prep department, packaging department, and workers who combine packages based on customers’ orders.

But automation comes into play too in order to facilitate fulfillment and make the zero-waste system work.

The technology involves a conveyor, depositing machines, and integrations and smarts that tie in with software so the system knows what to deposit and in what proportion.

“This automation improves our throughput, allowing us to produce closer to delivery time and keep products fresher, and provides better visibility in dealing with missing or spoiled ingredients,” Sood says.

They figure the recipes are as integral to what’s made Fresh Prep work.

“We focused on making sure it was easy to prepare, 30 minutes or less, and having lots of variety in high-quality ingredients— meals that taste like restaurant quality,” Brauer says.

Everything is tested by the culinary team multiple times before making it onto the menu, though she says they learn a lot from customer feedback too.

And the customer response has been “overwhelmingly positive,” the partners say – that feedback is not just about the food, but the whole model.

“Everything is perfectly set up. You don’t have to use scissors to cut open packs. You just pour the portions.

Plus, people see waste they create with single-use plastics, insulation, and boxes. So, it’s not only annoying to deal with; it leaves many of them feeling guilty. But you just rinse the cups and tray; put them back in the cooler bag; and know they will be reused,” Rahemtulla says.