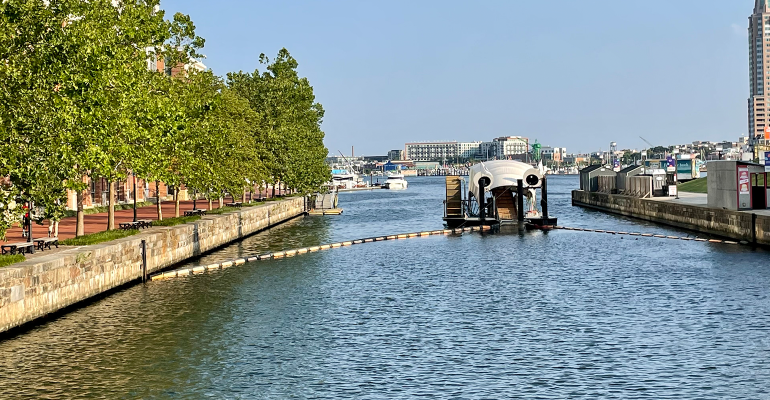 Seven years ago, Baltimore, Md. put a water-wheel powered system at the mouth of Jones Falls to scoop up garbage that would otherwise flow to the Baltimore Harbor and on to the Chesapeake Bay. Today Mr. Trash Wheel is joined by a family of three more similar “workers”; together they’ve pulled 1,600 tons of trash and debris from Baltimore waterways since 2014, with Mr. Trash Wheel the sole muscle behind the job for the first couple of years.

The newest addition, Gwynnda, which came online this month will snatch more trash than the three other wheels combined—about 300 tons a year. She’s focused on Gwynns Falls, considered one of the largest contributors to Baltimore Harbor’s trash load.

The wheels are the brainchildren of Clean Water Mills President and Baltimorean John Kellett who grew up on a farm and leveraged his knowledge of mechanical equipment to figure out how to pull trash from the water. He was bent on coming up with something based on what he’d seen over 20 years building boats, educating about the environment, and running the Baltimore Maritime Museum.

“In all of these positions, I was constantly confronted with the negative impact trash and debris was having on the water and Baltimore's beautiful Harbor. It was clear that the vast majority of it was coming from land sources and carried to the Harbor through streams and drains that brought runoff from storm events. Particularly, the large tributaries. It seemed that intercepting this trash at the mouth of the streams before it spread out in the Harbor would help stem the flow,” he says. 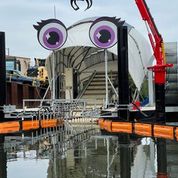 Kellett’s first idea was to build a “floating hay baler” of sorts to collect trash, and his concept evolved from there.

“I remembered an old machine we had on our farm that picked up hay from the field and put it on a wagon. It was powered by its own wheels. It occurred to me that the flow of the river that carries the trash could be used as a power source, and a waterwheel could harness this energy to collect that trash,” Kellett says.

He sketched his concept on a napkin at a party, went on to build a model, then secured funding for a prototype. In 2014, Mr. Trash Wheel took a dip into the water, soon followed by others, moored at the end of outfalls, with the current bringing trash to them.

The wheels are turned by the flow of the river and supplemented by solar-powered pumps. The rotation generates power for a rake system and conveyor that picks up trash that’s funneled to the machine by booms. It’s transferred to a huge dumpster on a separate barge. Once that dumpster is full a small boat is pushed to the machine, carrying an empty replacement.

The Maryland Port Administration and local sustainable energy company Constellation put up $800,000 for that first project. Maryland Port has gone on to fund the others, including its own known as Captain Trash Wheel, installed at its environmental education center, though the city and others have invested too.

The wheels are making a sizable dent, recovering as many as 30 to 75 tons of trash and debris during a particularly brutal storm, according to Adam Lindquist, director of Healthy Harbor Initiative, Waterfront Partnership of Baltimore. The Waterfront Partnership commissioned three of the wheels and has been key to keeping funding, private, and public interest going.

“Baltimore County’s annual investment in the trashwheel operation directly benefits our ongoing goal of reducing the volume of trash in the Gwynns Falls, in conjunction with our strategies to meet the Baltimore Harbor Trash TMDL (total maximum daily load) goal,” Olszewski says, adding more praise: the novel system is engaging not just environmentalists and water enthusiasts but the general public, he says.

That public interest piece has been a power horse in addressing Baltimore’s trash problems, with the attention-grabbing wheels adding some gust. The Waterfront Partnership saw this right after introducing the first wheel on YouTube. The video got over a million views in a weekend.

“It was clear that people were excited about the concept, and we thought, how do we build on this?” Lindquist says.

“We added googly eyes to Mr. Trash Wheel and gave him a Twitter account and a personality. He has the attitude we can solve this trash problem. We’ve got this.”

Locals went on to pour millions into the next wheel – Professor Trash Wheel –through crowdfunding.

Newcomer Gwynnda is moored at the mouth of Gwynns Falls, a 25-mile-long stream that empties into the Patapsco River, which drains into the Chesapeake Bay.

Gwynnda has intense purple eyes and a lot more solar panels than the others—72 of them across the top of her canopy. She needs that extra power burst as she does her work near a highway overpass that puts shade on her.

She also has assistance from a grapple arm that reaches into the river and removes bulky debris; a claw grabs trees from this forested space and moves them out of the way.

The environment where these four machines work is very harsh, particularly during floods. Keeping the system simple allows it to be rugged and reliable, resulting in almost no downtime, Kellett says.

Their simplicity also makes it easy for the public to grasp how they work and thus to get their support, which has proven important to groups like Lindquist’s as they do their job.

“The mission of the Partnership’s Healthy Harbor Initiative is to get people to appreciate the Harbor as an ecosystem that merits restoration and that is already full of life. We have had success, with the help of the trashwheels,” Lindquist says.

He punctuates with what came from recent work to educate both citizens and officials. In October 2020 Maryland became the first state to ban foam containers. The Partnership, who tracks tonnage and types of trash the wheels collect, used its data and photos to push for the ban, and continues to use its data to try and inform future policy and impact outcomes.

“We’ve seen an 80 percent reduction of foam we pick up from waterways since the ban took effect. A plastic bag ban just went into effect this month, and we are hoping to see similar reductions,” Lindquist says.

Appealing to the public, especially through marketing, has continued to be a key focus. Baltimorians and visitors buy trashwheel t-shirts and three craft beers, like hot-seller “Mr. Trash Wheel's Lost Python Ale,” named after Mr. Trash Wheel pulled a live ball python from the Harbor.

While Kellett launched Clearwater Mills to design and build that first trashwheel, he now also makes interceptors for smaller stormwater outfalls as well as floating wetlands that are used for water quality improvement and habitat restoration. Now he’s working on a wheel destined for Panama.

“When I first started this effort, I thought the biggest reward would be seeing a cleaner Harbor. However, it has been perhaps even more rewarding to see how it has engaged and educated people about the problem of plastic pollution and inspired many to become part of the solution. After all, the real answer to trash in our waterways is to not allow it to get there in the first place,” Kellett says.

“Our goal is to put the wheels on diets and, in time, put them completely out of business. Trashwheels treat symptoms of problems. But it’s legislation and behaviors that are what we need to solve them.”