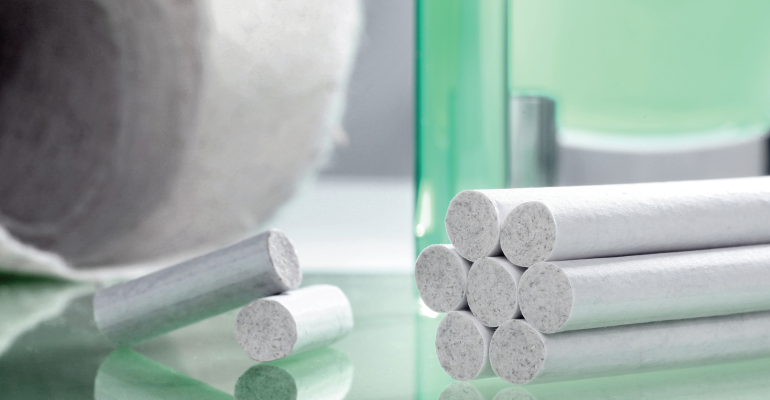 Cigarette filters (butts) are the most common litter worldwide,  with about 4.5 trillion of them ending up scattered across landscapes and floating in water bodies yearly, according to research in the British Medical Journal.  The butts are made of cellulose acetate; it’s a non-biodegradable plastic, but it eventually breaks down to microplastics, which leach toxic chemicals into the environment, killing birds and fish who mistake them for food, and potentially end up in the food chain.

There have been massive cleanup efforts around the globe, but mostly done locally by volunteers, and or at a cumulative expense of billions of dollars to cities and counties. Some regions have pushed for policy around cigarette litter; just this year, three U.S. states tried to move legislation to address the problem.  And the European Union is working to pass the costly clean-up tab onto tobacco manufacturers.

On a smaller scale, a California company called Greenbutts has set out on its own. It’s started making an acetate-free, compostable, biodegradable, and water-dispersible filter, hoping it will catch on among cigarette manufacturers. For now, it’s taking some creativity to get the product into smokers’ hands. Greenbutt’s story is interesting and continues to unfold.

“We wanted to see if we could find an alternative to cellulose acetate that has been used in cigarette filters for the past 60 years to hopefully help get rid of the cigarette butt blight,” says Tadas Lisauskas, president and co-founder of Greenbutts.

After many long years of research and development, he and co-founder Xavier Van Osten had a biodegradable filter made of fibers, including abaca, cotton and hemp, with no artificial ingredients or chemical residues. The filter degrades as compost in three days and breaks down in water in two minutes, while acetate filters linger on for about 15 years.

Lisauskas and Van Osten hold a patent for their innovation in the U.S. and U.K. and have a patent “pending” in Canada.

While the acetate-free product is commercializable, the tobacco industry is hesitant to adopt it, with big change and big money being its motivation, or lack of, according to Lisauskas.

One of the greatest hurdles, at least in the U.S., is getting Food and Drug Administration approval.

“For us it would cost millions and take about 10 years. That’s a huge barrier with no guarantee for approval in the end,” Lisauskas says.

To get a jumpstart he and Van Osten are going to unregulated markets, including hemp cigarette manufacturers and the marijuana industry.  Greenbutts has set this target not only to avoid regulatory hoops but, says Lisauskas, because “those industries’ consumers are more eco-conscious and want nothing to do with single-use plastics.”

Ontario, Canada-based 357 Tobacco is Greenbutt’s first retail customer, and it is also negotiating with a hemp cigarette manufacturing company in Richmond, VA and another in San Diego, Calif. who would manufacture and distribute the filters.

For now, as Greenbutts looks to scale through deals with individual brands, it is working with manufacturers who produce and distribute to multiple brands.

The product concept was born not much after Lisauskas and Van Osten, friends from years back, had gotten together. Lisauskas was in marketing for Telcom and Van Osten was an architect.

“We were on Xavier’s patio with a friend who was having a cigarette when the mailman came and delivered a wedding invitation that was embedded with wildflower seeds with a note on the bag to plant the invitation in a garden.

We thought it would be great if cigarette butts had flower sprouts coming out of them so you could sprout a flower instead of have them become litter,” says Lisauskas.

The alluring concept proved too complex, so they pivoted, figuring a biodegradable filter would have enough appeal to grab investors’ attention.

They made a prototype incorporating natural materials, stuffed them in a Pyrex tube that was the diameter of a cigarette, and attached a filterless cigarette to the tube to see if the smoke experience would be similar to that from a traditional cigarette. They managed to get the attention of Filtrona in the U.K.  that was then the largest independent cigarette filter manufacturer in the world.

The two entrepreneurs ended up hiring Filtrona’s head of new product development as their tech advisor. And they hired Nonwovens Innovation & Research Institute (NIRI) to design a filter substrate that was environmentally friendly and that would work on existing filter-making machines.

“After seven years we had a workable filter that had similar filtration properties and sensory properties (taste and feel),” says Lisauskas.

The Greenbutt partners are setting their sites beyond North America, including looking toward South America, which is proactively working to advance alternatives to single-use plastics. They are also looking toward Malaysia, Indonesia, Taiwan, and the Philippines, with their huge coastlines, and accompanying huge plastic problems.

“We have spoken to large tobacco companies in South America and in Indonesia. They have done testing of our product, so it’s a matter of logistically manufacturing in their countries and getting contracts,” says Lisauskas.

On the policy front, California’s recent SB 424 would have prohibited selling single-use tobacco products to include cigarette filters, electronic cigarettes, and vaporizer devices.  Manufacturers would have been required to set up take-back programs for reusable components and pay household hazardous waste facilities to collect and recycle reusable components designated as household hazardous waste. The bill passed the Senate floor and was to be heard in the Assembly Government Organization and Assembly Health Committees this year. But it was dropped as the legislature focused primarily on bills related to COVID-19.

New York and Maine also pursued cigarette litter legislation this past session. New York’s bill (A 7259) is being reviewed by the Senate, according to the Senate’s website.

Maine’s bill was signed into law in March 2018; but it simply amended the definition of "litter" to include waste resulting from or associated with tobacco products, including cigarette butts.

And New Mexico has considered regulation around tobacco litter.

In the U.K., environmental charity Keep Britain Tidy is bringing attention to what Richard McIlwain, deputy chief executive of Keep Britain Tidy, finds disturbing.  The nonprofit’s 2019 survey found that of over 75,000 individual items of litter strewn over 3,000 sites, two-thirds of them were cigarette butts.

“As a persistent, single-use plastic, which is also toxic, this presents us with a major environment problem, and one that far too many smokers are unfamiliar with … people rarely bat an eyelid [when dropping a cigarette butt]; yet one used butt soaked in a litre of water has been shown to be toxic to fish. And work at the U.K.’s Anglia Ruskin University has demonstrated that used butts retard plant growth and germination success,” says McIlwain.

He goes on to say, that while other industries accept they have a major role in preventing their products from polluting the environment, “the cigarette industry has studiously sat on its hands and done next to nothing.”

However, policymakers are starting to tune in to the problem. The European Union’s Single-Use Plastics Directive specifically requires that the tobacco industry pay for collection, transport, and treatment of used butts, as well as for clean-up, by 2025.  This directive will not be applicable within U.K. law, but the government has committed to meeting its intended ambition.

Keep Britain Tidy is currently in dialogue with the industry about a voluntary plan to address the issues.

Meanwhile, Canada has done well with a voluntary program to tackle the 8,000 metric tons of cigarette butts that litter its landscape each year. Volunteers collected 560,432 cigarette butts from Canadian shorelines in 2018 alone.

As reported in Globe Newswire, speaking of plastic pollution, Kate Le Souef, national program manager at the Great Canadian Shoreline Cleanup says, “Whether in the form of cigarette butts or bottle caps, the growing rate of plastic in our waters is alarming.”

Narrowing in on cigarette butts, Le Souef went on speak of their harmful effects on marine life. “We hope to continue raising awareness on the growing pollution crisis and inspire positive action to protect the health of our waters,” she says.