On the Way to Zero Waste (Part One)

In a two-part series this week, Waste360 takes a look at zero waste and some of the actions industry professionals are taking to achieve zero waste. Read part two here.

“Zero waste” has become a common phrase in the solid waste management space. Still, not everyone agrees on exactly what it is, or how to get there.

Further, as the zero waste movement gains traction, so do various waste-to-energy (WTE) technologies. So, without definitions and terms accepted by everyone, it’s hard to definitively determine if “zero waste” and “waste-to-energy” can co-exist.

But a growing number of stakeholders who call themselves zero waste advocates rely on a peer-reviewed definition of the Zero Waste International Alliance (ZWIA). The nonprofit established global standards to guide the development of zero waste initiatives. Its definition is a bit long but basically calls zero waste a goal to guide people in changing their practices to cut waste and to design all materials to continually be used, ultimately eliminating waste and its toxicity.

ZWIA’s zero waste hierarchy, in short form from top to bottom, is reduce, reuse, recycle, energy recovery and landfill. High-temperature conversion systems like incineration, gasification and pyrolysis don’t count as energy recovery. Compost and anaerobic digestion fit into the model, but that’s where the organization draws the line. 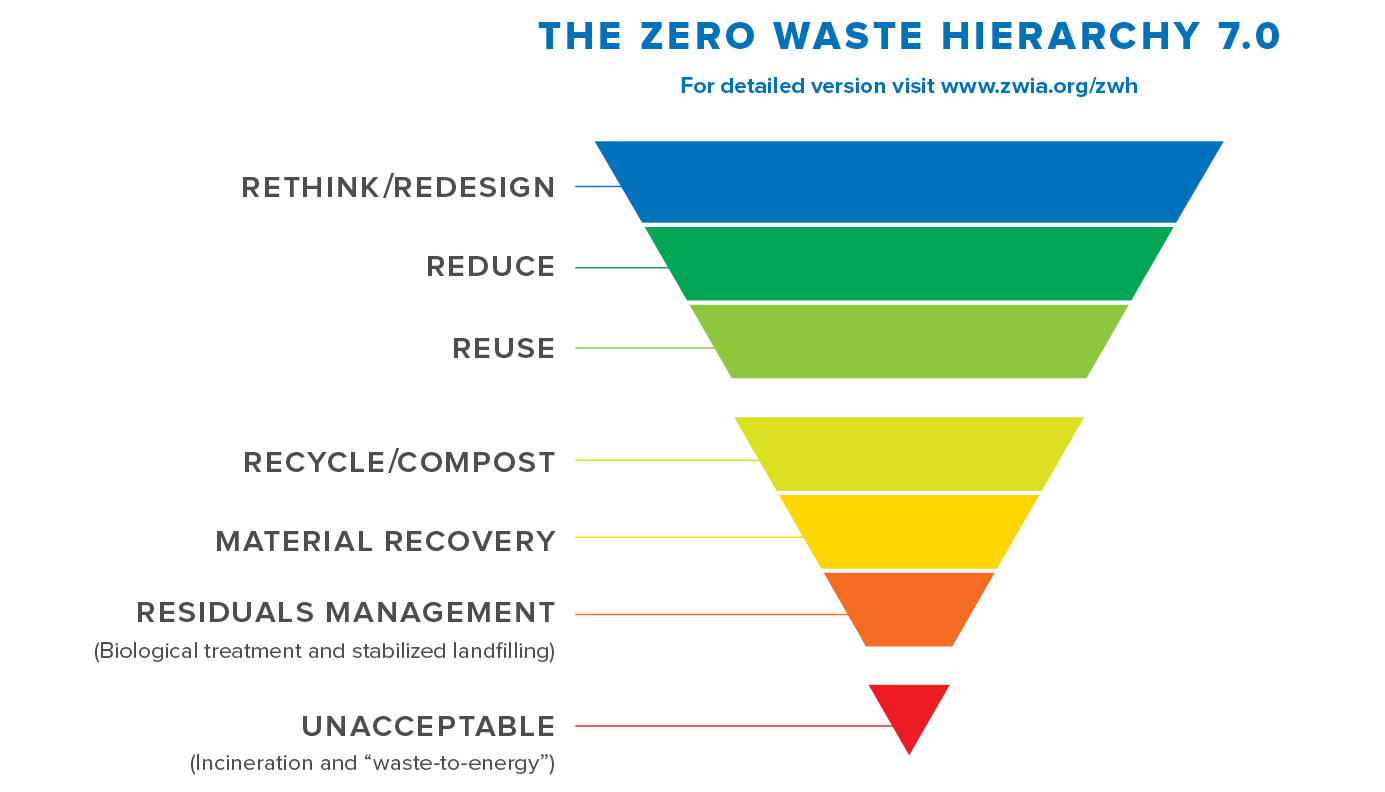 Dan Matsch, director of compost and the center for hard to recycle materials for Boulder, Colo.-based Eco-Cycle, believes conversion technologies are counterintuitive to zero waste efforts.

“I hear waste-to-energy technologies will solve problems that recycling can’t,” says Matsch. “The challenge is these facilities cost a lot to get to scale, and you need feedstock to power them.”

“These plants are designed for the amount of waste generated today, but five years from now, if there is less waste, the party that signs the contract is obliged to find more material,” he adds. “It’s inevitably a put or pay contract that runs contrary to increasing diversion and recycling. What can potentially happen is recyclable stuff will go [to WTE].”

Matsch thinks most recyclers have the same perspective—that WTE processes do not put valuable materials to their highest and best use.

“The idea is to preserve natural resources,” he explains. “When you are burning [or using high heat] to turn those resources into energy, you’ve lost them, even if it’s for renewable energy.”

Why do anaerobic digestion (AD) and composting get approval from “zero wasters?”

With AD, the reasoning is that this process extracts a certain amount of energy from digested waste but utilizes the remaining organic matter.

“[Anaerobic digestion] can be beneficial in that once you have drawn the energy to make methane, you still have digestate you can use as fertilizer or compost feedstock,” says Matsch.

“Dealing with organic stuff in the bin is where anaerobic digestion best fits in the zero waste hierarchy,” says Ewall. “But source-separated organics should go to aerobic composting first if you have that option. You don’t want to go to anaerobic digestion and form methane if you don’t need to because digesters have some methane that leaks and contributes to global warming.”

Michael Thoreaux, vice president of JDMT, a Cheyenne Wyo.-based environmental and engineering consulting firm, invests in systems leveraging waste to make renewable energy and fuels. He points to different takes on what systems might fit in with zero waste. Whether there’s a fit basically depends on how you define energy recovery, he says.

“Both the European Union and the U.S. Environmental Protection Agency’s waste management hierarchies also focus on highest and best use (as does ZWIA’s hierarchy), moving from reduce to reuse to recycle. Below that line is the concept of recovering and converting materials, which fits between recycling and disposal,” he says. “This line, just above disposal, is where the confusion and contention are.”

“If you take something apart that’s no longer used in order to make something else, you are converting it to make commodities,” ADDS Thoreaux. “But when you convert, can you recover molecules that something was made from? Some would say if you convert molecules into energy that this is a form of recovery for best use.”

One example Thoreaux points to is a process involving vaporizing waste plastic and distilling that vapor into its molecular components to recover compounds to make fuels and other commodities.

He says how “clean” many of the technologies are depends largely on how efficiently the process is done.

So, how do you determine highest and best use? What counts as clean, sustainable energy conversion? And are these approaches fair game on the way to zero waste?

It depends on who’s asked the questions, though it seems environmentalists and a lot of recyclers believe that not many WTE technologies fit into the scheme.