Waste Today, Beer Tomorrow: The Story of a Sustainable Brew 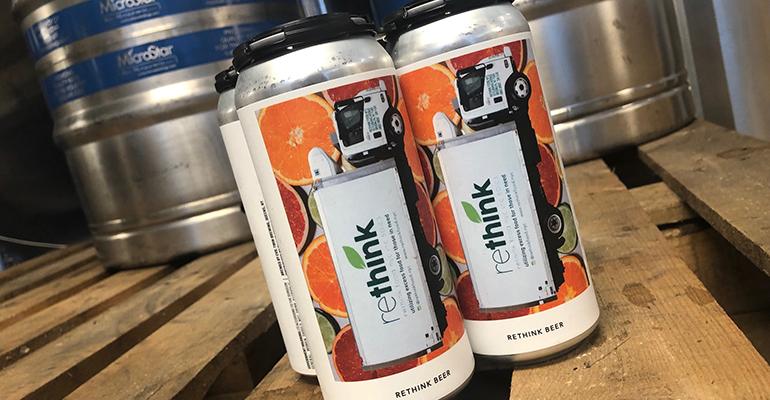 What happens when a brewery, hotel bar and nonprofit get together? It sounds like the start to a joke that could go several different ways, but one collaborative effort in particular pulled in resources to repurpose what would have been food waste and transformed those scraps into a limited-edition, citrusy beer.

Brooklyn, N.Y.-based nonprofit Rethink Food NYC and Evil Twin Brewing New York City partnered to create a beer made entirely from repurposed grain and citrus rinds. The citrus sour pale ale—made from spent grains and unused cocktail ingredients—was released the weekend of April 12 and is being distributed throughout various locations in the city, while supplies last. Unused citrus rinds, such as orange and lemon peels, were collected from The NoMad Bar in Manhattan and used in the brew.

“We never make small beers. This is the only one we’ve ever done,” explains Evil Twin Brewing New York City Founder Jeppe Jarnit-Bjergsø. “It’s a cool story to tell—that this is made from what would have been waste.”

The beer was brewed in Evil Twin’s new location in Brooklyn, which was recently toured by Waste360 staff. It was made using grains that would have normally been tossed or sent to a farmer as animal feed, as well as citrus rinds that would have been thrown away from The NoMad.

“The whole concept with this is in line with what The NoMad does with Rethink—taking food that would normally go to waste and creating meals to feed people. We took grains that we normally would not use to make beer,” says Jarnit-Bjergsø. “It is a perfect concept and method. And it’s fun. It challenged us as brewers—to do something like this is a challenge to see what we can get out of it.”

The beer is available both on draft and in cans, which are outfitted with a unique label design. The label includes a photograph of ReThink Food NYC’s truck that collects excess food around the city, as well as a colorful backdrop photo of the citrus used in the beer.

Proceeds from the beer sales will go toward Rethink Food NYC, which repurposes excess food from restaurants into new meals for hungry New Yorkers.

In addition to the work Rethink does, Sarah Munger, director of operations for Rethink Food NYC, explains that the goal is to challenge breweries and anyone who works in the food and beverage industry to think about how they can reduce excess food and create something with it.

“We want everyone in the food and beverage industry to really think about how they can turn this excess into something useful rather than letting it go to waste because it doesn’t have to be waste,” emphasizes Munger. “We think of it more as surplus or excess rather than calling it waste because it’s only waste when you throw it out, and it’s really thinking about what you consider to be waste.”

And though this beer was sort of an experiment for Evil Twin, Jarnit-Bjergsø was pleased with the end result.

“The beer came out very refreshing with a distinct but well-balanced citrusy note,” he said in a statement. “Honestly, the perfect beer for the warmer weather we have coming.”

Are you thirsty yet? Flip through this gallery to view a selection of snapshots from Evil Twin Brewery New York City’s new location, which will soon include a greenhouse tap room that’s slated to open later this summer.