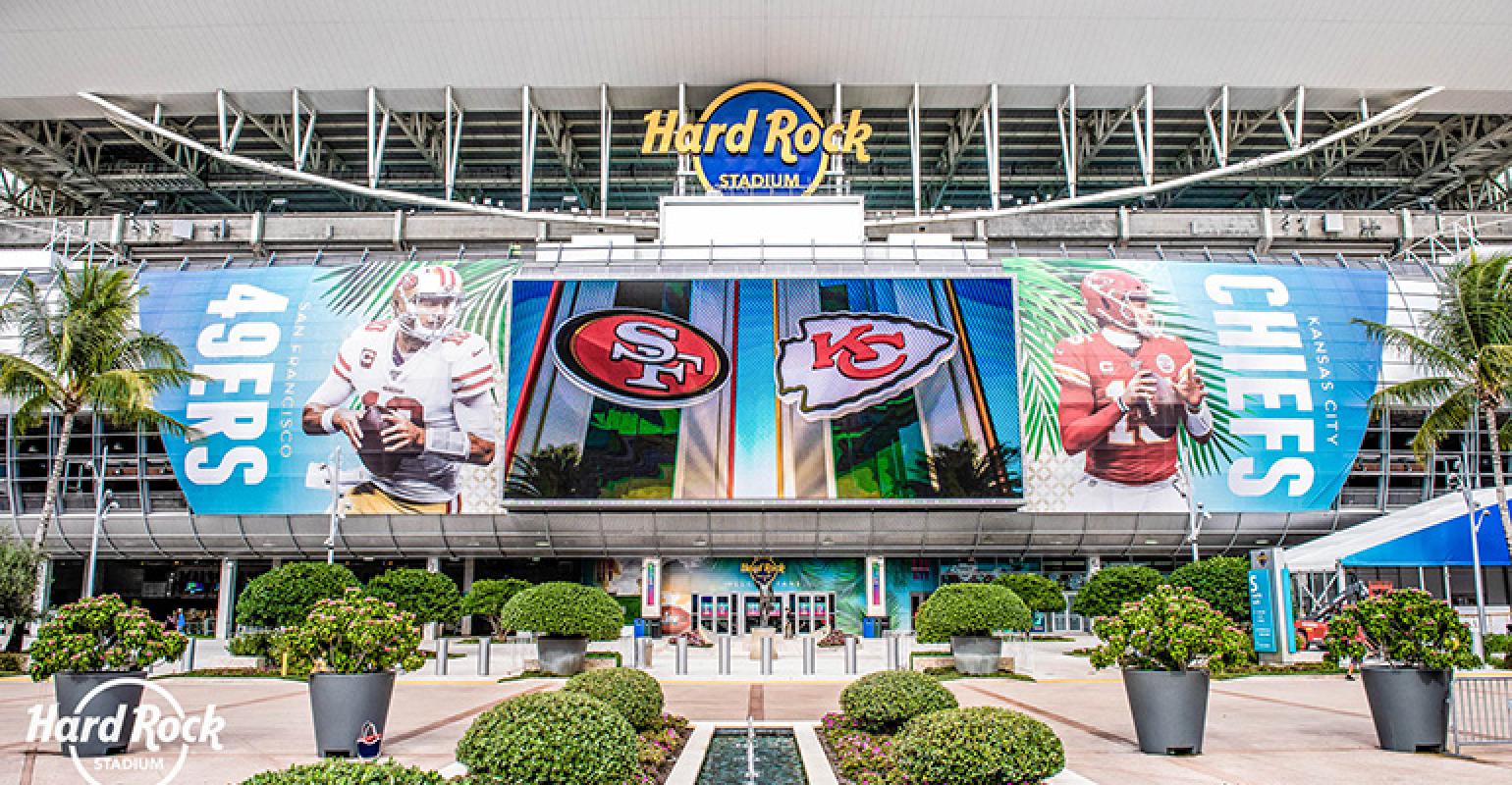 Various companies are partnering to reduce waste and promote sustainability ahead of Super Bowl LIV in Miami this weekend. Here’s a look at what PepsiCo, Centerplate, Ball, Bud Light and Food Rescue US are doing for this year’s big game.

PepsiCo and Ocean Conservancy announced, in the lead up to Super Bowl LIV in Miami, plans to partner on a series of beach cleanups around the United States. The first cleanup will be held at Oleta River State Park in Florida on Saturday, February 1, with singer Ally Brooke and country music duo LOCASH.

"We need all hands on deck to tackle ocean plastic pollution, and we are thrilled to have PepsiCo join Team Ocean and help engage more people and volunteers in the fight," said Janis Searles Jones, CEO of Ocean Conservancy, in a statement. "Plastic pollution is one of the most visceral and visual threats facing the ocean, and we know from three decades of mobilizing the International Coastal Cleanup that nothing changes hearts and minds like coming face-to-face with the issue at a beach cleanup. Our hope is that we can leverage PepsiCo's incredible reach to make real change."

"At PepsiCo, we envision a world where plastic never becomes waste, and that requires both urgent action and collaboration," said Simon Lowden, chief sustainability officer at PepsiCo, in a statement. "As one of the world's leading food and beverage companies, we recognize the responsibility we have to be part of the solution, and partnering with Ocean Conservancy is an exciting opportunity to drive progress in these communities and beyond."

Hundreds of recycling bins have been placed throughout Miami, and the PepsiCo Recycling Roadster will be in town to inform people about the importance of recycling.

In addition, through the PepsiCo Foundation, PepsiCo has been active in supporting Ocean Conservancy's work through Circulate Capital, an investment firm solely dedicated to financing plastic waste collection and recycling projects in parts of the world most impacted by the ocean plastic crisis. The series of cleanups is an opportunity to bring this behind-the-scenes work to the forefront and engage the public in ocean conservation.

Ocean Conservancy is the official Ocean Partner of the Miami Super Bowl Host Committee and its Ocean to Everglades (O2E) initiative, and in September 2019 launched the #SuperCleanupChallenge to divert or remove 54 tons of plastic and other trash from Florida-area beaches in the lead up to the big game. Saturday's cleanup efforts will go toward the 54-ton tally, and 50 local consumers will collect litter alongside Ally Brooke, LOCASH, employees, government officials and other special guests.

"I'm so excited to be a part of #TeamOcean and to be joining PepsiCo and Ocean Conservancy to help leave Florida a little cleaner than when I arrived," said Ally Brooke in a statement. "I've learned that everyone has a role to play in the fight against ocean plastics and encourage all my fans to learn more at jointeamocean.org."

Ball, a leader in cutting-edge, sustainable aluminum beverage packaging, designed the lightweight aluminum cups in response to growing consumer preference for more sustainable products. Centerplate, the exclusive catering partner for Hard Rock Stadium, is adopting the cups as part of the company’s Better Tomorrow 2025 goals and to help forward the venue’s broader mission to phase out 99.4 percent of single-use plastics this year.

As the NFL’s official beer and the presenting sponsor of the Super Bowl LIV cups, Bud Light is also doing its part to make a Better World and support Anheuser-Busch’s ambitious 2025 sustainability goals. As a result, the aluminum cups will help eliminate more than 500,000 plastic cups annually from Hard Rock Stadium’s supply chain. 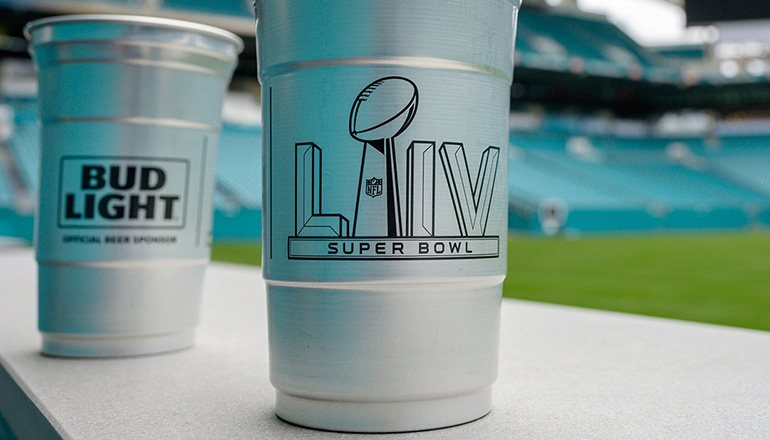 “We’re proud to team up with Centerplate and Bud Light to bring fans at Hard Rock Stadium improved, sustainable hospitality with our game-changing and infinitely recyclable aluminum cup,” said John A. Hayes, Ball’s chairman, president and CEO, in a statement. “We developed the aluminum cup to ensure it meets growing demand for more green products, and we’re excited that our partnership will give this year’s Super Bowl fans the opportunity to do better by the environment.”

“We’re excited to be working with likeminded partners to put sustainable solutions in the hands of football fans on this amazing stage,” said Adam Warrington, vice president of Better World at Anheuser-Busch, in a statement. “Bud Light has a storied history of celebrating NFL moments, and we hope this will be the first of many occasions they can enjoy it from an infinitely recyclable cup.”

During the Super Bowl, 50,000 of the 20-ounce cups will be available in the clubs, suites and general concourse areas of the stadium. After the game, the cups will continue to be available at Hard Rock Stadium throughout the year for Miami Dolphins games, University of Miami college football games, international soccer matches, concerts and all other events that take place at the global entertainment destination. Hard Rock Stadium became the first professional football arena to feature the aluminum cups at scale when it debuted them during the Miami Dolphins’ final home game of the season in December 2019.

“We are always striving to be leaders in providing innovative solutions for our clients and guests, especially in support of our mission, vision and values,” added Centerplate CEO Steve Pangburn. “This is another example of a forward-looking enhancement that will help us reduce our environmental impact in the months and years ahead, not only in Miami but in support of our global mission to make it better to be there in the communities which we serve.”

Food Rescue US Teams Up with Centerplate and NFL Green

With more than a million people expected to attend Super Bowl LIV at Hard Rock Stadium and its related events, national food recovery leader Food Rescue US is partnering with NFL Green and Centerplate to ensure surplus food from Super Bowl events is recovered and provided to food insecure individuals in the Miami area. Tens of thousands of pounds of food are expected to be rescued from these events to keep it from ending up in landfill where it creates methane gas that contributes to global warming.

“With the scale of an event like the Super Bowl, we always prepare plenty of food, and I’m pleased to continue our partnership with Food Rescue US – Miami to deliver any surplus to local social service agencies feeding the hungry in our community,” said Chef Dayanny de la Cruz, executive chef of Centerplate at Hard Rock Stadium, in a statement. “Our Centerplate team is proud to give back to the communities we serve and to ensure that the meals we create can also support those in need, thanks to the efforts of the volunteer food rescue teams.”

Over the past year, Food Rescue US – Miami has provided 250,000 meals and kept 300,000 pounds of food from landfill under the leadership of Site Director Ellen Bowen. Food rescued from Super Bowl LIV and related events will be delivered to Miami Rescue Mission, Broward Outreach Center, Broward Partnership for the Homeless, Lotus House Shelter and Camillus House.

“We know food insecurity impacts one in seven people in the state of Florida,” said Carol Shattuck, CEO of Food Rescue US, in a statement. “Through our work with Centerplate and NFL Green, we can make sure excess food from Hard Rock Stadium and the Miami Beach Convention Center helps to feed individuals and families throughout Miami, while also not contributing to the growing food waste crisis in the U.S.”