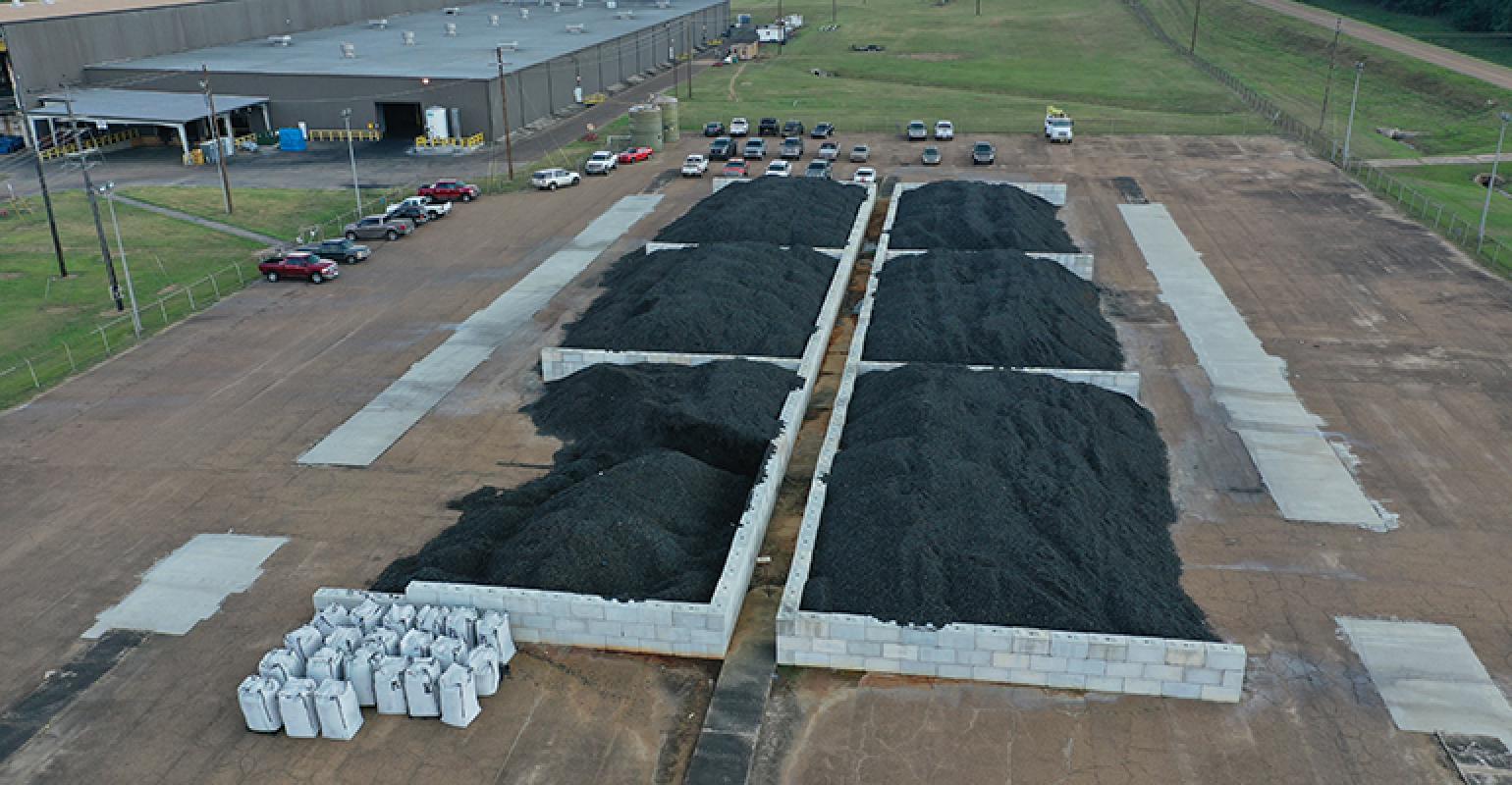 Part two of a three-part series this week looks at how Bridgestone Americas aims to reach its goals to reduce emissions and use 100 percent sustainable materials.

Bridgestone Americas is deeply involved in a project that’s new to its industry. It’s engaging in a large-scale recycling venture leveraging a somewhat unique thermal process to be able to obtain more of a high-demand material to incorporate in its products.

At the same time, the project, a partnership with Delta-Energy Group, will bring Bridgestone closer to two goals it has set for 2050: using 100 percent sustainable materials and reducing CO2 emissions by more than 50 percent. Key to nearing these objectives has been incorporating carbon black recovered from recycled tires into new ones through Delta-Energy’s patented process.

Carbon black, the byproduct of oxidized petroleum used to reinforce tire rubber, has been a sought-out commodity for years. But there’s only so much to go around, plus the virgin material, sourced from petroleum, is not “green,” while recovered carbon black has lower CO2 emissions.

Bridgestone is ramping up consumption of this sustainable material. In 2019, it launched its first product using approximately 200 metric tons of recovered carbon black, which is equivalent to about 70,000 end-of-life tires. By the end of 2020, the plan is to bump up usage to 6,800 metric tons.

“That is the equivalent of about 2 million recycled passenger tires, and this will have a big impact on CO2 emissions, as the reactors emit about 81 percent less CO2 per ton versus the process to extract virgin carbon black,” says Jon Kimpel, executive director of new mobility solution engineering for Bridgestone Americas. 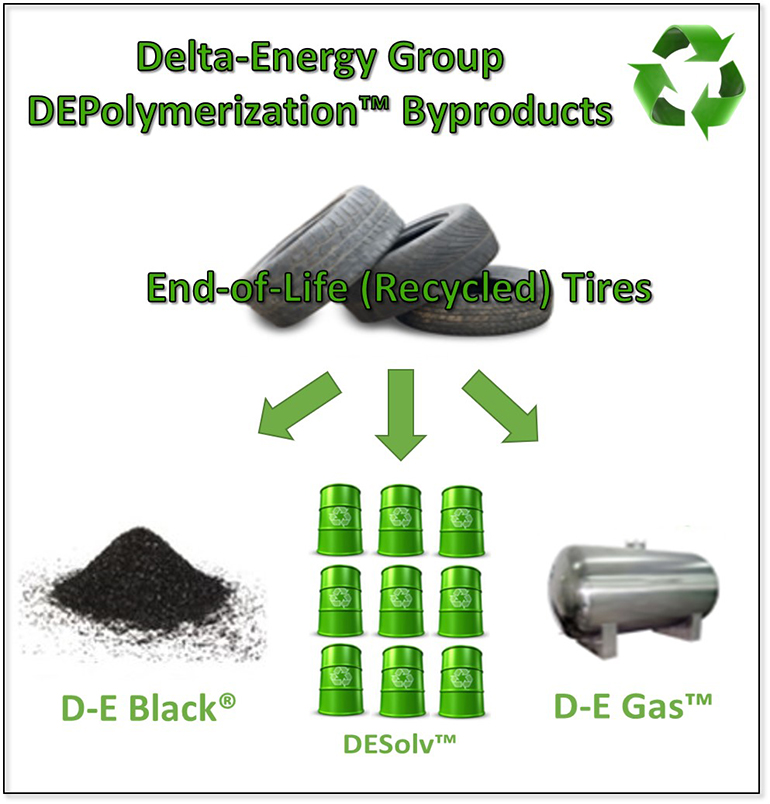 Delta-Energy’s recipe is a proprietary depolymerization process, a version of pyrolysis that’s distinguished from similar technologies by the addition of a catalyst to reduce energy requirements. It allows operation at lower temperatures than typical pyrolysis. So, not only is it a cleaner process, but due to the lower temperatures, the material maintains its integrity as a reinforcer. And though it’s not the same exact structure as virgin carbon black, it performs similarly, while other technologies that Bridgestone explored did not meet the same performance criteria.

“We’d seen other technologies try and do the same as what this process achieves, but the structure of the carbon black was not up to our quality standards, and from a reinforcement standpoint, we needed a sound structure,” says Kimpel.

Further, the recovered carbon black from Delta-Energy’s process enabled the material to be used in more places in the tire, mainly sidewalls and inner liners. The amount used ranges from 20 to 30 percent.

“So, we were excited enough [about the applications and performance] to become both an investor and customer,” says Kimpel. Bridgestone uses the material and has an equity share in Delta-Energy.

Jamie McNutt, technical fellow of product development at Bridgestone Americas, views the corporation she works for as being ahead of a curve that the whole industry will need to navigate, explaining that as more tire manufacturers come to the U.S., the demand for carbon black will only grow.

“One reason we are being proactive is to encourage other companies to purchase the material and also look at other ways to recycle tires,” says McNutt. 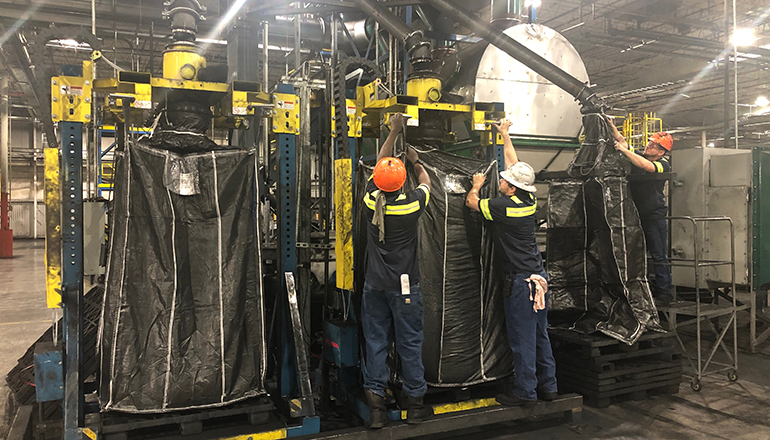 Bridgestone is currently producing agriculture tires for farm equipment from recovered carbon black at its Des Moines, Iowa, plant, which have rolled onto the market. Now, it’s building capacity to bring passenger tires for SUVs and vans to market in 2020, which will be produced at its Aiken, S.C.; Joliet, Ill.; and Wilson, N.C., plants. Plans are to expand to other locations later.

“Our immediate goal in 2020 [recycling 2 million passenger tires using recovered carbon black] aligns with our broader sustainability goals for 2050. This Delta-Energy partnership is a perfect example of how we will get to those 2050 goals,” says Kimpel.

Delta-Energy purchases scrap rubber from recycled tires. After it treats them through its polymerization process, the company further treats the material to make its proprietary D-E Black.

“Due to the additional processing, it is cleaner, and our particle size is more consistent, so it’s more adoptable in the manufacturers’ processes,” says Dave Abdallah, vice president of sales and marketing for Delta-Energy Group.

Historically, the pyrolysis industry has not understood the technical requirements of recovered carbon black.

“Many have tried to do pyrolysis who wanted to market the liquid products but didn’t pay attention to finding an effective way to use the solid material, which is what recovered carbon black is. So, the material was not adoptable by most of the rubber industry. A few out there, including us, now understand the performance requirements expected of recovered carbon black,” says Abdallah.

“Our partnership with Bridgestone is important to us. The acceptance of our material into high-tech products like tires is validation of our industry and our work,” he adds.

A three-part series this week looks at issues around producing sustainable tires and reducing tire waste, as well as innovations to address those issues. Read part one here, and read part three here.