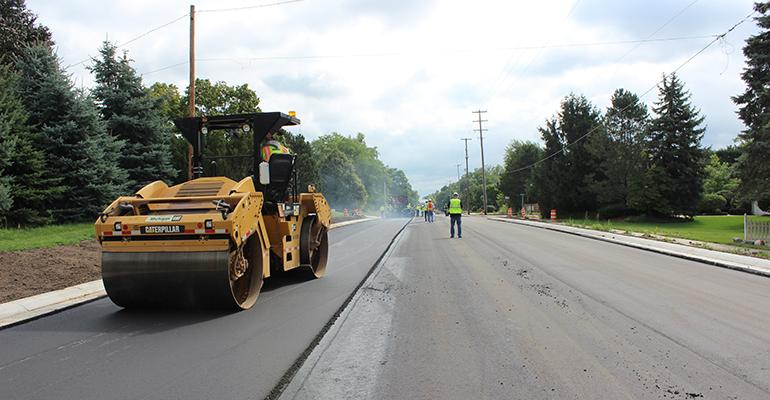 The final part of a three-part series examines the beneficial uses of rubber-modified asphalt.

Scrap tires often receive attention when they are illegally dumped or landfilled, and sometimes when they cause fires, but perhaps less highlighted is that some infrastructure stakeholders have found a way to put them to beneficial use while circumventing the environmental negatives. They are capitalizing on rubber from scrap tires that’s incorporated into asphalt to make high-performing, safe, relatively quiet roads.

Rubber-modified asphalt can stand up to a wider range of temperatures than virgin asphalt. It helps reduce hydroplaning during rainstorms by allowing for a looser aggregate, which creates spaces for water to flow through instead of pooling. And this durable material can extend the life of a road by 50 to 100 percent, depending on the amount of rubber incorporated.

Rubber-modified asphalt has been around for years, but it’s not widely adopted, as it historically has been more expensive than alternatives and harder to work with, though a few companies are developing technologies, and/or selling their established technologies, resulting in an improved product. Some state and county governments are using the mixtures with this scrap rubber on their highways, and asphalt-mixing plants and commercial property owners have bought in, too.

New Jersey Turnpike Authorities repaved more than 20 miles of its turnpike with 20 percent scrap rubber in 2018, and there have been projects on Georgia, Illinois, Virginia, Texas and Oklahoma highways, among others, in the past few years.

“There are not many opportunities where waste streams can make infrastructure better, but this is one of them. We can make our infrastructure safe, more durable and better prepared for climate change by using end-of-life tires,” says Allie Kelly, executive director of The Ray, a nonprofit that deploys new sustainability and safety technologies.

Working with Troup County in Georgia, The Ray funded a project where rubber-modified asphalt was used to build a new road parallel to Interstate 85. Then, in 2019, the organization leveraged funding from the Federal Highway Administration to repave four-lane miles of interstate in Georgia known as The Ray (named for Ray Anderson, founder of carpet manufacturer Interface), which is a total of 1 mile of rubber-modified road.

Troup County’s main incentive to go with this alternative asphalt was multifold. The rubberized mix is longer lasting than the typical mix and is more durable, which saves cost over time, though the rubberized mix itself cost more. It also enabled expansion of the county’s recycle and reuse efforts to protect the environment while reducing the dangers of scrap tires, says James Emery, county engineer for the Troup County Board of Commissioners. 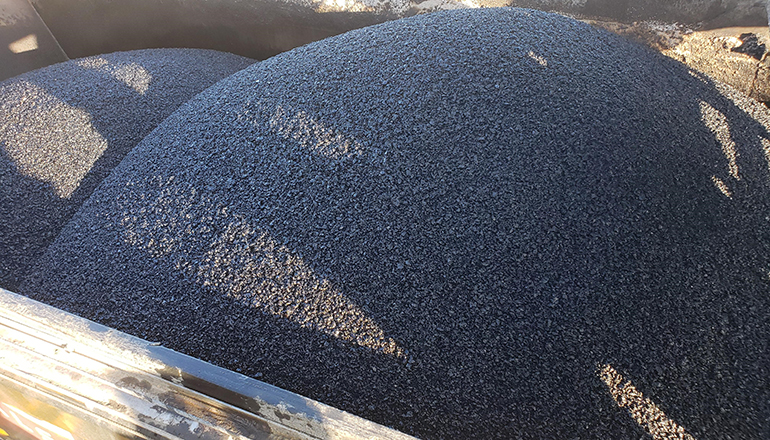 Asphalt products supply company Asphalt Plus, headquartered in Barrington, Ill., has been paving roads with rubberized asphalt from scrap tires for 17 years. The company makes its product using a dry process, which has benefits to previous technologies.

Until recently, tire rubber was only introduced into asphalt roads through a wet process, which involves heating crumb rubber (very fine particles) in hot liquid asphalt binder (oil), so the rubber absorbs the liquid asphalt. But it was expensive and makes asphalt sticky and hard to lay down and compact, explains Red Clark, president of Asphalt Plus.

Then, the industry began transitioning to a dry process where crumb rubber is chemically modified and added when liquid asphalt, stone and sand are mixed.

“It eliminates the step of having to cook it, but the scrap rubber still absorbs parts of the asphalt binder. We were the first to do it this way and are approaching 4 million mixed tons of asphalt roads, equating to about 7,000 miles of road across 11 states,” says Clark.

The dry process is less expensive, and the product performs as well, he says.

Pittsburgh-based Liberty Tire Recycling has an alternative to the wet process where it pretreats the rubber with hot oil, so it can integrate with asphalt. This “pre-wet” process makes the product easier to use. 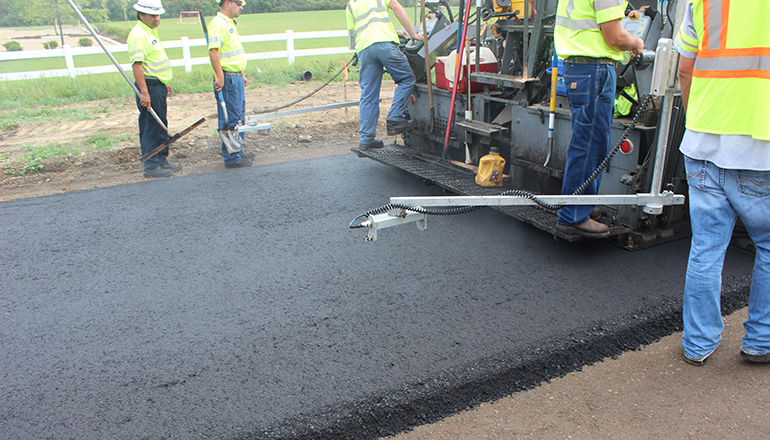 The company subjects the rubber to the same mixing and heating formula as witha wet process, but it creates a pre-wetted dry powder to add to the asphalt mix. In doing so, like Asphalt Plus, it circumvents several problems. Both companies’ technologies address limited capacity to store the liquid, challenges in handling it and enable those who use the material to work with small quantities.

“Before, asphalt liquid distributors had to make huge tanks of the rubberized asphalt binder, often more than they need, requiring storage capacity. The contractors they sell to who make the mixtures also needed storage. Additionally, the rubber settles in the liquid, so it requires agitating equipment to continually stir the material,” explains Doug Carlson, vice president of asphalt products at Liberty Tire Recycling.

But through the pre-wet process, the rubber absorbs the oil, then Liberty Tire packages the rubber in bags that it ships to mix plants that simply put the rubber in the asphalt mix. So, there is no liquid interaction and no need for liquid storage. And unlike if the product were created with a wet process, it does not have to be delivered to jobsites at elevated temperatures in order to be compacted.

“We have done smaller projects with this new technology since 2015. But we completed our first full-scale mixer in October 2019. Now, we are aggressively targeting markets for both small and larger jobs,” says Carlson.

Besides the functional benefits of evolving rubber-modified asphalt technologies, there are environmental advantages.

“There is no change in air emissions when rubber is mixed in the process. You avoid having to burn tires, and you can put them in applications where they can be used and reused. You get a good-quality road that can be less expensive and more durable than traditional paving methods,” says Clark.

A three-part series this week looks at issues around producing sustainable tires and reducing tire waste, as well as innovations to address those issues. Read part one here, and read part two here.