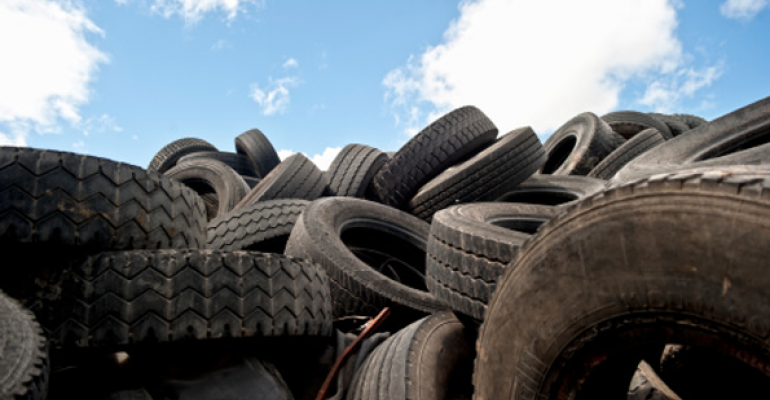 This three-part series looks at issues around producing sustainable tires and reducing tire waste, as well as innovations to address those issues.

End-of-life tires pose multiple environmental problems, with some, but limited, options to manage them and turn them into other products. This three-part series looks at issues around producing sustainable tires and reducing tire waste, as well as innovations to address those issues. Read part two here, and read part three here.

In part one below, we highlight developments such as Goodyear’s work to replace petroleum-derived oil with soybean oil in its product and a new process whereby one company has used spent tires to create asphalt roads—to the tune of 7,000 miles of road across multiple states.

In the U.S., 250 million wasted tires are generated a year, and they do not break down in landfills. The tire industry is working on innovations to address the resulting waste problem, while advancing a circular economy—from creating a sustainable natural rubber to prevent deforestation to developing technologies that have opened beneficial uses for wasted tires, including for infrastructure and to make new tires.

The industry reports it’s making headway; roughly 81 percent of end-of-life tires are reused or recycled, according to the U.S. Tire Manufacturers Association (USTMA). Plans are to go further.

“Our vision as an industry is to increase use of sustainable material in the tires we make. That’s the direction our members are heading toward, and I think this is a trend we will see more of,” says Sarah Amick, USTMA vice president of environment, health, safety and sustainability and senior counsel.

“We are entering a world with finite resources, and we need to better conserve them and focus on reuse,” she says, pointing to work already in progress. “For instance, we see a lot of promise around use of scrap tires in rubber-modified asphalt, which makes longer lasting roads. It withstands cracking, reduces noise of vehicles and rubber roads help ensure pavement and surfaces can withstand severe weather resulting from climate change. Scrap tires are not only used in road construction but as fill in stormwater infiltration galleries to clean stormwater.”

Goodyear has a tread compound with soybean oil that replaces petroleum-derived oil. Soybean oil helps keep a tire’s rubber compound pliable in changing temperatures. The corporation commercialized this innovation in several lines and is developing additional soybean oil-based tire options, in alignment with its goal to increase soy oil consumption by 25 percent by 2020 and fully replace petroleum-derived oils by 2040.

Michelin is incorporating a micronized rubber powder in new tires, which is tire ground to very fine powder that replaces both oil- and rubber-based materials. Michelin also makes an airless tire with less rubber, incorporating it only in the tread. And because the airless tire is puncture-free, it lasts longer. 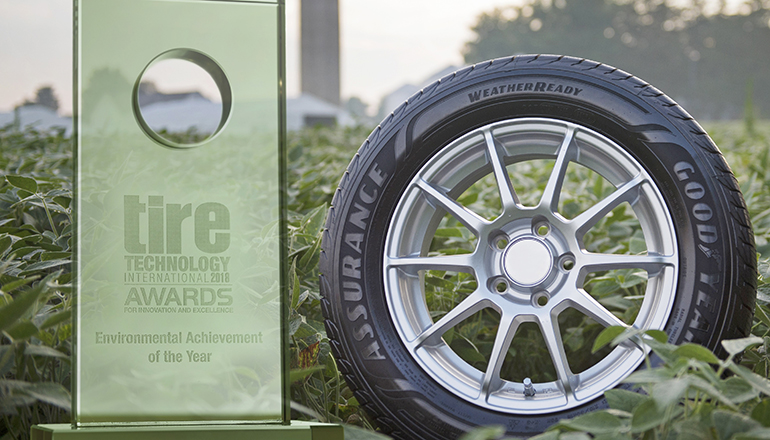 And Green Distillation Technologies recently announced it will build a U.S. tire recycling plant. The company is expected to receive up to $100 million to roll out more U.S. plants if the operation proves successful.

Besides its focus on sustainably sourcing materials and on recycling technologies, the industry is working on designs to enhance performance and ultimately cut CO2 emissions. Among design innovations are low-rolling resistance tires, which reduce fuel expenditure and emissions. A 10 percent improvement in rolling efficiency can reduce consumer fuel expenditures by 1 to 2 percent. The 10 percent improvement results in a reduction in emissions equivalent to taking 2 million to 4 million cars off the road per year, according to the Transportation Research Board, part of the National Academies’ Division on Engineering and Physical Sciences. 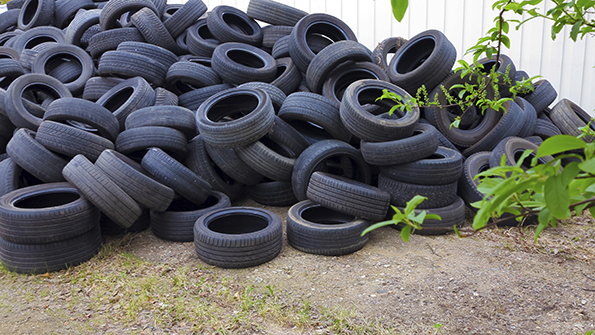 USTMA wants to get the word out about these and other initiatives, so it published its first sustainability report in 2019 and plans to release consecutive reports every two years.

“We want to demonstrate the good work this industry is doing. And we want to show how we are doing toward meeting our goals outlined in our visions, such as around environmental stewardship, safety and performance,” says Amick.

USTMA’s first sustainability report compiled data from 2016 to 2018. Among highlights are:

Still, there’s more to be done, and Red Clark, president of Asphalt Plus, which makes rubber-modified asphalt, says an industry paradigm shift is happening that will likely be a catalyst to more action.

“Society is looking now at the true cost of how we mange waste—not just the cost to landfill it but consequences, such as in the case of tires, microplastics they leave behind when they get worn or ground and emissions when they are burned,” he says.

While plenty of end-of-life tires are put to use, not all products made from them are produced leveraging green practices, and these practices are losing popularity. This will call for more innovations, like the technologies in the works, projects Clark.

“More than half of waste tires are disposed or burned for energy. But the fuel market is getting smaller because burners want cleaner and/or cheaper fuels. Waste tire markets that exist now are thin, so new markets need to be developed as old ones are going away. This will drive new and improved technologies,” he says.