“Sick of Signs” Campaign Clamps Down on Street Spam

Drivers everywhere are subjected to these demanding roadside pleas. While the entrepreneurs who tack them to telephone poles, tape them to lampposts and bus shelters, or plant them in public rights-of-way might view them as business opportunities, local governments see them as litter. They’re illegal and authorities want them gone.

Thus, the birth of Sick of Signs, a nationwide clean-up campaign launched by the Tow, Texas-based American Association of Code Enforcement (AACE). It encourages cities to dedicate a day or a week in September to ridding their communities of street spam. Yard signs on private property are acceptable and exempt.

“The main thing is letting people know we are concerned about the blight these signs cause,” Donna Wisniewski, an AACE board member and past president says. “We’re trying to do something on a regular basis to prohibit that.”

Wisniewski is a code enforcement officer with the Seminole County Sheriff’s Department in Florida. On Sept. 26, she will be out on a sign-collecting sweep with a citizens patrol group and other code enforcers from the county and its seven cities.

“We’ll make a great big huge pile, then head to the landfill,” she says, adding that the county waives tipping fees for dumped signs that day. “Unfortunately, it’s just not cost-effective to recycle them.”

Seminole County, north of Orlando, has been so diligent about sign removal that drivers often comment that they can tell when they are entering abutting Orange County because the sign cacophony picks back up.

“Still, as fast as we tear them down, somebody is putting them right back up,” Wisniewski says, adding that enforcers are vigilant about warning repeat sign placers. “(We) can charge them with littering if they’re caught putting signs out again.”

Local businesses aren’t usually the problem, she notes. The toughest challenges are signs with numbers directing callers to a throwaway cell phone or a call center. Unless caught in the act, the culprits are nearly impossible to track down.

“All of these signs keep getting higher and higher on poles and they’re also a hazard because there might be six or eight at one intersection,” she says. “If drivers are trying to read all of these little signs they’re not paying attention to what’s in front of them on the road or somebody stepping off the curb.”

To corral the maze of signs that sprout during any election season, Seminole County requires all candidates to register for a permit and pay a $100 deposit. The money is refunded if all of their campaign signs are removed two weeks after the election.

“By registering, candidates know where they can and cannot place signs,” she says. “It’s our way of trying to keep the litter end of it from being too terrible.”

Communities coast-to-coast have collected millions of signs since Sick of Signs debuted nationally in 2008. AACE rolled out its beta model in 2006 as a kickoff after the federal government declared October as National Code Compliance Month. Tests in Seminole County and Texas were so successful that leaders of the trade association thought it merited expansion. 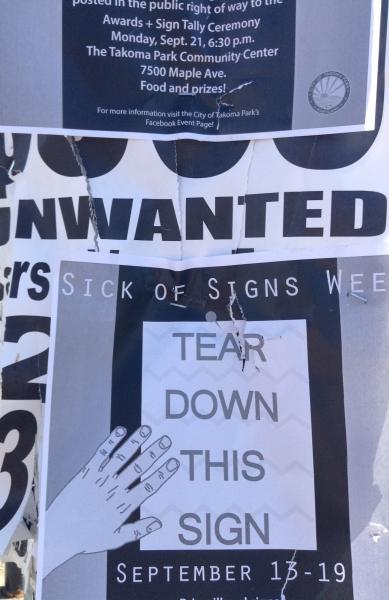 “Unfortunately, we don’t get as much involvement as we like,” Wisniewski says.

She singles out Takoma Park, Md.—a Washington, D.C. suburb known for its green ethic and artistic vibe—as a stalwart on the Sick of Signs front.

Lucy Neher spearheaded this year’s weeklong effort by, ironically perhaps, hanging posters around the city that encouraged residents to “Tear Down This Sign” between Sept. 13 and 19.

“It’s all about awareness,” says Neher, part of the city’s Housing & Community Development Department. “We do a lot of public education because we don’t want to put up with those obnoxious signs.”

Years ago, Takoma Park was fielding so many complaints about illegal signs that officials had to act.

“We’ve become experts in this,” Marjorie Ciccone, code enforcement supervisor, says about de-signing the city. “I think it looks much better.”

While making his code inspection rounds, co-worker Timothy Gratton is always prepared. His sign-removal toolkit includes a pair of sturdy gloves, a metal pry bar and a small ladder to extend the reach of his 6-foot frame. Then he carts his collection to a city trash bin in a reusable cloth bag.

One lurking danger is being pricked by stubborn staples, screws or roofing nails that affix signs to utility poles so securely.

“Anybody who does this,” Ciccone says, “we make sure they have a tetanus shot.”