When Philadelphia Eagles take the field and the fans take their seats, a special team of Lincoln Financial Field employees gears up for their challenge of the night: sorting the stadium’s trash.

The Green Team, which is made up of sustainably driven individuals, was conceived by the Eagles’ fan engagement team and service provider Aramark as part of the Eagles’ Go Green initiative.

“In 2003, we ripped open a trash bag and looked at what could be diverted from a landfill and what could be recycled,” says Philadelphia Eagles Director of Fan Engagement Norman Vossschulte. “We created the Green Team because we realized that it was much easier for us to sort through the trash than for fans to focus on properly disposing of all their items.”

The Green Team is responsible for making sure that the trash thrown out in the stadium makes its way to its proper destination. In order to make that possible, the team sorts through the trash and places it into five categorized bins at a designated sorting station located outside the stadium.

“Depending on the event, there can be anywhere between five and 70 people sorting the trash,” says Vossschulte. “It’s a tough job, but they take it very seriously and are very proud of the work they do.”

Each member of the team learns the ropes from supervisors and on-the-job training, which starts off with simpler tasks like picking out all of the aluminum from stadium bins and working up to more difficult tasks, like spotting compostable items. The members of the Green Team are also rewarded in a number of different ways for their efforts.

“We pump in the stadium audio so they can listen to the game while they work, and any money made from our trash-sorting efforts goes toward incentives for the team,” says Vossschulte. “We have Phillies suite nights and gift cards, for example, to try and make it the best position it can possibly be.”

Last year, the Lincoln Financial Field became 100 percent landfill free thanks to the Green Team’s efforts, and the Eagles are doing everything they can to make sure that status sticks.

In addition to the Green Team, the Eagles also took the NFL world by storm a few years ago when they teamed up with NRG Energy Inc. to install 11,000 solar panels and 14 wind turbines at the stadium, making it the largest solar power plant in the NFL. 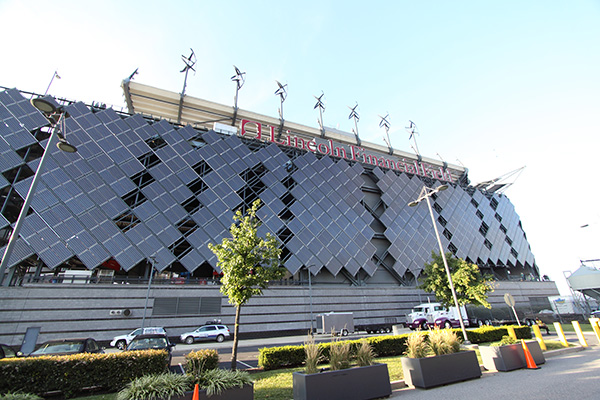 With this solar power plant, the Eagles produce about 40 percent of their own energy and feed the energy created onsite back into the grid. Then, they buy back the clean energy from NRG at a discounted rate.

“NRG agreed to a multi-year corporate sponsorship with us, and we have seen a large cost reduction in spending for our energy,” says Vossschulte. “This system also helps us regulate our costs in a fluctuating market because we know what we are going to spend next year and the year after that.” 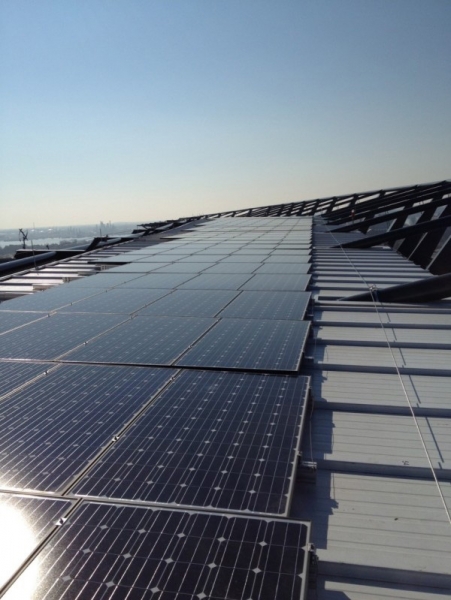 The Eagles are also continuing to make strides to add more recyclable and eco-friendly products to the mix by keeping up with industry trends and attending conferences. From corn-based food and beverage containers to LED lighting, they are thinking from head-to-toe when it comes to going green.

“A couple years ago, someone showed us a water system infused with electrolytes and salt, which was better than chemicals,” states Vossschulte. “We looked at it and it worked for us so now that is the water system that we use for cleaning.”

More recently, the Eagles noticed that the rise in use of waterless urinals. The took a look at them, installed a few and created their own rubber flange, which now saves thousands of gallons of water by reducing the amount of water used per flush by half. For the Eagles, all of these sustainability efforts are a thought-out process and a consistent journey.

“When we first opened the stadium, our owner told us to think of ourselves as trendsetters,” says Vossschulte. “We continue to set trends in hopes that everyone will follow them. We don’t see our efforts as a competition, and they are not something we convert overnight and spend millions on. We do this because we believe it’s the right thing to do.”

The Eagles often give tours to other teams, colleges and engineers to share their information with anyone who is interested because they believe it’s not a competition to help make our planet greener.

“We are hoping that people will come up with even bigger and better ideas because football aside, where we are competitors, I think we all know that we are in it together when it comes to sustainability,” states Vossschulte.