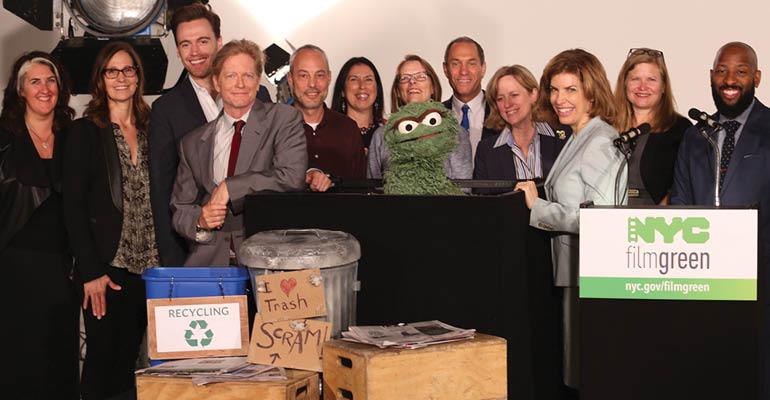 “New York City’s production industry is busier than ever, and we are committed to helping it be as environmentally friendly as possible, said Menin in a statement. “NYC Film Green is an important step, as television and film productions can make small changes that add up to a positive impact on our city and our planet. I think all three of the productions that participated in the pilot cycle of the program, and look forward to more incredible results as the program grows. Over a six-month period, television productions Sesame Street, Divorce and Madam Secretary worked to reduce their environmental impact. Together, the productions saved 48 trees by recycling paper, donated more than 7,800 meals and more than 80 pounds of set dressing and props, diverted 1,238 tons of waste from landfill and used 94,520 fewer single-use plastic water bottles.

“Producers have the power to go green. There is no reason not to anymore, said Producers Guild of America (PGA) President and Madam Secretary Executive Producer Lori McCreary in a statement. “On Madam Secretary, we used the PGA’s Green Production Guide, a resource guide detailing the financial and environmental benefits for sustainable production. The NYC Film Green designation adds an additional incentive for cast and crew to take pride in our efforts.”

The announcement of the pilot program results comes on the heels of a new commitment from the New York City Mayor Bill de Blasio Administration to pursue the principles and goals set forth in the Paris Climate Agreement. The goals include reducing NYC’s greenhouse gas reduction plans and actions and acting locally and globally to meet the U.S.’s 2016 pledge under the Paris Climate Agreement. “Last week was a strange week with President Trump withdrawing the U.S. from the Paris Climate Agreement,” says Chambers. “Although the president has turned his back on the environment, New York City has not. New York City is pushing toward a fundamental shift in our commitment, and we are prioritizing equity and environmental justice. We are consistent with our values and doing whatever we need to do to end this crisis.”

NYC Film Green is open to any production shooting for at least one day in one of New York City’s five boroughs; however, to receive the NYC Film Green mark of distinction, productions must meet a set of core requirements, complete a basic Green Production Guide Carbon Calculator, meet at least five of the electives outlines in the requirements guide and divert more than 30 percent of their waste output.

While NYC Film Green has just ended its pilot program, Maniac has already joined the program and has made a commitment to go green. NYC Film Green expects that other productions will soon follow suit and do their part to make the world greener.