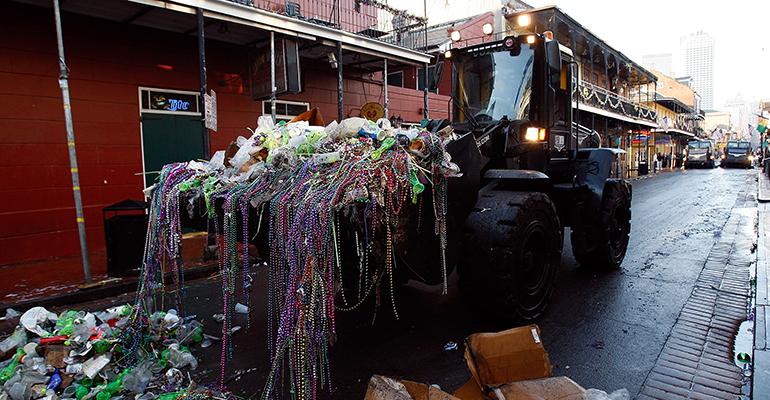 The cleanup of Mardi Gras is no easy task, and often lasts for days after the celebrations come to an end.

Each year on Fat Tuesday, thousands of people gather together in New Orleans (the location of this year's WasteExpo) to celebrate Mardi Gras. And while the drinks are flowing, food is being served and beads are being earned, a crew of approximately 600 men and women are getting ready to hit the streets for a different purpose: waste cleanup.

The cleanup of Mardi Gras is no easy task, and often lasts for days after the celebrations come to an end. In addition to regular waste, streets and sidewalks need to be cleared of items like abandoned chairs and couches, food scraps, plastic bags, cardboard boxes, foam cups, cigarette butts, cans and bottles and beads.

“The New Orleans Department of Sanitation works with a number of different departments to ensure that we have enough staff members and pieces of equipment to help us remove the debris from the streets in a timely manner,” says New Orleans Department of Sanitation Direction Cynthia Sylvain-Lear. “This year, we are using more than 100 pieces of equipment, including street sweepers, pushers, blowers, front-end loaders, skid steers, roll-off trucks and dump trucks, to collect and remove waste.

“The partnerships we have created with these organizations have been fantastic, and we try to hire folks from these organizations when positions at the department of sanitation become available,” says Sylvain-Lear. “Employing these folks during an event like Mardi Gras helps us see their work ethic and what they are capable of because they are working long hours and being tasked with hard work.”

The department of sanitation also works with Empire Services, an independently owned commercial facility maintenance company that services the City of New Orleans and the Downtown Development District, to clean up majority of the main parades routes. As the parades pass through different areas of the city, the duo starts cleaning up debris. This process allows main parades routes to be cleared of debris within two to three hours after the parades end.

Recycling of recyclables found along the parade routes is a challenge for the department of sanitation because most of the materials are contaminated. But to help ramp up recycling efforts, the department of sanitation asked parade-goers to bring their own recycling bags with them and welcomed those who wanted to collect the aluminum cans and plastic bottles ahead of the cleanup crew to do so in a safe manner.

To help reduce the amount of waste generated by parades participants, the department of sanitation holds meetings with the parades participants before the events to ask them to keep and recycle their own cardboard boxes and beads. If participants don’t want to keep their leftover beads for other events, they can give them to Arc of Greater New Orleans, a nonprofit organization that provides services for children and adults with intellectual disabilities, or drop them in one of the bead recycling bins placed along the parade routes.

“In addition to having bead recycling bins placed along the Mardi Gras parade routes, we offer year-round bead recycling at our Recycling Drop-Off Center, which is convenient for our residents because they can drop off their beads while they are dropping off their paper, plastic, glass, e-waste, tires, batteries, etc.,” says Sylvain-Lear.  “All of the beads collected are given to Arc to recycle and repackage for resale and use for other events.”

Last year, approximately 86,000 pounds of beads were collected for recycling by Arc and about 900 tons of waste was removed from the streets following Mardi Grad celebrations. The data for 2017 is still being collected, but the department of sanitation expects the numbers to be in the same ballpark.