How a Grassroots Effort is Taking Plastic Straws Off the Menu in Boulder, Colo. 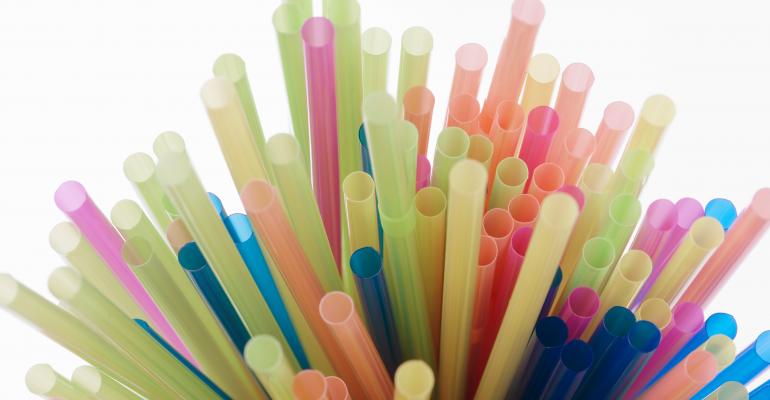 Americans use 500 million straws per day, which has led the plastic tubes to be listed in the top 10 lists of littered items found on beaches and in waterways.

On July 11th local activist Graham Hill stood outside the local 7-Eleven in Boulder, Colo., handing out compostable paper straws to those taking advantage of the free Slurpees the chain was giving away to celebrate its birthday.

Hill says he personally handed out thousands of straws along with other volunteers. They hope to see the continued growth of a grassroots movement called "Suck the Straws Out of Boulder." Hill and others handed out straws provided by Fort-Wayne, Ind.-based paper straw manufacturer Aardvark Straws to try and illustrate there are more environmentally friendly alternatives to ubiquitous plastic straws. The problem with straws is that many end up in bodies of water.

Some municipalities are taking a legislative approach to cut down on plastic straws.

“Several local governments are exploring new rules or processes governing straws; however, it will be very difficult to successfully divert them, mostly due to their very small size,” says SWANA CEO and Executive Director David Biderman.

In September in Davis, Calif., a straw by request law will go into effect, where restaurants can only serve straws when customers request them. Berkeley, Calif., is considering a ban on plastic straws, and next month Fort Myers, Fla. may consider a rule that businesses with take-out beverages serve them with biodegradable alternatives.

Hill says Boulder businesses hand out approximately 150,000 straws per day for 100,000 people. National statistics suggest Americans use 500 million straws per day, which has led the plastic tubes to be listed in the top 10 lists of littered items found on beaches and in waterways.

“It adds up quickly and it’s something we can do without,” says Hill. “Your drink is maybe 10 minutes but your straw is forever because they don’t decompose. I always say, ‘We can do better.’”

But while the numbers may seem staggering, the volume they represent is not as significant.

“They are not a significant component of the overall waste stream compared to food waste or paper, says Biderman.

Hill says there is always an argument to be made for reducing single-use plastic and that’s the message behind the movement. “There may be bigger issues out there, he says, but we’re picking straws, because we can reduce the number fairly quickly.”

Anne Germain, director of waste and recycling technology says she supports the idea of reduction first. “Let’s reduce and reuse to the maximum extent possible,” she says.

Then see what the next problem is.

For recyclers, says Germain, plastic straws don’t seem to be an issue, at least not like plastic bags are in machinery at MRFs, for example.

“It’s never been brought up to me that it’s a problem,” she says.

Instead the straws are more likely to fall in with the “fines” that are sent to landfill.

Next, the question is whether or not enough of this material is collected to justify sorting it out. Does it fall in with other materials and then have to be resorted? That would be dependent on the market. She speculates the straw would end up with the fines, and ultimately, the recyclers can only take so much other material in before it leads to contamination and then lower prices.

“And a lot of it is driven by prices of what they’ll be able to get for the final commodity,” says Germain. “I think most of the problem that people have with plastic straws is that they might end up in our oceans. And I think, the thing about when they end up in our oceans is, it’s because they haven’t been managed by our waste and recycling system in any way. This isn’t an issue of landfill versus recycling.”

It is an issue, she says, of it not being properly disposed of to begin with.

That’s why Hill’s campaign is going to restaurant owners and talking about environmental impacts of plastic straws and potentially getting them to go from plastic straws to compostable, straws on request or no straws all together.

“Going from plastic to compostable is a big move for some restaurants and it reduces the amount of plastic in the trash,” Hill says.

For patrons, we’d like for them to be out in front of their drink order and request no straw because our big hope is to get restaurants to put some messaging around the use of plastic straws in the first place on their tables. But we realize most restaurants may not be willing to do that.

For Hill, the campaign’s idea really ignited when he visited Taco Junky and Tequilla Bar—a campaign partner. The Boulder restaurant serves only compostable or paper straws and only on request. Hill says the restaurant also offers great messaging to patrons explaining the reason behind it.

The fact that it’s a grassroots effort is important, he says. “We are not talking about a ban. This is not being controlled by the government, this is grassroots. From a restaurant point of view, we don’t want them to feel they are being choked down by the city of Boulder. We want them to wave their flag and say, ‘Hey, we’ve done this.’”