A look inside the Recyclebank/Waste Management partnership.

Under the terms of the partnership, Recyclebank gets access to the 18 million residential customers within Waste Management's vast network and assumed responsibility for Greenopolis, Waste Management's consumer-facing website and recycling incentive program (a former Recyclebank competitor). In exchange, Waste Management is accessing something central to its goal of harvesting more value out of the waste stream: a proven method of boosting recycling rates.

Recyclebank is a web-based recycling incentive program that aligns consumers with consumer brands in rewards-based relationships, through what the company calls its green rewards program. As consumers reach certain milestones in terms of the amount or type of packaging they put into recycling collection systems, they earn points, coupons or other rewards from Recyclebank's network of brand and business partners.

The partnership is one of many forged in recent years by Waste Management's Organic Growth Group, which has $2.2 billion invested in a range of emerging technologies and service companies. The group's focus is divided into four categories, says Vaillancourt: renewable energy, recycling technologies, waste conversion technology (such as fermenting organic material to create biogas) and consumer-facing developments, which is where Recyclebank fits in.

While Waste Management calls itself the country's largest recycler, it's always looking to boost the volume of recyclables it collects. Waste Management sees linking with Recyclebank as a direct tool for increasing and sustaining the density of take-back.

Among the 300 communities where Recyclebank has established its services with recycling collection providers, there are some impressive success stories. In Cincinnati, where Recyclebank launched in 2010 in tandem with an expanded curbside collection system, participation increased by nearly 75 percent and the city increased the amount of recyclables collected by nearly 50 percent. This kind of result attracted Waste Management's attention, but so did the partnerships that Recyclebank was forging with major consumer brands, such as Unilever and Kraft.

"We developed Greenopolis into a pretty big business," says Vaillancourt, and while the company was aware of Recyclebank, it wasn't losing business to the startup. There are around 1,500 Greenopolis kiosks in schools, community centers and other public spaces around the country, where consumers can drop off their recycling and scan each container, thereby getting credit based on the specific items they recycle.

That connection between the consumer and the specific brands they purchase is key, because it's a way in which brands such as PepsiCola, which sponsors many of the kiosks, can connect directly with their loyal consumers. "We knew that one thing was clear: measurement matters," says Vaillancourt. "Consumer packaged goods companies would only give rewards based on activity." Waste Management saw that Recyclebank had honed its ability to not only measure recycling activity, but also create a unique marketing platform for consumer brands to reach consumers.

Yolles observes that since they announced their partnership last fall, "there has been tremendous activity to align [Recyclebank's] sales programs with Waste Management's sales, to socialize the meaning and the potential of the partnership within both organizations." As for those millions of Waste Management customers that Recyclebank now has access to, Recyclebank has launched its green rewards program in a couple small California municipalities and plans to roll out to cities in Arkansas this month, including Little Rock, North Little Rock and Jackson. Many more deployments made possible through Waste Management are in the works, the company says.

For Waste Management, the Recyclebank alliance helps in bidding for municipal contracts as well, says Vaillancourt, as about half of the requests for proposals that municipalities issue also ask for affinity programs. And while Waste Management already offers curbside recycling collection and in many communities has installed its Greenopolis kiosk collection points, "from a municipality [perspective], we have a more robust set of partners now with Recyclebank."

While Recyclebank is now operating the Greenopolis website, it hasn't changed the look or branding of Greenopolis just yet. "At the moment, the intention is to keep these brands separate and distinctive," says Yolles. But the Greenopolis site will benefit from Recyclebank's approach to reaching consumers.

"There is one particular patent that we own; it relates to the methodology of improving recycling through financial incentives," says Yolles. "There are a number of other patents [we've filed] that are pending." As far as the competitive landscape goes, he says, with Greenopolis now under the Recyclebank umbrella, a main competitor has been turned into a collaborator. "There are one or two other smaller players that have emerged in this space, but whether their activity infringes on our patent…I've not taken a look at that.

We want to protect our intellectual property, but equally important is that we are continuing to look forward and innovate the product and consumer experience."

Indeed, Yolles and Vaillancourt are each very focused on the future, and the role that Recyclebank and Waste Management can each play in it. This goes beyond simply diverting recyclables from landfills and providing a new marketing platform for consumer packaged goods companies. It's about dwindling resources.

"As we run out of landfill," says Vaillancourt, "People will start competing for the same waste streams." And when that happens, says Yolles, "supply chain security enters into this. The more enlightened companies are absolutely thinking in those terms." 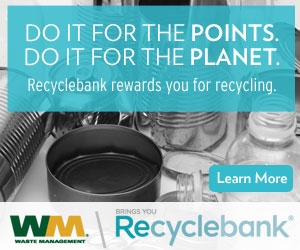 Amid growing consumer interest in packaging with higher recycled content and less waste, consumer packaged goods companies are also looking for more consistent and secure packaging supply. But they're also looking ahead to possible legislation that would require them to reclaim and reuse their packaging materials. While no U.S. state has passed an extended producer responsibility (EPR) law for packaging, bills were introduced in Rhode Island and Vermont and a number of other states are considering them, says Bill Sheehan, executive director of the Product Policy Institute.

"It's becoming apparent that it just doesn't make sense to have local governments responsible for recycling," says Sheehan. They're cash-strapped and they don't benefit from recycling the way that businesses would. By reclaiming packaging they could reuse it in their own supply chains, he says.

Nestle Waters has been perhaps the most vocal manufacturer to take a proactive stance on EPR laws, which it sees as a path toward higher recycling rates. Coca-Cola has also supported EPR laws. It's no coincidence that beverage companies, which are beholden to beverage deposit laws in 10 states, want to advance EPR laws, says Sheehan, since they'd like to "share the love" with manufacturers of non-beverage packaging.

"I think most consumer packaged goods companies are aware of or involved in EPR-related discussions," says Yolles. "Our point of view is that the goals of EPR are to minimize waste, influence the design of products for disassembly. We support the goals of EPR and we believe we have a unique engagement platform to help both government bodies and CPG companies to achieve the perspectives of EPR.

"We are not in a position to evaluate different funding mechanisms, or how the legislation should be designed, but at some point the consumer needs to decide what to do with packaging at the end of its useful life. Since our system uses incentives to encourage the consumer to do the right thing, we think we can help [implement EPR] in a meaningful way."