San Francisco and Recology work to maximize recycling at the America&rsquo;s Cup.

San Francisco likes to lay claim to the title of America’s Greenest City. So when the city by the bay was chosen to host the 2012-2013 America’s Cup international sailing race, local officials had no intention of being a waste and recycling also-ran.

The event organizers, with the help of locally based waste hauler and recycler Recology Inc., put on an eye-catching performance for the city at the 2012 preliminary events in August through September, achieving a 98-percent landfill diversion rate. And the organizers have set a goal of 100 percent for the America’s Cup main events this summer.

“The city said this event should be zero waste in San Francisco,” says Jill Savery, head of sustainability for America’s Cup Event Authority. “We had to have our act together.” 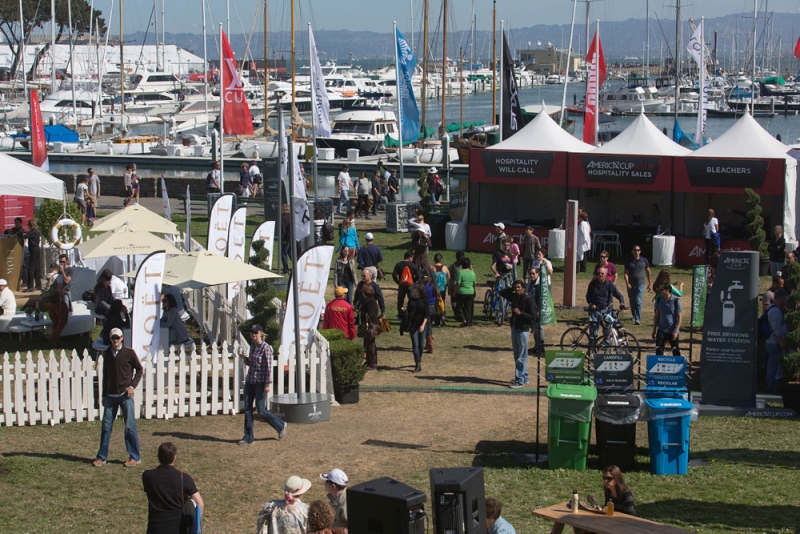 San Francisco’s robust recycling infrastructure offered a strong start. Every event has to go through training with the city’s Department of the Environment (DOE) on diversionary skills.

But America’s Cup organizers faced special challenges, beginning with the recycling stations they needed for attendees. “The venue was pretty unique because it’s completely open; anybody could come in and enter the race village,” Savery says. “And the race takes place just off shore.”
As a result, it’s impossible to control materials coming into the site. The organizers needed to connect with facilities and processes to handle any material.

Another factor is the amount of wind the area gets. It’s great for sailing, but not so much for waste and recycling control. “It was critically important to keep it in the containers,” says Savery. “We had a major litter crew going around at all time.”

Another unique tack the organizers took particular to San Francisco, Savery says, was to hire “greeners,” people who help separate the waste. “It’s very difficult to have 100-percent accuracy when you have a public recycle station.” So a team of workers sorted through every bit of discarded material in all three streams – commingled recycling, composting and landfill.

“That really is the trick to getting a super high rate,” Savery says. “You wouldn’t get it if you didn’t have people working at your site.”

The city approached Recology and asked them to work with America’s Cup organizers and “get as close to zero waste as we could,” says Paul Giusti, regional community and government affairs manager for the company.

“It wasn’t really that difficult with our three-source system here – trash, recycling and composting,” he says. “We can implement everything with our system.”

“Then what we did a little differently was we took in material we don’t normally accept in our programs,” he says. “There’s no way to avoid film plastic. But we had them [the organizers] keep it separately and ended up with half a ton in film plastic alone. It was clean enough that we could bale it and sell it and recycle it.”

That in itself was a big contribution from Recology, Savery points out. There’s a lot of plastic film waste generated with catering and merchandising, and Recology was able to recycle all of it.

The first goal was to reduce waste, she adds, so everything from carpeting to signage was kept for later use or donated to non-profits.

Styrofoam, for example, went to Waste to Waves, an organization that takes the materials and makes it into surfboards. “It’s really a material management plan,” she says of the overall strategy. “What’s going in and out. Trying to reduce and reuse as much as possible.”

A symbol of the effort, which Savery says was the result of a great partnership with Recology and the DOE, came on the final day of events last year. Through a miscommunication the recycling bin didn’t get emptied and was full. “We looked over at the landfill Dumpster and it was empty because there was so little landfill waste,” she says. “We were able to convert it easily.”

Going for the Prize

Because the venue was open actual attendance numbers weren’t kept, but Savery says it certainly was in the hundreds of thousands. Of the 13.44 tons of waste generated, 9.89 were recycled, 3.28 composted and just 0.27 landfilled.

While they finished the 2012 events with a strong performance, Recology’s Giusti says organizers were skeptical when the zero waste goal was first put to them. “Once they got into it, though, it was kind of a snowball effect. They were gung ho, really embraced it and saw how cool it could be. And once the infrastructure is there it’s just not that difficult to do.”

Giusti says it’s not uncommon for events in the area to achieve 80 percent to 90 percent diversion, “but it’s so dependent on the organizers buying into it.”

Recology sees its role in events like this as not just a service provider but also an educator and a whole package provider, from helping to plan the event to its implementation.

For events like this, education is the biggest challenge. “People in San Francisco know the program well, know what goes into what bin,” he says. “When you draw from outside, they might not be used to as robust a program.” Savery also says training is challenging, as it is logistically difficult to reach everybody on the site with different schedules.

The main events for the America’s Cup run this summer from July to September. How do the organizers plan to top their 98-percent performance?

“You can always improve,” Savery says. “We can always reduce the amount of material we generate, and also look at the types of the materials, everything from compostables to using materials over as much as possible.”

The organizers are working with the DOE to learn how to train local people and volunteers to in turn train the spectators. They also are looking what different needs there are for different areas, from the media center to the house staff areas to the concert venues.

“We’d like to leave a legacy of how other events can learn from what we are doing,” Savery says. “We’re promoting behavior changes.”
And reaching 98 percent again or better can happen, Giusti says. “I think we should be able to do it. A zero waste event is achievable and realistic. It’s not just a pie-in-the-sky idea.”

(There are some clarifications from the original story. The America's Cup organizers put on the event and achieved the diversion rate, not the city; Recology consulted with the organizers on working with vendors and compostable materials, and also on the recycling kiosks; and the company recycled all the plastic film collected, not almost all.)