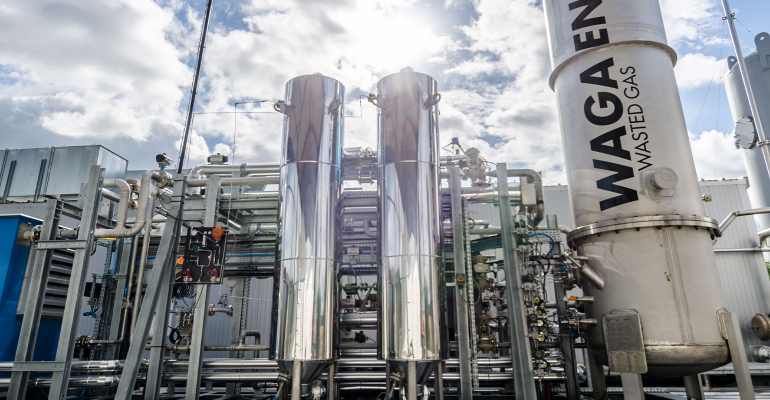 Waga Energy is joining forces with Steuben County (New York, USA) on a Renewable Natural Gas (RNG) project at the county’s Bath landfill. The RNG produced will be injected in the local grid and used as a biofuel to decarbonize mobility. The Steuben County landfill will be the first in the US to adopt Waga Energy’s WAGABOX® technology, already in use at ten landfills with an additional eleven facilities forthcoming in Europe and North America.

On December 30, 2021, Waga Energy, a European expert in the production of Renewable Natural Gas (RNG) from landfill gas, signed a contract with Steuben County, New York for the development of an RNG project at a municipal solid waste landfill located in the town of Bath.

Waga Energy will build a landfill gas upgrading unit using its patented WAGABOX® technology. Once completed, the unit will produce grid compliant RNG (also known as biomethane) from the methane generated by the decomposition of the waste in the landfill.

The WAGABOX® unit will be commissioned by March 2023. It will purify 1,000 standard cubic feet per minute (1,600 cubic meters per hour) of raw landfill gas to deliver 207,000 mmBtu (60 GWh) of RNG. The facility will produce RNG that can be used for residential consumption or as a transportation fuel, equivalent to supplying around 4,000 homes with clean, local, and renewable energy, saving an estimated 13,500 tons of carbon dioxide per year.

Selling RNG through a purchase agreement

Waga Energy will fund, build, operate and maintain the WAGABOX® unit under a 20-year landfill gas supply contract with Steuben County. The entire facility will be built in North America, with the exception of one of the components of the cryogenic module that will be imported from France.

Waga Energy will generate revenues by selling RNG to a private offtaker through a purchase agreement similar to the PPAs (power purchase agreements) commonly used for renewable electricity projects. The revenue generated by the project will be shared with Steuben County.

Steuben County is home to approximately 99,000 residents, and its solid waste landfill in Bath is authorized to dispose of 150,000 tons of waste per year. In July 2020 the County issued a competitive RFP (request for proposals) for a landfill gas utilization project to collect and upgrade the gas which is currently flared.

WAGABOX® is a breakthrough technology for upgrading landfill gas into grid compliant RNG. The result of fifteen years of research and development, the technology combines membrane filtration and cryogenic distillation to separate methane from landfill gas. Over the last five years, ten WAGABOX® facilities have been commissioned in France. An additional eleven projects—eight in France, one in Spain, and two in Canada—are under construction. The Steuben County WAGABOX® project is Waga Energy’s first project in the United States.

Waga Energy CEO and cofounder Mathieu Lefebvre said, “We are honored to have been selected by Steuben County to upgrade the methane from its Bath landfill. This first contract in the United States marks a major milestone to introduce our WAGABOX® solution to the US market. We are eager for landfill operators in the United States to see how efficient our technology is, and how our hassle-free operating model can help small and medium-sized landfills generate additional revenues while taking concrete action against climate change.”

Steuben County Manager Jack Wheeler said: “Steuben County is thrilled to partner with Waga Energy in leveraging landfill gas in an environmentally conscious and economically advantageous project.  Waga Energy has proven to be a highly innovative international firm and bringing this collaboration to fruition will benefit Steuben County and our region for many years to come.”

Waga Energy (ISIN: FR0012532810, symbol: WAGA) produces competitively priced Renewable Natural Gas (also known as “biomethane”) by upgrading landfill gas using a patented purification technology called WAGABOX®. The RNG produced is injected directly into the gas distribution networks that supply individuals and businesses, providing a substitute for natural gas. Waga Energy finances, builds and operates its WAGABOX® units under long-term contracts with landfill operators for the supply of raw gas, and generates income by selling the RNG it generated. Waga Energy operates 10 WAGABOX® units in France, representing an installed capacity of 225 GWh/year. Ten units are under construction in France, Spain and Canada. Each project initiated by Waga Energy contributes to the fight against global warming and the helps the energy transition. Waga Energy has been listed since October 27, 2021, on Euronext Paris. waga-energy.com