LFG can be used to fuel vehicles, power gas turbines and can be converted to electricity.

The National Waste & Recycling Association (NWRA) just released its issue brief highlighting the benefits of landfill gas (LFG) as a source of methane.

“Modern landfills are highly engineered facilities with advanced technology. They are the most efficient method to dispose of solid waste. Landfills offer significant benefits to the communities it serves. The landfill gas that's captured at these facilities can be converted to generate electricity that power those local communities,” said NWRA President and CEO Darrell Smith in a statement.

According to the brief, as degradable organic materials such as food and paper decompose in municipal solid waste landfills, LFG is generated. Anaerobic bacteria produce the gas as a byproduct of consuming the organic matter. LFG is approximately half methane and half carbon dioxide (CO2), as well as a small amount of non-methane organic compounds. 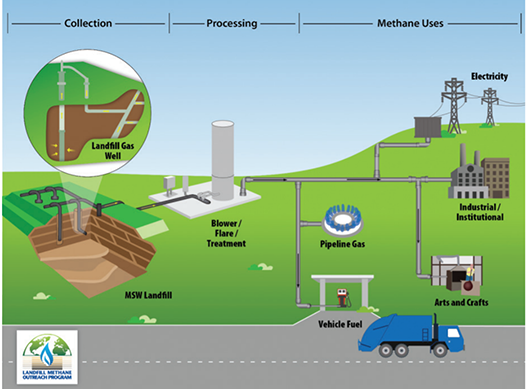 And because methane is the same compound found in natural gas, used for heating and cooking and producing energy, recovered LFG can be used as a source of energy. However, according to the brief, it can be dangerous due to its flammability, and it is a greenhouse gas. Because of this, LFG may be regulated for collection and management to protect human health and the environment.

Other uses include compressing the LFG to fuel vehicles, power gas turbines and converting it to electricity.