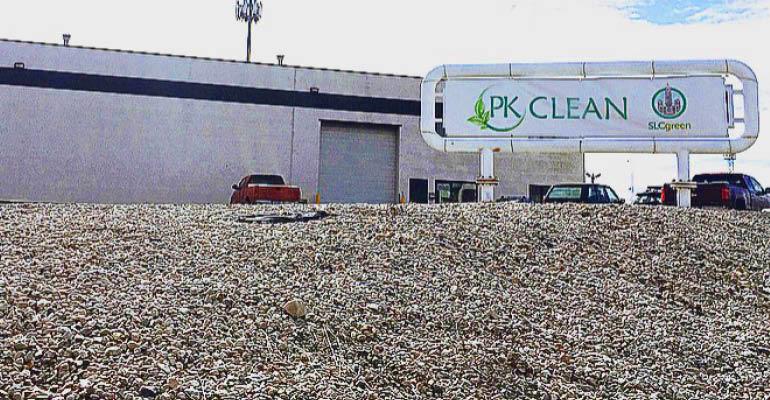 Slated to open in early 2018, the operation will have capacity to process 70,000 tons of municipal solid waste a year.

Slated to open in early 2018, the operation will have capacity to process 70,000 tons of municipal solid waste a year, including 3,500 tons of mixed plastics, diverted from the nearby Chester landfill. The plant will be able to produce about 832,142 gallons of synthetic fuel a year, says PK Clean CEO and Founder Priyanka Bakaya.

Nova Scotia, Canada-based Sustane’s new materials separation facility will extract hard-to-recycle plastics that PK Clean technology will convert to diesel for multiple applications. But first, Sustane will pull organics from the stream to be made into biomass pellets to burn in conventional industrial boilers.

“We are taking what would otherwise go to landfill and extracting value whether to make diesel fuel or whether to make pellets used as a cleaner energy source than coal,” Bakaya says. “We hope to showcase and replicate [this model] globally as a solution to municipal solid waste.”

“The other innovation that differentiates us is automation, which reduces labor costs,” Bakaya says. “We have one key person in the control room monitoring the process. No one is manually switching knobs to manage temperatures, pressures, and other controls.”

The proprietary technology can handle a range of feedstock variability, including contamination from organics. And it can process as little as five tons of plastic a day, providing an option to midsized operations.

The Sustane equipment is being built in Salt Lake City, where PK Clean’s is headquartered, and will be installed at the Nova Scotia processing site. As PK Clean looks to expand, it will continue to focus on a model where the technology and processor are co-located to cut costs and emissions.

The piece that Sustane brings to the table is the ability to separate plastics through a steam process, followed by further separation and cleaning.

The steam takes paper and board back to wood pulp material and causes plastics to shrink into balls that can be further processed to become feedstocks, explains Sustane Technologies President Peter Vinall. The company is buying PK Clean’s equipment package and housing the diesel-producing process in its building.

A few other organizations have recently focused on plastics-to-fuel, including GEP Fuel & Energy Indiana, with plans to launch a facility in Indiana.

But while many waste-to-energy technologies in and of themselves are successful—whether plastics to fuel or other—tough economics have been the downfall to several of them, especially as oil prices lay low, says Anne Germain director of waste and recycling technology for National Waste & Recycling Association. She points to Agilyx whose technology worked, but the program shut down, a few years after launching because it could not produce enough revenue to sustain operations.

So there are questions for potential investors to ask.

“Some of the main ones are, ‘How much experience does the company have?’, ‘Has their technology been done full scale anywhere?’, ‘What is the feedstock?’, ‘How much pre-processing will be necessary?’ [and] ‘Are they charging tipping fees on inbound streams to generate revenue?,” says Germain.

PK Clean is working to raise $50 million and hoping to deploy facilities around the world. Its current funds would provide capital for about half a dozen projects in the pipeline, says Bakaya. She describes potential clients as mainly waste companies with fairly large streams looking to capitalize on the plastic they recover.

Sustane’s plan is to use about 30 percent of the diesel made with PK Clean’s technology to power its plant and to sell the rest locally as industrial light fuel oil, for marine transportation, and for residential heating.

There will be some residual material after the waste separation process is complete, representing 5 to 10 percent of the mass, which will be landfilled. But Vinall believes what will be disposed of initially will likely have a beneficial use in time, possibly as an aggregate for road building or construction.

“We assembled a set of technologies … in a unique way to give a cost effective, viable alternative to landfilling,” he says.