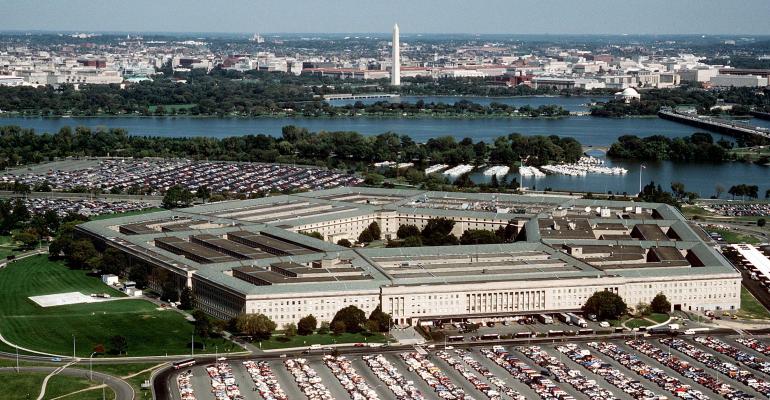 Individual branches of the DoD have partnered with industry on WTE projects and explored the feasibility of running their own projects.

In its quest to go further, while managing its solid waste, individual branches have partnered with industry on waste-to-energy (WTE) projects and explored the feasibility of running their own projects.

DoD engages in WTE projects for environmental benefits and public health benefits, but, says Heather Babb, Department of Defense spokeswoman, “If we can get heat, hot water or electricity in the process, that means less traditional fuel is consumed and less fuel-related logistical burden for forward-operating bases.”

The U.S. Army Corps of Engineers Engineering Research and Development Center Construction Engineering Research Lab (USACE-ERDC-CERL) partners with State University of New York at Cobleskill. It first created and tested a prototype, full-scale gasifier in 2012 and now plans to test an upgraded version of the system.

Waste is inserted into the reactor from the bottom and placed on top of a burning char layer where it quickly converts to syngas. It’s cleaned and introduced into a diesel generator.

“You start with waste at one end of the chain and end up with electric power at the other. The only air emission is the diesel exhaust,” says Stephen Cosper, environmental engineer for USACE-ERDC-CERL.

The goal of the upgrade, a project that has not yet started, is to accept any unsorted municipal solid waste (MSW), converting organic waste to syngas, while non-organic materials will exit with the ash.

As far as what the project will have to prove, Cosper says, “To me, a successful demo would mean the machine operates with minimal disruption over a period of months; air emissions are found to be acceptable and the automation system works.”

If the follow-up project proves out, says Cosper, “We hope to draw the attention of DoD equipment ‘project managers,’ various military commands or defense industrial contracts, who could fund replicates and sponsor more military testing. Also, this technology could be used at the municipal scale for bulk waste or perhaps unrecyclable rejects from a materials recovery facility.”

The U.S. Army Natick Soldier Research, Development & Engineering Center (NSRDEC) is currently prototyping three systems. They include a 2 ton per day WTE system intended for 600-man camps and two .5 ton per day systems for 150-man camps. They are designed for unsorted mixed solid field waste, which is similar to MSW.

“The goal is to provide a practical and efficient capability for onsite disposal of solid waste generated by small contingency bases, reducing or eliminating burn pits without requiring fuel-intensive small incinerators,” says Leigh Knowlton of the DoD Combat Feeding Equipment & Energy Technology Team. “Reduction of supplies going to, and backhaul from, contingency bases will reduce the number of vehicles required to be on the road.”

As a follow, a 10-ton rotary kiln was demonstrated at a base adjacent to Honolulu, Hawaii, also using multiple wastes.

Both the Illinois and Hawaii systems concluded testing in 2017.

“Due to the complexity of these systems and the projected operations and maintenance costs, the Air Force currently prefers power purchase agreements. These agreements allow private sector companies, which have the required expertise, to own and operate their own equipment, and then sell the power generated to an installation,” says Lt. Col. Robert McFarland, chief of the Acquisition Systems Support Branch in Air Force Research Lab’s Materials and Manufacturing directorate.

Other branches have launched projects over time, including a $20 million Marine Corps Logistics Base plant in Albany, Ga., to produce renewable electricity and steam from landfill gas—a partnership between the base, Albany, Chevron Energy Solutions and Dougherty County, Ga. And there have been other Navy projects including one in Jacksonville, Fla., which ran into problems producing a quality product and finding a purchaser of the fuel. The Navy has not been heavily involved in WTE projects as of late.

“We have found that, in most cases, Navy installations produce too little waste to make WTE economically feasible. We do, however, participate in public sector WTE programs where available,” says Navy spokesperson Ben Anderson.

Meanwhile, as they try and determine where to get their fuel, several branches have set their own renewable energy goals. The Army, Navy and Air Force each established goals of 1GW of renewable energy.