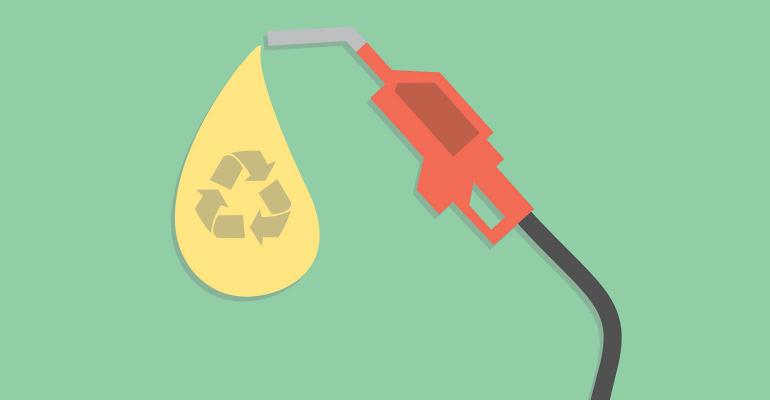 In terms of maturity, hydrogenation is at the demonstration stage. Key development areas for improvement include the understanding of catalysts for hydrogenation. Future generations of biofuels, such as oils produced from algae, are at the applied research and development stage, and require considerable development before becoming competitive.

Fossil oil refineries in Europe are facing overcapacity and liquidity issues which limit the profitability of the plants. Conversion to biorefineries allows the use of existing infrastructure for new revenue sources. Hydrogenation requires integration with an oil refinery to avoid building a dedicated hydrogen production unit.

The deployment of renewables or biodiesel depends on the interest of oil companies and refineries. For hydrogenation, there has been reticence due to potential technical risks associated with hydrogenation catalysts degrading.

Renewable diesel and biodiesel are transportation fuels that can differ in many key aspects, from the chemical processes used to produce them, the technologies employed, to the complexities of blending with conventional fuels.

They are produced in stand-alone plants, which include their own dedicated hydrotreating equipment and produce biodiesel that can subsequently be blended with conventional diesel from oil refineries, or in co-processing facilities. Co-processing plants use the hydrotreating capacity of existing conventional oil refineries, and produce a single, blended diesel output. This reduces the capital costs of the hydrogenation plant, but also reduces the refinery’s output of petroleum-based diesel.

Most of the biorefineries today are oriented towards renewable diesel production, targeted for road transportation. Nonetheless, many of the existing biorefineries and planned projects have the capacity to produce a mix of SAF and renewable diesel. As demand for SAF grows, driven by regulatory support as well as the industry’s desire to decarbonize, producers are likely to optimize their facilities for higher SAF production.

To date, ASTM International has approved seven alternative jet fuels (see Table 1) for blending, with conventional fossil jet fuel up to a certain limit under their standard D7655. 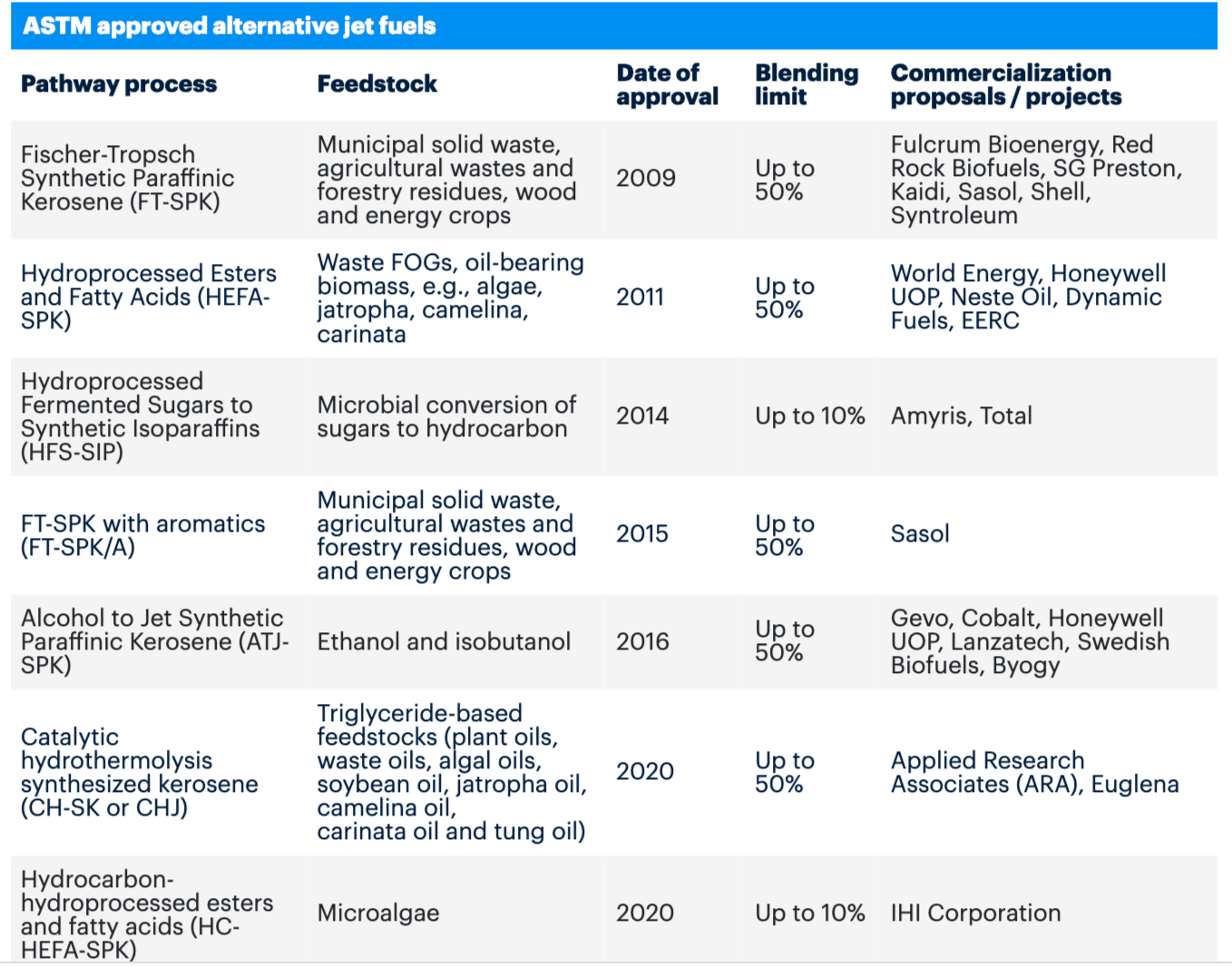 The production pathways of these approved jet fuels could be broadly categorized into i) oil-to-jet; ii) alcohol-to-jet; iii) gas-to-jet; and iv) sugar-to-jet.

The HEFA pathway is technologically mature and is already used on a commercial scale. It is currently the dominant production pathway, accounting for more than 80% of existing and planned SAF capacities, according to the ICIS Supply and Demand Database. The key producers include Neste and World Energy. The primary feedstocks for this conversion pathway today are waste fats, oil and greases (FOGs) such as used cooking oil (UCO). Other suitable feedstocks include vegetable oil and algal oil. The process involves hydrotreatment, hydroisomerization and hydrocracking, which is fundamentally the same refining process a conventional refinery uses to treat crude oil.

Catalytic hydrothermolysis (CH), also named hydrothermal liquefaction, converts plant or algal oil into biocrude, which can then be hydroprocessed, as with conventional crude, to produce drop-in fuels including gasoline, diesel and jet fuel. CH is not a mature technology and is yet to be deployed at a commercial scale. In 2020, Euglena Co started up a “first-of-its-kind” 5 bbl/day demonstration unit using the CH process to produce renewable diesel and SAF.

The alcohol is converted to hydrocarbon through a three-step process - namely dehydration, oligomerization, and hydrogenation. Currently, only aviation fuels produced from ethanol and butanol are approved by ASTM International. While alcohols can come from any source, in order to be sustainable, they should be waste-based or derived from non-food/feed sources. As such, feedstocks used in this process include lignocellulosic biomass (e.g. agricultural and forestry residues, and purpose-grown energy crops), municipal and industrial waste stream, and industrial flue gas from steel mills or other heavy industries.

The alcohol-to-jet production pathway is in the early stage of commercialisation. One of the leading players of this technology is LanzaTech, which in June 2020 launched a new company LanzaJet with contributions from multiple investors including Suncor, Mitsui, ANA, British Airways and Shell, to commercialize its alcohol-to-jet process. It has planned for a demonstration plant with an annual SAF capacity of 15,000 tonnes to be started up in Georgia, US, in 2022. Another key player Gevo has planned for a 100,000 tonnes/year SAF capacity in South Dakota, US, with production expected to start in 2024.

Biomass is gasified to produce syngas, which is a mixture of hydrogen, carbon monoxide and carbon dioxide. The syngas then goes through the Fischer-Tropsch (FT) synthesis process to form liquid hydrocarbons, including jet fuel. Feedstocks used in this process include municipal solid waste, agricultural wastes and forestry residues, wood and energy crops.

Gasification of biomass is still in the early stage of commercialisation, though the FT synthesis is a well-established technology and has been deployed for decades to produce liquid fuels from coal and natural gas. By 2025, only about 700,000 tonnes/year of SAF capacity via this pathway is planned for start-up. Key producers include Fulcrum BioEnergy and Velocys.

Syngas can also be produced using carbon dioxide as a feedstock. The process involves electrolysis using renewable electricity and combining hydrogen with carbon. The carbon dioxide can either be sourced from industrial plants, sustainable biomass (bioenergy carbon capture and storage), or direct air capture. The route is also known as power-to-liquid, which is a capital-intensive technology that is still in development. The clear advantage of this pathway compared with the others is the potential of having unlimited feedstock if carbon dioxide is captured from the ambient air.

Sugar undergoes a microbe-catalyzed fermentation to convert into farnesene, before undergoing hydrogenation to produce farnesane, which is a jet fuel blendstock. Deployment of this pathway is limited. There is only one commercial plant, with a capacity of 40,000 tonnes/year of farnesene in Brotas, Brazil. US industrial bioscience company Amyris had started up the plant in 2013, but in 2017 sold to Dutch specialties firm DSM. To achieve better sustainability, sugars should be derived from lignocellulose biomass, instead of edible crops such as sugar cane.

BioLPG, also called biopropane and renewable propane, is produced as a by-product from the renewable diesel (HVO) production process. According to SHV Energy, for every tonne of HVO, 50 kg of bioLPG is generated. BioLPG is chemically identical to LPG, but with a lower carbon footprint, meaning it can function as a drop-in fuel.

It is more expensive than conventional LPG, but the gap is not as wide between new and traditional fuels, as can be the case with other bio-based alternatives.

Production, Market Drivers
Material is produced through hydrogenolysis as a co-product in the production of biodiesel, usually from a mix of vegetable oils and waste residues.

The recent issuance of Renewable Transport Fuel Certificates (RTFCs) in the UK and market expectations of other governments taking similar steps, are significant drivers for market growth, although the space remains relatively niche at present.

LPG blended with renewable dimethyl ether (DME) is another option for reducing carbon footprint. Renewable DME is produced from a variety of feedstock such as waste from pulp and paper mills, forest products, agricultural residues, manure and municipal waste.

Europe is overwhelmingly the largest producer and market for bioLPG at present, followed by North America, with little change to that status quo expected in the near future.

It can be produced from methanol dehydration or from synthesis gas. LPG blended with renewable DME is being explored as a cleaner replacement for diesel and gasoline.

Bionaphtha is co-produced during the production of renewable diesel and SAF through hydroprocessing, co-processing or gasification/FT processes. It is essentially an identical replacement for fossil naphtha and thus can be used as a feedstock for the production of gasoline or a petrochemical feedstock for steam cracking (ethylene/propylene production) and benzene, toluene, xylene (BTX) production.

Bionaphtha is also a co-product of thermo-chemical bio-pathways, such as lipids hydrogenation (producing renewable diesel, HVO), that transform biomass via a breakdown and/or reconstruction/reconfiguration in hydrocarbons. Bionaphtha availability depends on that of the underlying thermo-chemical process.

Bionaphtha as a feed to gasoline presents a lower CO2 alternative to traditional gasoline. However, it still requires further processing in a refinery and blending with other components to make a finished specification product. Bionaphtha is also produced by hydrotreated fats and oils besides wood-based raw materials, including crude tall oil, which is a natural wood extract of mainly softwood origin.

As a feedstock to petrochemicals, it represents the ideal building block on the way to a more circular economy, as an immediate drop into feedstock to produce a renewable petrochemical. If that product can be ultimately coupled with recycling of the finished plastic, the environmental impact becomes a fraction of fossil-based production.

Production globally is estimated to be less than 500,000 tonnes/year, with Neste producing bionaphtha from its Singapore refinery since 2012, while UPM and World Energy are also leading marketers. However, the swathe of new renewable diesel and jet fuel projects at a large scale are likely to bring a significantly higher amount of product to the market, potentially tripling supply in the next five years, although this is still less than 1% of the global naphtha market, according to the ICIS Supply and Demand database.

Editor's Note: This is part two in a two-part series that analyzes the market for biofuels. Read part one here.