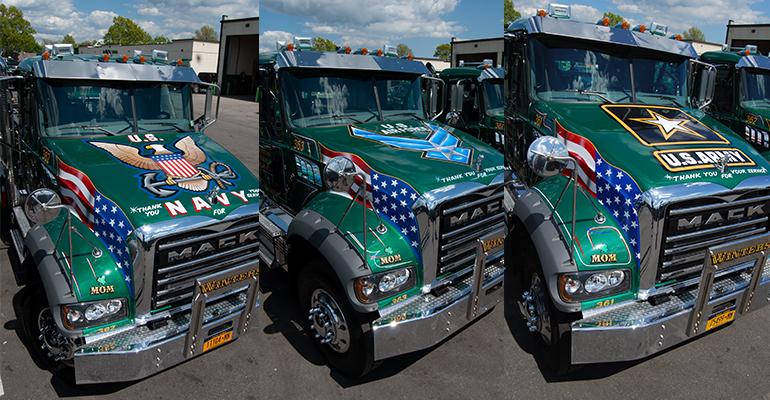 The company is recognizing the men and women of the U.S. military and paying tribute to those who served.

Winters Bros. Waste Systems of Long Island, N.Y., is observing National Military Appreciation Month (NMAM) and encouraging all U.S. citizens to observe the month in a symbol of unity.

In tribute to all current and former members of the U.S. Armed Forces, including those who have died in the pursuit of freedom, Winters Bros. is displaying the logos of the Army, Navy, Air Force and Marines on four new trucks.

“This special tribute honors those who have served our great country,” said Sean Winters, vice president of Winter Bros., in a statement. “Each truck is painted with the logo of the branch of the military and special slogans and colors that are unique to the branch of service. We are fortunate to live in a great county where so many people have fought to preserve and protect our freedoms. Winters Bros. is honored to pay tribute to the men and women who have served.”

Each truck is a new Mack Truck that was manufactured in Allentown, Pa. The trucks will join the Winters Bros.’ fleet of more than 250 trucks on Long Island. Some of the other trucks are painted with various patriotic themes including “Never Forget” (a tribute POW-MIAs) and the “9-11 Twin Towers” tribute. Other trucks have a lighter and more entertaining theme including Spiderman, Batman, Superman, the Hulk and Star Wars. All trucks operate across Long Island.

In 1999, Sen. John McCain introduced legislation to designate the month of May as National Military Appreciation Month. Both the Senate and House of Representatives adopted resolutions calling for Americans to recognize and honor U.S. service members during the month.